The pagoda was visited by Kyaing Kyaing (wife of Snr-Gen Than Shwe), who donated an ornament and in a ceremony on May 7 witnessed its placement on the top of the 170-foot (52-meter) pagoda. 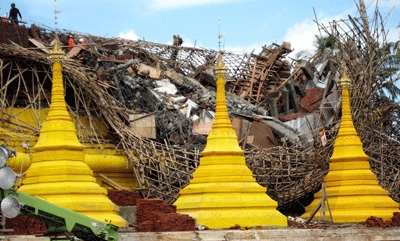 Residents said the authorities have used bricks from the pagoda to pave roads in Danok village, but many people are unwilling to travel on the roads and avoid them, residents say.

“The villagers dare not to step on them. They keep away from the road,” said a villager.

An official of Dalla Township said it has received no instructions from the Religious Affairs Ministry and Rangoon Division PDC on what to do about the pagoda.

“I can’t say anything. I am not sure whether the pagoda will be rebuilt or not,” he said. Burmese government’s official TV reported that the accident was due to poor quality workmanship as well as structural flaws. It said another reason for the accident was that construction work had been done in haste because some of the people who donated for the repairs wanted the project completed before seasonal heavy rains.

However, the collapse of the temple was widely seen as something more significant than shoddy construction work in superstitious Burma. Many local residents claim the pagoda has miraculous powers and its collapse was related to people’s displeasure with the military regime.

Many residents reportedly witnessed weird events, such as total darkness, red-fireballs and other phenomena after the pagoda collapsed. Astrologers speculated that the junta could be vulnerable of collapse.

After the collapse of Danok Pagoda, Snr-Gen Than Shwe and his family went to Shwe Dagon Pagoda in Rangoon to donate pagoda-shaped flowers in what many believed was an effort to avoid bad karma.

Resident claimed that the collapse caused at least 20 deaths and 150 injuries, but authorities said two people died and 34 were injured. Authorities said the pagoda collapsed because of the weight of the structure and faulty renovation methods. Portions of the pagoda had shown signs of collapse in 2006.

The Pagoda Trusteeship Committee said it would take at least five years to rebuild the pagoda.

According to oral history, Danok Pagoda was built some 2,300 years ago. The pagoda was worshiped and renovated by powerful Burmese and Mon kings.
Irrawaddy org