Mon 28 Sep 2009, IMNA, Rai Maraoh
The new Mon group, calling itself the ‘working committee’ has been organizing Mon people in advance of a potential move to become a full fledge political party prior to the 2010 election.

While not yet a political party, the self titled ‘working committee’ has been building a potential support base, organizing Mon people from 2 states and 2 divisions.

“The main point of our organizing people has been to we explain the current political situation and discus about 2010 election,” said a member from the ‘working committee’. “We explain how we need the party for our Mon people.”

In advance of the 2010 election, the ‘working committee’ has already recruited the support of at least 30 people in 1 township. While they are working to increase their support base, according to sources the group members will report in on the success they have had thus far, at their monthly meeting.

Committee members have cited two primary concerns that have thus far kept them from announcing their status as a genuine political party. Party members hope that the Burmese government will review the 2008 constitution, to ensure guarantee a free and fair election. END_OF_DOCUMENT_TOKEN_TO_BE_REPLACED 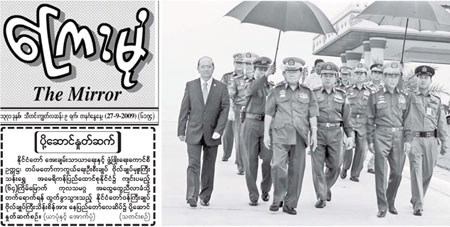 The Assistance Association for Political Prisoners (Burma) (AAPP) today strongly condemned the widespread ongoing use of torture against political detainees in Burma.

New testimony from political prisoners released under a general amnesty in Burma last week underlines the systematic patterns of abuse and torture of political detainees. In an interview with exile media group Democratic Voice of Burma, former student leader Myo Yan Naung Thein, who was arrested in December 2007, described being kidnapped by unknown assailants, hooded, and taken to an unknown location where he was brutally beaten. He was also denied proper medical treatment and is now unable to walk as a result.

According to AAPP, 128 political prisoners were released under the latest amnesty. But high-profile political prisoners like labour activist Su Su Nway and comedian Zarganar were not amongst those released.
Both suffer from serious heart conditions and have not received adequate medical treatment in prison.

AAPP Secretary Tate Naing said, “Denial of medical treatment is also a very cruel form of torture. For those political prisoners who are in poor health, it is a kind of death sentence.”

So far this month, AAPP has documented the arrests of 36 activists in Burma, including three monks. Those arrested include well-known individual activist and US citizen Kyaw Zaw Lwin also known as Nyi Nyi Aung, detained on 3 September on his arrival at Rangoon International Airport. He was taken to various different interrogation centres where he was kicked and beaten, deprived of food for seven days, and questioned throughout the night. His request for medical treatment for his injuries has so far been denied. END_OF_DOCUMENT_TOKEN_TO_BE_REPLACED

Obama keen on Asean-US summit
has confirmed to Prime Minister Abhisit Vejjajiva that he would like the first ever Asean-US Summit to take place in Singapore later this year.

The two leaders met prior |to the G-20 Summit session |on Friday at the David L Lawrence Convention Centre in Pittsburgh, Pennsylvania.

“It will commemorate the most productive and enduring relationship Asean has with its dialogue partners,” he said, according to a source attending the meeting.

Thailand currently holds the Asean chair and the PM was representing the grouping at the G-20 Summit.The source said the US |president had also informed Asean Secretary-General Surin Pitsuwan, who was accompanying Abhisit, that he would like |to see US-Asean engagement becoming even more productive and meaningful in all areas.

This came one day after US Secretary of State Hillary Clinton made public at a Friends of Burma meeting at the United Nations that there would be a review of US-Burma relations.

“The president appears to be very keen and very clear about his desire to see our partnership moving onto a higher plane. That is very encouraging and gratifying indeed,” said Surin when asked via e-mail about Obama’s comments to Abhisit.

Since the Asean meeting in Phuket in late July, Asean and US diplomats have been engaged in a frenzy of activity to improve the Asean-US dialogue partnership, which is 32 years old.

A new momentum toward better relations has gained pace since the new US administration came into power in January. Clinton’s visit to the Asean Secretariat in Jakarta in February – the first ever by a US secretary of state – promised a reversal in the long-standing US low-profile engagement with the grouping.

The US in July signed an agreement to accede to the Asean Treaty of Amity and Cooperation after 17 years of consideration. The accession has increased mutual confidence between Asean and the US. continue
http://www.nationmultimedia.com/2009/09/27/regional/regional_30113144.php

The agricultural plantations of 4 migrant workers who gave their details to the Burmese authorities in order to get a passport were confiscated a week ago.
The plantations, located in Burma are owned by migrants living in Thailand and were confiscated by the Burmese authorities. Ma Aye Hlaing who works in Surat Thani described how this happened, “I made call to my friend, 4 of them including Ma Mi Win owned gardens had been confiscated that what I knew. Due to making passport process and that have to give your Burma address detail and when authorities know the owners are working at Thailand and asked Tax for the lands. For those take care the land cannot pay tax and so those land had been confiscated. Many now tried to communicate to their families members who working in Thailand. At the beginning they thought passport making process is good but now knowing it was really bad. One of them a little bit clever and reply through parent that, cannot pay Tax for the moment but will absolutely return before 2010 election so her land is pardon from confiscation”.
Many migrant workers residing in Thailand have invested money in gardens and farm lands in Burma so they can have a secure livelihood if and when return from Thailand.
Ma San from Jaktaw village who is also aware of this situation said; “My elder brother from village phoned me. The government servants came and asked for Tax. We, the families here would face trouble. Don’t tell parents name, exact address. 4 gardens now been confiscated. Don’t make the passport if you are not sure; he said. We are filled all correct data so we are now in trouble”.
Ko Ah Naing originally From Thayetchaung village, Burma said; “the township authorities came down to our village and told that for those people who made passport would ask to return for voting. All of them must return, if some of those not return, their homes and lands would be confiscated. 35 of us including me here in our work already applied for passport and we all now are worry. Our parents, brothers and sisters from village phoned and told us.”
This land confiscation, coupled with the previously documented arrests of migrants applying for passports is leading to widespread fear and unrest in the Thai Burmese migrant population.
http://www.ghre.org/en/

BANGKOK, Sep 28 (IPS) – Burma’s monks are silent but seething with anger two years after the brutal state crackdown on their revolution.
Although Rangoon, the South-east Asian state’s former capital, is relatively quiet at the moment, there is widespread simmering discontent that could erupt again at any time into anti-government protests. “While we cannot say anything in public, in the privacy of our own homes, we remember how the army treated the monks two years ago,” said Aye Win, a retired school teacher in Rangoon.

“We were shocked. The monks are the most trusted and revered people in our society, so we can never forget how the military treated them with such utter disdain,” he added.

The memory of the monks marching and the bloody crackdown is still fresh in many peoples’ minds. “We really feared for them when they took to the streets, but we never believed the generals would attack them so viciously,” said Min Thu, a taxi driver in Rangoon.

The events of September 2007 were a traumatic experience for most ordinary Burmese.

The anti-government protests started as small demonstrations in mid-August against rising food and fuel prices organised by the leaders of the ‘88 Generation Students Group’, who had been prominent during the mass pro-democracy demonstrations in August 1988. But these exploded into a major mass protest when the saffron-clad monks took the lead in what became known as the ‘Saffron Revolt’, a moniker coined from the color of their robes. In late September 2007, the military junta began a massive crackdown on the protesters. END_OF_DOCUMENT_TOKEN_TO_BE_REPLACED