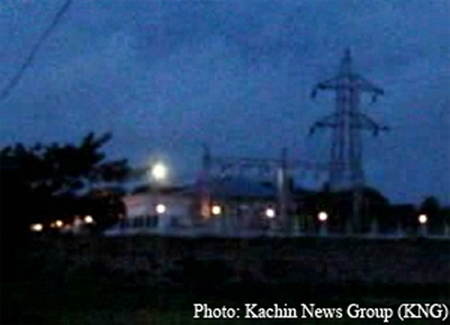 KIO’s Buga Company had supplied power to Myitkyina, the captital of Kachin State since July, 2006.

People in Kachin state capital Myitkyina in northern Burma are going without electricity for a week now because power supply lines to the Kachin Independence Organization (KIO) territory was destroyed by the Burmese Army, said KIO officials.

The power supply cables were destroyed deliberately by artillery fire in Ga Ra Yang village on Nov. 1 at about 4 p.m. local time by Burmese Army troops during their military offensive against the Kachin Independence Army (KIA) under the KIO, said KIO officials.

La Gun, an eyewitness and People’s Army commander under the KIA in Ga Ra Yang battle zone told Kachin News Group, “They (Burmese troops) intentionally damaged power poles between Lung Zep Kawng and Ga Ra Yang with artillery fire. They pretended as though the power poles were destroyed, while fighting the KIA, when actually it was deliberate”.

On June 12, the KIO ordered the complete closure of its liaison office in Myitkyina and the Buga Co. Ltd. for reasons of security, but the power supply was unaffected to Myitkyina and Waingmaw.

Operated by KIO’s Buga Co. Ltd., the Mali power plant has been supplying 2.4 MW of electricity daily to Myitkyina and Wiangmaw towns since July, 2006, according to a KIO report.

When the plant is fully operational, it can produce 10.5 MW of electricity, said the KIO report.

The Buga Company has not been able to repair the damaged electric poles yet because fighting continues.

Chiang Mai (Mizzima) – A power cable at the Mali Stream Hydropower Station owned by the Kachin Independence Organization [KIO] has been cut since Tuesday and could take a week to repair, according to an official of the Buga Company.

The cable provides electricity to Myitkyina and Waimaw.

The KIO alleged that the government was responsible for the severed cable, and that it could have occurred during a recent movement of troops and supplies.

“They cut the power line by bullets,” said La Nang, a KIO spokesperson. “And the power line was cut at Lonzak Hill which is controlled by the government. Then they sent troops to the front. They deployed extra troops within a short time.”

The KIO’s Buga company has provided electricity to Myitkyina and Waimaw since 2006. The Tabak Stream Hydropower Station generates 9.8 megawatts of electricity.

On Wednesday, the government deployed extra troops from Brigade No. 88 to Myitkyina, crossing the Irrawaddy River during the evening, La Nang said.

On June 12, the KIO recalled its employees from the liaison office in Myitkyina and the Buga Company for security reasons, but it continued to provide electricity to Myitkyina and Waimaw.

DKBA Brigade 5 leaders, including Brig-Gen Saw Lah Pwe (black shirt), pose for a photograph at a base in eastern Burma. (Photo: The Irrawaddy)

Saw Lah Pwe told The Irrawaddy on Friday that he signed a ceasefire agreement with a Burmese delegation on Thursday. He said that fighting had stopped and some government troops that previously were deployed on the frontlines had begun to withdraw from areas controlled by DKBA Brigade 5.

“I think they really want to make a ceasefire with us at this moment. Some of the representatives are Burmese officials from Naypyidaw,” said Saw Lah Pwe.   END_OF_DOCUMENT_TOKEN_TO_BE_REPLACED

Families of long-term sentenced Shan leaders: Khun Tun Oo and 7 others have lodged a petition with the National Human Rights Commission, with copy to UN special rapporteur Tomas Ojea Quintana, to conduct a legal review of their cases. The 8 were detained in February 2005 and sentenced from 79 years to 106 years for treason, defamation of state and other charges. (VOA)

Leaders of Burma’s ethnic Karen minority are appealing for international help against what they describe as increasingly fierce government attacks.

In a formal request Thursday, leaders of the Karen National Union urge the United Nations and the world’s democratic countries to bring increased pressure on the Burmese government of President Thein Sein.

In particular, they say the government should be pressured to stop sending troops into battle against the minorities, to seek a political solution to the country’s ethnic conflicts and to allow humanitarian organizations to help those affected by the fighting.

The KNU also urges the international community to seek ways to protect the security and rights of the minorities, including the Kachin and Shan peoples as well as the Karen.

A longstanding cease-fire between the government and minorities broke down when the ethnic armies refused to join a government border force, and Burmese troops went on the offensive this year against Kachin and Shan strongholds.

The KNU says more than 20,000 people have been forced to flee for their lives and that numerous human rights violations have been committed, including rape, forced labor and the use of children as human shields.

The organization says the ethnic minorities are ready for dialogue with the government, but that a letter to the president in July has been answered only with increasingly fierce attacks. VOA news

All Burma Students’ Democratic Front (ABSDF) commemorated 23rdanniversary of its founding at Lahkum hill in Shait yang, near KIO’s headquarter Laiza on Nov 1, 2011. ABSDF was founded in November, 1988 after students-led widespread unrest in Burma. Many students were being forced to flee their homes after uprising to escape arrest and torture by SLORC. ABSDF has operated particularly in KIO and KNU controlled areas since 1988.

An opening prayer service for a new ABSDF’s northern command headquarter was held at 7:30 am. More than 200 people including KIA’s joint chief of staff attended ABSDF’s 23rd anniversary ceremony which was held at 10:00 am.