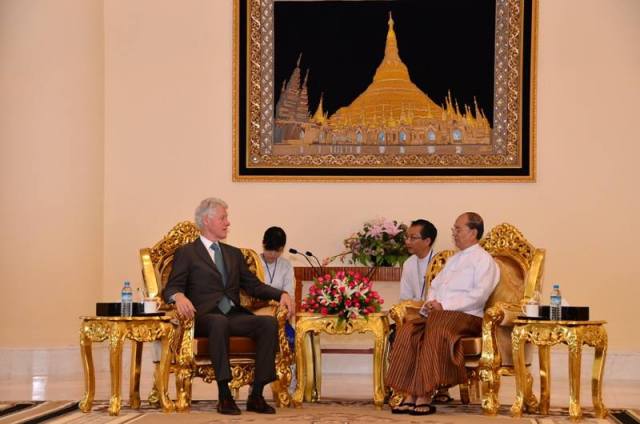 In meeting with ethnic Rakhine and ethnic Kaman townselders at Annawa Hall in Thandwe this morning, President U Thein Sein said he was there to observe regional development and rehabilitation undertakings as he was confident that peace and stability returned to Rakhine State and to lend a helping hand to the tasks by the Union government.

Some conflicts erupted due to a trivial argument that sparked riots later in Thandwe Township when he was in Sittway, MraukU, Kyauktaw and Maungtaw.

He added he was suspicious of the motives, commenting that whether problems synchronized with his visit to the state.

He continued that no winner in the more than 60-year-old armed conflicts in the country. It begot a great loss to the country. So, negotiations are in progress and all stakeholders are trying hard to resolve the conflict through political dialogue.

Violence with the attempts of turning the trivial argument and ordinary crime into racial and religious clashes are unacceptable.

As violence escalates the conflict, not an answer to resolve the problem, ways and means should be sought through the process of negotiations.

Ethnic Rakhine and ethnic Kaman have been living here in peaceful coexistence for many years.

External motives instigated violence and conflicts. According to the evidence in hand, rioters who set fire to the villages are outsiders. Participation of all is needed to expose and arrest those who got involved in the incident and those instigating the conflict behind the scene. Only then can root cause of the problem be addressed. The government  will use all ways and means vested by the Constitution for restoring peace and stability and ensuring the rule of law in Rakhine  State. Action will be taken in accord with the law, without discrimination on the grounds of race and religion. Situation in which the people on both sides are fearing for their safety and worrying about unrest is unacceptable. Conflicts retarded the economic development of Rakhine State.

As capital and other resources for regional development tasks went to rehabilitation works, a great loss happened to the region. The recent conflicts tarnished the image of the nation and its people when Myanmar has earned international recognition for its sweeping reforms. There is no development without peace and stability.

The President called on townselders to teach the youth not to be deceived by instigators and to take necessary measures for avoiding recurrence of conflicts.

The President called on local people to take part in the task of ensuring peace and stability and rule of law as plans will be formulated by the government for the development of hotels and tourism sector in Thandwe including Ngapali, a well known beach in the world.

Next, the President met with hoteliers in Thandwe. At the meeting, Union Minister for Hotels and Tourism U Htay Aung reported on tourist arrival in Myanmar and plans to build Thandwe Hotel Zone and to carry out beautifying tasksfor Ngapali.

Then, the President explained the government’s plan for the development of Ngapali beach in cooperation with entrepreneurs and local people and cordially greeted the hoteliers.

The President and party left Thandwe for Nay Pyi Taw by special flight. 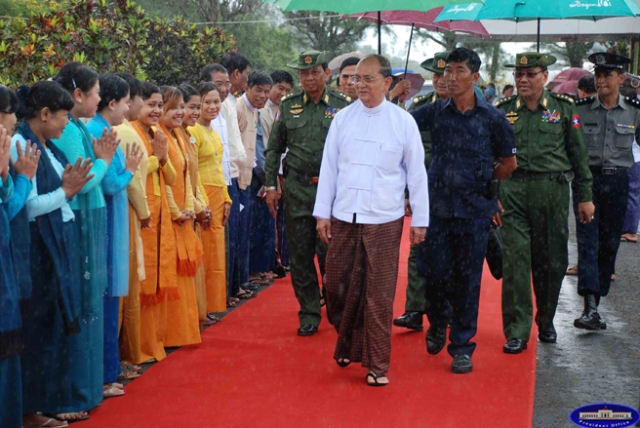 Myanmar’s Parliament has rejected a proposal by President Thein Sein to delete a clause that requires members of a new anti-corruption commission to declare their assets.

The rejection of the president’s amendments to a new Anti-Corruption Law, under which the commission is to be established, was made during a parliamentary session held in Nay Pyi Taw on Monday.

President Thein Sein argued that the clause requiring members of the anti-corruption commission to submit a list of their personal property and wealth should be deleted as it went against Myanmar’s 2008 Constitution.

An official from Union Assembly’s Joint-Bill Committee however pointed out that the provision was already a requirement in the Union Government Law. 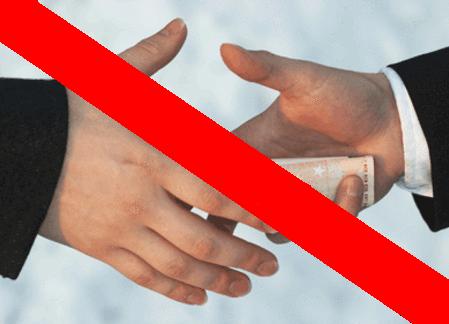 “The Union Government Law states that those appointed by the president for the formation of a commission with a parliamentary approval must send the lists of their assets to the president,” said the official.

“Commission members, who will be vested with power to eliminate bribery and corruption, should demonstrate transparency in improving the country’s executive sector,” he added.

Parliament rejected the presidential remark amid public criticism that the cabinet members are accumulating more wealth and possessions compared with their salaries. 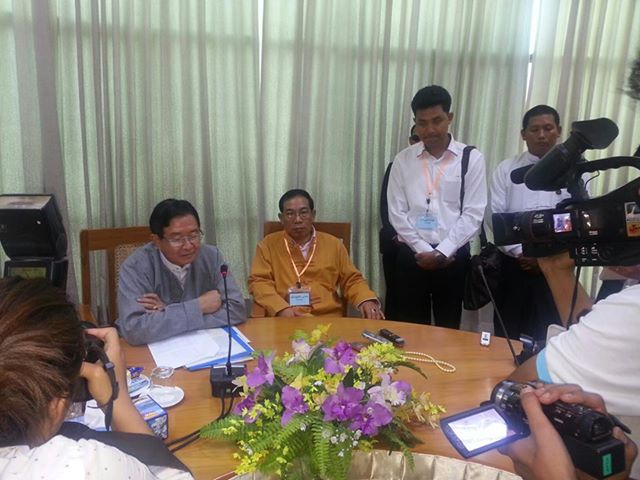 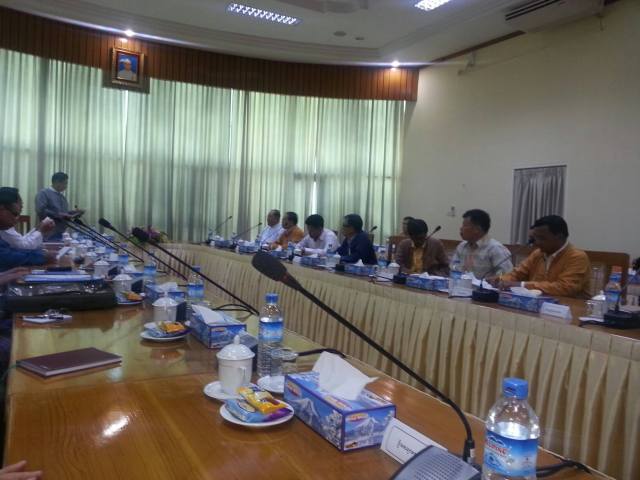 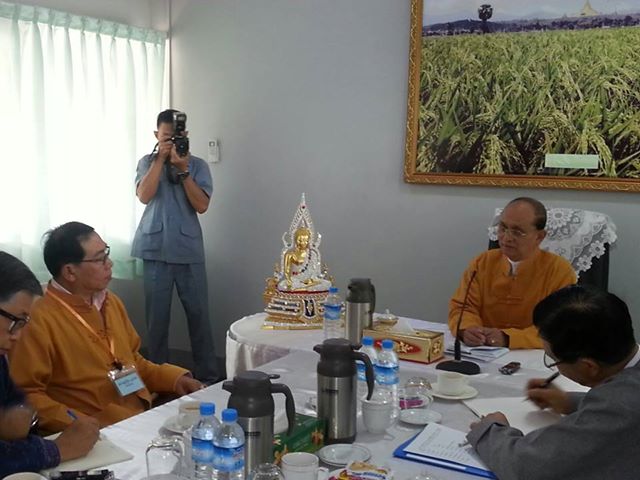 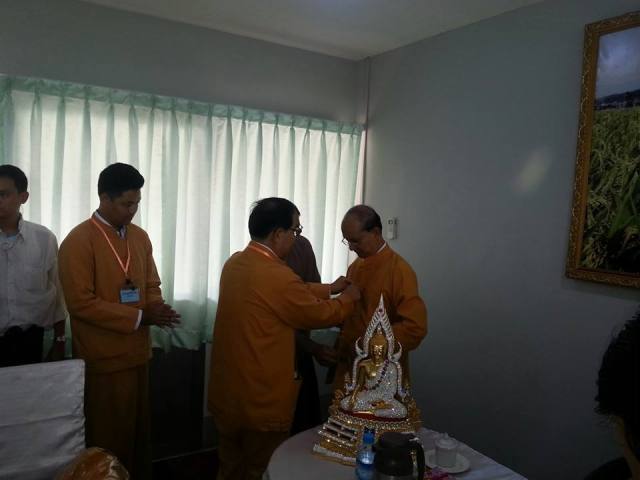 MRTV 22.MAY 2013 May 22, 2013 5:51am
Historic leaders had meeting in Washington. After (50) years Gap in bi-literal ties between U.S and Myanmar, President U Thein Sein made official meeting with President Barrack Obama, Former States’ Secretary Hilary Clinton and Governor of World Bank on Monday in Washington

Importantly, the military’s role in the 2015 national elections could determine the future of political and economic reform.

The question is whether the United States should refuse to engage and roll the proverbial dice, or engage and try to support good decision making by Myanmar’s military leaders. (Murray Hiebert is senior fellow and deputy director of the Sumitro Chair for Southeast Asia Studies at the Center for Strategic and International Studies in Washington, D.C. ) 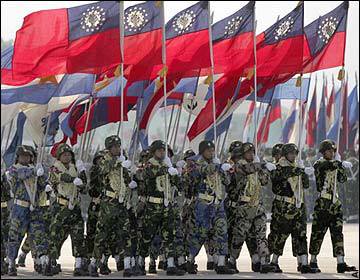 The United States should move forward with prudence and clear expectations about its military engagement with Myanmar. This would give encouragement to officers who want to follow the example of the Indonesian military, which gradually eased out of politics after the toppling of President Suharto in 1998. Exchanges could help the military recognize that there will be no real political solution to the country’s ethnic conflicts until the government considers increased power- and resource-sharing.

When Myanmar president Thein Sein visits Washington next week, President Barack Obama should arrange for him to make a trip to the Pentagon. Myanmar is a key member of ASEAN, wedged like a keystone between China, India, and Southeast Asia. This strategic value means that the United States shares with Myanmar an interest in professionalizing that country’s military.

Thein Sein, a retired, and by most accounts clean and honest, general-turned-reformer would feel comfortable interacting with senior U.S. military officers and Secretary of Defense Chuck Hagel. U.S. officers could reinforce the administration’s thinking about what more Myanmar needs to do to achieve full normalization of relations and restore military-to-military ties between Myanmar and the United States.    http://csis.org/publication/president-obama-should-invite-myanmars-president-visit-pentagon

We must recognize the important role of Myanmar military during this democratization process. Under the past system, Military took charge of the nation’s stability from security point of view. Now, we are in the process of reforming the Military for its role in the democratization and peace building processes.
ႏုိင္ငံေတာ္သမၼတႀကီးရဲ႕ ဂၽြန္ေဟာ့ပ္ကင္းတကၠသိုလ္ မိန္႕ခြန္း (အျပည့္အစုံ)
=========================================There are many people in Myanmar who opposed the ongoing reforms as they see their interest being threatened, says President Thein Sein.

Ladies and Gentlemen,
It is a great pleasure for me to be here today and I am extremely grateful to Dean Vali Nasr for his kind invitation for me to speak at the Johns Hopkins School of Advanced International Studies as part of my first visit to Washington.
I know that the ties between Johns Hopkins and SAIS in particular with Myanmar are more than half a century old. The Hopkins Rangoon Center was established in 1954 as a leading educational and research institution in Asia and over the years dozens of Myanmar students have been educated at SAIS, including several current senior diplomats and a member of my own advisory council.

I hope very much that we will be able to reestablish the strong connections that once existed.

I am pleased to be here and I am especially pleased to be able to speak to you at this time on Myanmar’s transition, its vision of the future, and its vision for the future partnership with the United States and the American people.

The past two years under my government have been a time of transformation in Myanmar. Military rule was ended, a new constitutional was put into effect and we have begun a series of political and economic reforms that we hope will build a strong democracy and a strong market-oriented economy. At the same time we are working to peacefully end the armed conflicts that have plagued our nation since independence in 1948. And we are trying hard to end Myanmar’s isolation, see the removal of all sanctions, and make the contributions we can to both regional and global security and development. 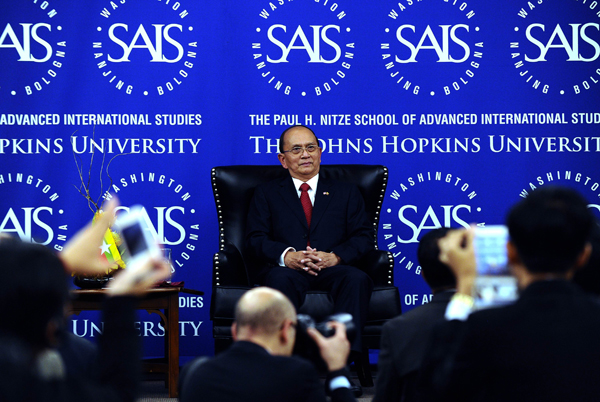 I believe what we are trying to achieve in Myanmar is quite unprecedented. We are transitioning from an authoritarian regime to a democratic one and from a centralized economy to one based on a free market. At the same time, we are engaged in a political dialog process and national reconciliation. We are also reengaging with many governments and international institutions for the first time in decades, all under the burden of remaining economic sanctions.
END_OF_DOCUMENT_TOKEN_TO_BE_REPLACED

Chairman of National Disasters Preparedness Central Committee Vice President U Nyan Tun and officials from the Management Committee are going to make close supervision based in Ann of Rakhine State starting from the 14th.
Military aircrafts, helicopters, vessels and vehicles are getting ready for evacuation and medical teams and other supportive teams were also formed. 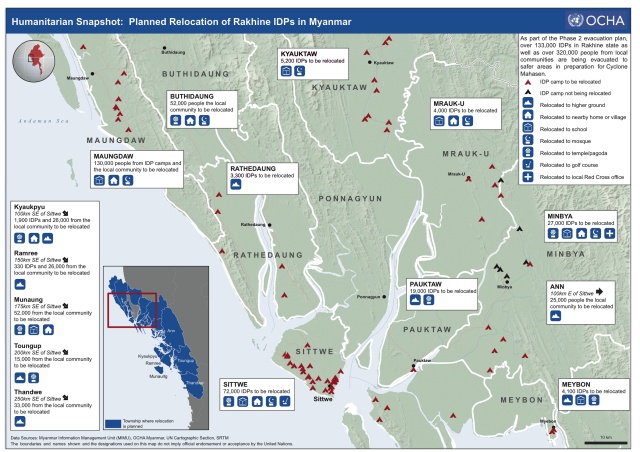 “Natural disaster is unpreventable. It needs to overcome the disasters with least damages through preparedness,” President U Thein Sein said at the coordination meeting for  Cyclone Mahasen held at the meeting hall of Union government at the Presidential Palace here this morning.

It was also attended by Vice-Presidents Dr Sai Mauk Kham and U Nyan Tun, the Union ministers, deputy ministers and departmental heads.

In his opening speech, the President said that the news on the Cyclone “Mahasen” is likely to cross between the west coasts of Rakhine and Bangladesh on 15 and 16 May, has been released. It is difficult to predict the storm as it can turn to the low pressure areas. Myanmar had experience of the storm “Nargis” hit in Ayeyawady Region on 2 May, 2008.

Necessary preparations are being made as the direction of the storm “Mahasen” is likely to turn to other states and regions. Officials have been instructed to carry out necessary preparedness in Magway Region. 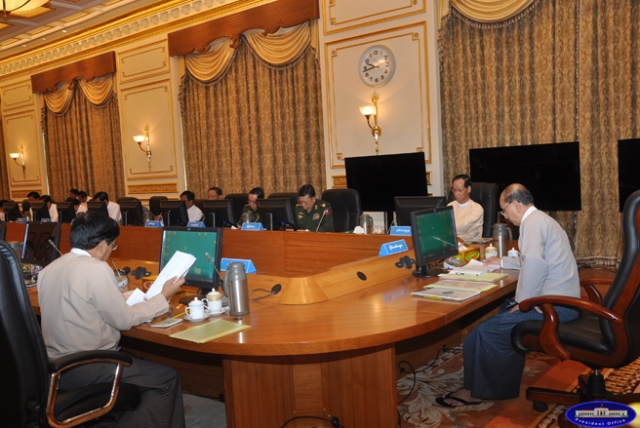 There are four-step measures: preparedness  before the storm, tasks during the storm, recues and relief and rehabilitation after the storm.

It needs to carry out systematic measures. After the storm “Nargis”, National Disaster Preparedness Central Committee and work committee were formed and standing orders have been issued.

Maungtaw and Sittway in Rakhine State are most disaster-prone areas. There are over 100,000 victims in Sittway, Myebon, Pauktaw and Kyaukpyu townships. Among them, 40,000- 50,000 victims are in Sittway. Some victims are living at makeshift camps while others have been moved to the safe buildings. END_OF_DOCUMENT_TOKEN_TO_BE_REPLACED 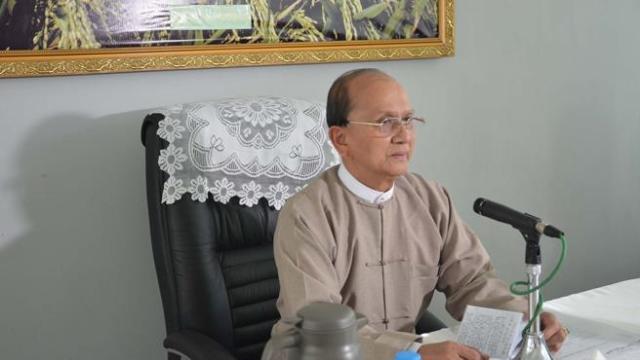