A top drug fighter from Naypyitaw recently challenged Beijing’s claim that “frequent occurrence of drug-related crimes on the Mekong River has been effectively contained,” as reported by Xinhua last May.

“In fact, the situation has become worse since Naw Kham’s arrest (on 24 April 2012),” said the official who asked his identity be withheld. “And Naw Kham was but a small link in the drug chain.”

Naw Kham, known as the Mekong godfather, who since 2006 was the boss over the cross-border drug trade in the Golden Triangle area, was executed in Kunming by lethal injection on 1 March. He was convicted on several charges including the killing of 13 Chinese sailors, on the Mekong on 5 October 2011. 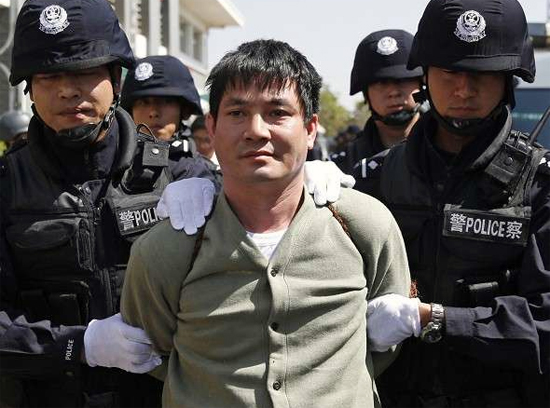 A veteran businessman in eastern Shan State supported the drug warrior’s statement. “The only people who are taking a back seat nowadays are those without independent networks of their own,” he explained. “But to those who have their own networks Naw Kham, who was collecting protection on the fruits of their labor, was a great nuisance. The news of his capture was therefore most welcomed by these people.”

The drug fighter also scoffed at the much-vaunted joint 4-nation patrol on the Mekong. “Cooperation? Yes,” he told SHAN. “But joint operation? No.”

A ceremony to mark the opening of the office to control what Xinhua reported as “joint anti-drugs operations” on the Mekong was held in Xixuangbanna, Yunnan Province on 19 April. Myanmar and Thai police have arrested more than 1,100 suspects and seized more than 2.97 tons of drugs announced China’s Ministry of Public Security on 29 May. END_OF_DOCUMENT_TOKEN_TO_BE_REPLACED

10.may 2012 Naw Kham, Mekong godfather, captured in Bokeo on 25 April, handed over to Chinese officials by Laotian authorities in Vientiane this morning.(CCTV)

A month after the brutal killing of 13 Chinese crewmen took place in the Golden Triangle, where Burma, Laos and Thailand meet, Lt-Gen Yawdserk, leader of the Shan State Army (SSA) ‘South’, that operates in Shan State East, has offered to lend a hand in the long term solution of the maritime security issue on the Mekong.

“Security on the Mekong rests upon law and order in the three Triangle countries,” he told SHAN during a telephone interview. “If one looks carefully, it is not hard to find that the Burmese side is the weakest link due to instability since Independence (in 1948).”

The failure of successive Burmese rulers to honor the 1947 Panglong Agreement which guarantees self rule, democracy and human rights and their refusal to back off from the military solution, he said, had left no choice for the people of Shan State but to engage in an armed struggle. “What happened in the Golden Triangle (on 5 October) was the consequence of the resulting anarchy,” he explained.

President Thein Sein, the head of the new government, had called for peace talks with the armed movement on 18 August 2011. So far it has achieved success with three of the groups: United Wa State Army (6 September), National Democratic Alliance Army (7 September) and Democratic Karen Buddhist Army (3 November).

It has however yet to meet the leaders of the SSA, whose troops are active in Mongyawng township, north of the Golden Triangle.

Arrangements are still in process before the two sides meet, according to inside sources.

“If both sides can reach a mutually acceptable political agreement, it will pave the way for end to anarchy in the area,” he predicted.

China has bought 5 ships that will be refitted for the patrolling of the Mekong, according to Bangkok Post, 10 November issue, quoting a Chinese Ship-owners Association. Beijing however has said the plan needs to be discussed with its downstream neighbors first.

TUESDAY, 18 OCTOBER 2011 17:09 STEPHEN PERRAUD / HSENG KHIO FAH
Hoping to end current speculation over possible involvement in the 5 Oct. incident on the Mekong River that led to the discovery of 12 deaths and the seizure of 920,000 yaba (methamphetamine) pills on two Chinese cargo ships, Mongla NDAA official Sao Hseng La adamantly denied any connection between his organization and both the murders of the crew and drug trafficking discovered Tuesday. An anonymous official with the United Wa State Army (UWSA) also denied any involvement in the incident.

The 12 bodies of ship crew members were discovered after a shootout on the river between hijackers and Thai authorities. The crew members had been blindfolded, had their hands tied behind their back, and were either shot or had slit throats. Details have yet to emerge about the characteristic markings of the drugs seized on board. The estimated street value (in Tachilek) of the pills seized is Baht 46 million ($ 1.5 million).

Signature markings are often imprinted upon yaba pills, indicating specific regions or organizations of origin. One known marking is the “WY” imprint often associated with the production of yaba by UWSA related manufacturers.

Yaba with UWSA related origins has also been identified as hard in consistency, high in quality, and having a distinct smell. However, imitations of the “WY” imprints have also been noted, as other manufacturers have hoped to pass off their inferior product as the UWSA’s. END_OF_DOCUMENT_TOKEN_TO_BE_REPLACED

The home in Maesai, opposite Tachilek, of Jamras Phacharoen, better known as Pu Nuad (“Moustache”), believed to be a close associate of Naw Kham, head of the protection racket in the Golden Triangle, was raided by joint Thai and Burmese officials yesterday, according to sources from the Thai-Burma border.

It was reportedly in connection with the drug bust in Laos’ Kings Romans Casino on Monday, 26 September, by Laotian and Chinese officials. The operation had netted 20 sacks of drugs, B 50 million ($1.7 million) and a number of suspects including 6 Thais, according to Thailand’s deputy prime minister Chalerm Yubamroong.

The said Thais were said to be followers of Pu Nuad, who had also been running the gaming operations at the casino.

Pu Nuad, about 58, is a native of Maesai. He is married to a Shan, a native of Kengtung’s Mongyang township. He is also the chairperson of the Chao Khrua Tai (Tai Race) Society.

The officials did not find him at his home in Tambon Pamued Soi 3. (Correction: He was at home, but nothing incriminating was found.)

Pu Nuad was said to have served as a go between after a group of gunmen, believed to be members of Naw Kham’s racket, kidnapped 19 Chinese workers from the casino compound on 4 April.

Three of Naw Kham’s men are also under Thai police custody, after they had sought medical treatment in Thailand in the wake of a shootout with joint Burmese-Lao security forces on 22 September. Burmese authorities have demanded they be extradited to Burmese territory.

Kings Romans in Tonpheung, Bokeo Province, Laos, is owned by Zhao Wei, a native of Helongjiang province, China. He had for a number of years operated the Landong casino in Mongla, in the territory controlled by the ceasefire group National Democratic Alliance Army (NDAA) of Sai Leun aka Lin Mingxian.

As for Naw Kham, he has been successfully evading the clutches of law enforcement officers from Burma, Laos, Thailand and China since he went underground following the raid of his home in Tachilek on 10 January 2006. The raid resulted in the capture of “countless number of methamphetamine tablets, the amount, if sold, could have bought the whole town,” according to local militia sources.

Since then ships plying the Mekong and drug smugglers crisscrossing it have been paying protection to him. “I hope no one catches him,” said a local villager. “He has been really good to us.”

Transport Deportment of  lodged complaint to The Joint Committee on Coordination of Commercial Navigation (JCCN) on 18 May, that Hong Xing, a 300 ton cargo vessel was shot up by gunmen in two speedboats the day before on the Mekong, 7 km north of Chiang Saen. “Fortunately, this caused no injuries and deaths,” it reported. The JCCN was requested to strengthen the management “to avoid future occurrence of such behaviors.” The area is hounded by an armed Shan band led by Naw Kham. (The Manager Online)