GERMAN NEWSPAPER “FOCUS” made an interview with U Wirathu at Mandalay.

We will buy Focus Journal , translate and check questions and answers 🙂

Shame on you Min Aung Hling! Since the beginning, it is wrong to have active-duty soldiers occupied quarter of the seats in the parliament directly appointed by military commander-in-chief. [Burma Democratic Concern (BDC)]

YANGON: Myanmar’s military chief feels his country is not ready for a reduced military role in Parliament. In an exclusive interview with Channel NewsAsia, Commander-in-Chief Min Aung Hlaing said the military needs to be in Parliament because the country is still a young democracy.

The current Constitution mandates a 25 percent military representation in Parliament. Military officers occupy one quarter of the elected seats in Parliament. But under the Constitution, they are appointed and not elected by the people.

Citizens are calling for that clause, known as section 436, to be amended. The military chief however is reluctant to do so at this stage of Myanmar’s transition.

Senior General Min Aung Hlaing said: “It’s been only about four years. We are still a young democracy. When we are moving towards a multi-party democratic system it needs to be a strong system. The military representatives in Parliament only give advice in the legislative process. They can never make decisions.”

“It will depend a lot on the country’s unity, its peace and stability. To specify an exact time is difficult,” he said, referring to the call to amend section 436.

But that uncertainty is making many uneasy. Some feel the 25 percent military representation will hinder Myanmar’s democratization process.

Said political analyst Dr Yan Myo Thein: “Most of the Myanmar people are worried about who will make the decision on the assessment of Myanmar’s maturity on the democratisation process, and when the process will end.

Outside of Parliament, the 59-year-old military chief’s name has been tossed up as a potential presidential candidate, as he nears the retirement age of 60.

Senior General Min Aung Hlaing said: “About becoming President, I will decide, depending on the situation of the times. If I turn my attention to (politics) now, it is likely to weaken the job I’m doing. Right now it is too early to make a decision and talk about it.”

The military chief however did not rule out the possibility of entering the political arena. Recently, Senior General Min Aung Hlaing also started to slowly lift the veil of secrecy often associated with the military, by communicating with the media and acknowledging the need to be more in touch with the people – signs that his contributions may not end with his retirement from the military.

Myanmar authorities said on Tuesday that they would take legal action against a newspaper for an interview describing the words of the president as “absurd and insane”, amid mounting international concern over backtracking on press freedoms.

The Myanmar Herald Journal, renowned for its criticism of the government and ministers in the former junta-run country, was accused of having “tarnished the image and rights” of President Thein Sein, according to a statement from the information ministry published in state-backed media.

The decision to sue the paper, which authorities said followed a process of mediation by the interim press council, comes as media freedoms fall under the spotlight before a visit by US President Barack Obama next week.

His visit is likely to highlight concerns over journalist arrests and the death in army custody of a freelance reporter late last month.

According to the information ministry, the Myanmar Herald Journal ran an interview in which the subject described the president’s words as “gibberish, irrational, cheap and inconsistent… completely nonsensical, absurd and insane”. END_OF_DOCUMENT_TOKEN_TO_BE_REPLACED

Khunying Pornthip  said  : This case lack of reliability from people because there were no simulation and the police didn’t act right according to the forensic process. The forensic process needs 3 sections, 1st section is officers who responsible for questioning,and making report about the case, 2nd section is officers who collect witnesses and evidences,3rd section is the officers who examine witnesses and evidences. So this murder of 2 Britons on Koh Tao needed to have knowledge and used forensic experts only. Meanwhile the officers who came to check the crime scene needed to listen the information from the experts first and the experts would look for the cause of death, how they died because the crime scene might not be in only 1 place. Especially in this case didn’t manage the process instantly so might not had all the subjects matter. As same as the postmortem in this case, only gave DNA test report to the media but the fact need to have results of other examinations together whether blood,alcohol or drug in the dead bodies. And the investigation and probe of the police still used the same old way, that the officers who collected evidences and officers who proved the evidences are up on the enquiry officers only. And enquiry officers compiled all 3 sections together, this is completely a different thinking and method with the forensic. Maybe because the enquiry officer had seen that if they had enough witnesses and evidences then they could just write report and sent to attorney. But for me i think the law still needs to modify especially the case like this one that needs the forensic to lead the way or see to the part that was’t clear to make it clear before writing the report and send to the court.
So in this case, about the first section that i have to say is the enquiry officers needed to have knowledge, the weak point is maybe because they didn’t understand that this case needed to use forensic experts then they didn’t ask forensic experts from Surat Thani to come manage. Then the 2nd section is collected witnesses and evidences, in this case is a murder case that has 2 dead bodies, 100% that you must had forensic experts only. END_OF_DOCUMENT_TOKEN_TO_BE_REPLACED

A 500,000 baht reward has been offered to any police who manage to arrest Wutthipong Kotthammakhun, alias Ko Tee, wanted on lese majeste charges within seven days.
The bounty was offered by Phra Buddha Isara, a leader of the People’s Democratic Reform Committee. He said the bounty offer was intended to give an incentive to the police to arrest the suspect.

The monk today (Friday) filed a complaint with Khu Kot police against Wutthipong accusing him committing lese majeste and sedition.

He said that he would travel to the other police stations to file complaints against Ko Tee.

The Criminal Court is expected to issue a warrant for the arrest of Ko Tee wanted by police on lese majeste charges.

A police lieutenant general has been shielding Ko Tee from arrest, Democrat party’s chief legal team claimed Thursday.
Without naming name, Mr Wirat Kalayasiri said the police lieutenant general was not far away from where he was speaking and he was willing to give police the tip of where Ko Tee, or Wutthipong Kotthammakhun, had been hiding if the police had no idea where to look for him.

The Democrat suggested the national police chief, Pol Gen Adul Saengsingkaew, to take the police officer in question to task for protecting a criminal offender.

The Democrats on Thursday lodged a complaint with the Crime Suppression Division to arrest Ko Tee for allegedly defaming the Monarchy during his interview with a foreign media.

CAPO and Police should seeks legal action against him !!!! 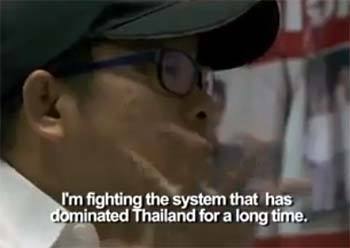 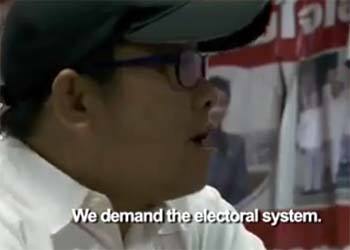 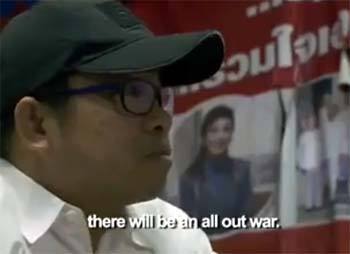 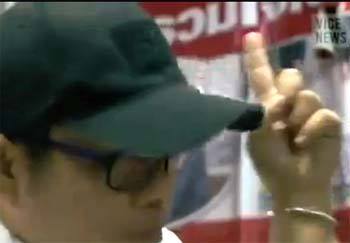 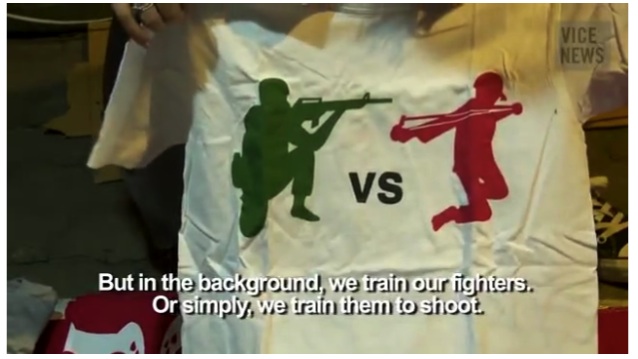 10 April 2014 (NNT) – The Center for the Administration of Peace and Order (CAPO) is seeking an arrest warrant for Pathum Thani based pro-government leader Wuthipong Kachathamkul, also known as Ko Tee, over an alleged lese-majeste offence.

The CAPO said Ko Tee’s recent interview with a foreign journalist potentially violated Section 112 of the Criminal Code. An official probe into the offense is underway while an arrest warrant is expected to be secured on Friday.

A video clip was circulated online showing the interview in which Mr. Wuthipong made the offensive remark about the monarchy.

The CAPO warned members of the public not to share the video online, as the move is considered illegal under the Computer Crimes Act. Violators can face up to 15 years in prison.

this picture shows,(OFFICIAL PAGE )  why they cannot find KO TEE ….. 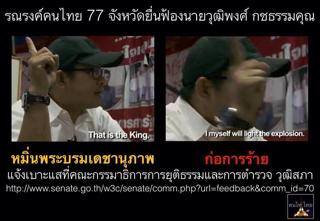 Letter stamped “Extremely Urgent,” signed by the PM’s secretary Suranand Vejjajiva appeared on Thursday afternoon. The letter urges the police to speed up the lèse majesté case against Kotee. 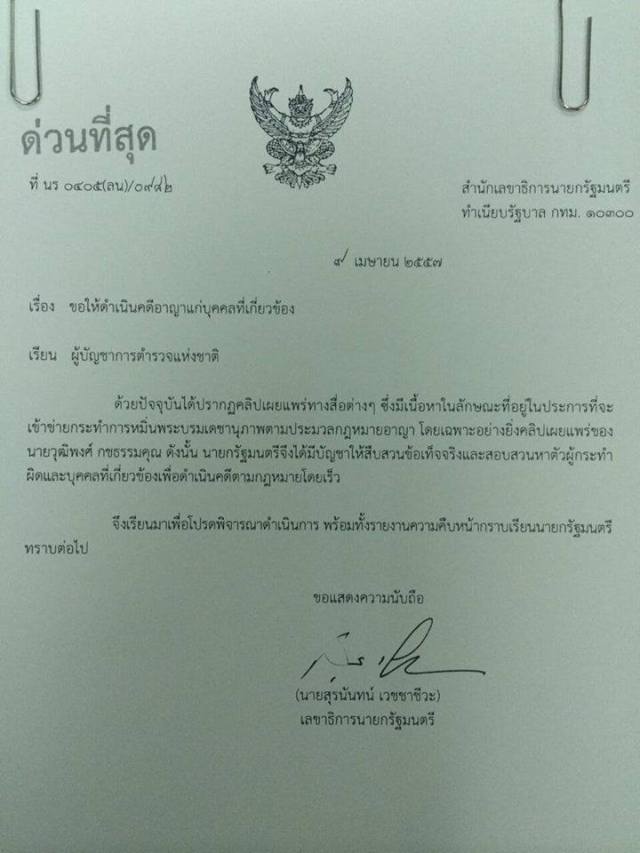 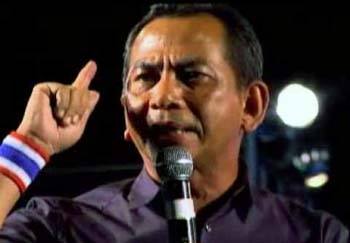 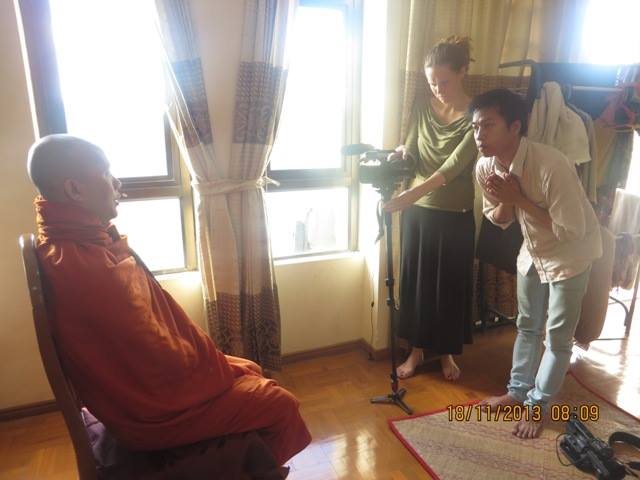 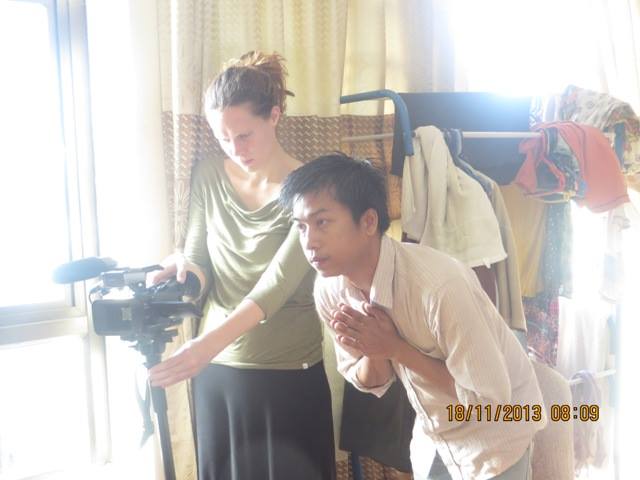