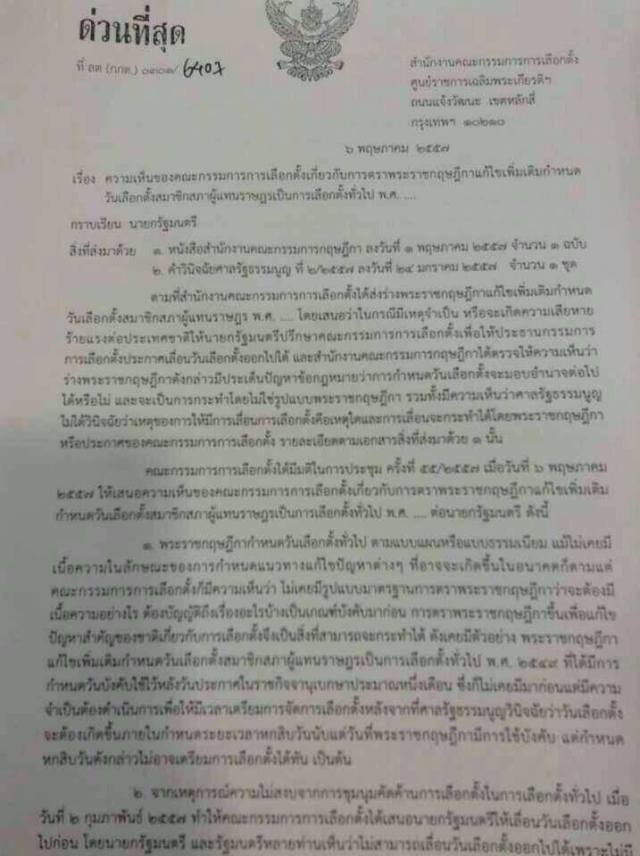 24.12.
Hundreds of protesters led by the People’s Democratic Reform Committee (PDRC) continued encirclement of the Bangkok Youth Center (Thai-Japan) where the Election Commission is using as an official venue to register party-list candidates for the February 2 election.

All the center’s seven entrances and exits were blocked by protesters. Entries are banned.

The encirclement of the center was the second day with the situation remaining peaceful this morning.

However at about 7.30 a.m. today, officials of the EC tried to convince protesters to allow them entry to work but were rejected.

The 1982 Citizenship Law was not subjected to any amendment, said Minister for Immigration and Population Khin Yi.
“We have never said that the 1982 Citizenship Law will be amended. Our department has not officially spoken about it. However, I kept hearing this issue when I came back from my trip,” said Khin Yi.
“As I have said several times before, [the Citizenship Law] was drafted for six and a half years with public desire after meeting with the people in regions and states during the administration of the Revolutionary Council,” he said.
During the administration of the current government, a proposal was submitted to the Parliament to abolish this Law, which caused a debate among eight MPs.
The ministry decided that this Law was drafted after taking time and it is effective for the security and benefit of the country.
“So, we will continue to use this Law as it is now. We have official records of this. So, we are not going to amend this Law now and we have never said we will amend it. It was just a misunderstanding,” he said.
Khin Yi also said there are 1.33 million Bengali Muslims living in Myanmar according to the current statistics and most of them (1.08 million) are in Rakhine State, responding to a question raised by a reporter about the Bengali population at the conference.
“On Oct 1st every year, the government used to release the current population statistics of the country. According to 2012 Statistics, Myanmar’s population was 60.98 million. The currently compiled statistics show 1.33 million Bengali Muslims are living in the country. Rakhine alone has 1.08 million of them,” he added

.
Every Bengalis living in Rakhine will get certain official registration cards if they meet criteria listed in 1982 Citizenship Law, he said.
It’s up to the election commission to decide on whether the Bengalis holding the cards have the right to vote in the coming election or not, he added.
Analysts say that the number of Muslims living in Myanmar may be more than 4% of the country’s population previously released by the government as to the current official statistics of Bengali Muslims.

TRICKY KIN YI NOW THE BALL IS ON ELECTION COMMISSION

With what decree and limitations did the ministry issue the White Cards, through which votes could be cast in elections according to Section 6 of Lowe House Election Law passed in March, 2010?

As the guest citizens and those holding White Cards had the equal voting of right of a national citizen, millions of eligible voters lost their voting right at that time. If that law continues to exist till 2015, the 1982 citizenship law will be nothing more than a torn paper.

How will the ministry mainly responsible for the issuance of the White Cards address the issue of Rohingya or Bengali?

For Immigration and Population Minister Khin Yi, who was the second most responsible official in the Home Affairs Ministry, does he have plans to legalize the White Cards or give the voting right to the Bengalis or regard them as citizens? This question is more important than whether the 1982 citizenship law will be amended or not.
Were there any corruption cases in issuing the White Cards?
With what criteria did the ministry issue over 500,000 White Cards (temporary national registration cards) for Bengalis in 2010? Was there any assessment over the citizenship rights in line with 1982 Myanmar citizenship law?
—Impact of White Cards holders on Election

In accordance with the international standards, anyone who hasn’t got the citizenship cannot vote. The white card is the temporary registration card and it means there are people who are living in Burma, but their status of citizenship are still not decided yet.

According to the mechanism of UK government census collection system, British government collect all the data of people living in UK, but they give only British citizens rights to vote but not to guests.

Aye Thar Aung, chairman of the Arkan League for Democracy, said temporary card holders should be denied citizenship and voting rights according to the 1982 Citizenship Law and the 2008 Constitution.

“A complaint letter will be submitted to the election commission based on the 1982 Citizenship Law to prevent these card holders from voting in the 2015 Election,” said Aye Thar Aung.

Dr Aye Maung, chairman of Rakhine Nationalities Development Party, said the temporary identity cards were not included in the 1982 Citizenship Law and the authorities should investigate the rights given to temporary card holders.

“When citizen rights have been given to unworthy people, we need to review whether this seems to harm ‘Perpetuation of Sovereignty’ [one of the three Main National Causes outlined by the military government after 1988].” END_OF_DOCUMENT_TOKEN_TO_BE_REPLACED

Naypyidaw: The Election Commission has summoned two major political parties in Arakan State, the Rakhine Nationalities Development Party and the Arakan League for Democracy, to a meeting over the recent renewed violence in the region, said the leaders of the parties.

U Phe Than, a lawmaker of people’s parliament of the RNDP from Mraybon Township, told Narinjara that a statement from the presidential office was read out and their parties were told to cooperate with the government in order to restore peace and order in Arakan State in the meeting.

“ Commission member U Myint Hlaing along with four other members read a statement issued by the Presidential office to us. They told us not to get involves in the current conflicts and to cooperate with the government in lessening the problems, suggesting that we, the political parties, as well as the commission itself have responsibilities to do so”, said U Phe Than.

U Myo Kyaw, the secretary of the ALD, said the election commission also warned in the meeting that any party or individual involved in renewed communal violence would have action taken against them.

“We, the ALD and the RNDP were summoned and told by the commission not to get involved in the current conflicts and that any party or individual would have action taken against them according to the rules and regulations of the commission if they were found involved in the renewed violence”, said U Myo Kyaw.

President U Kyaw Myint, Secretary U Myo Kyaw and Central executive member U Myo Swe from the ALD, and President Dr. Aye Maung, U Ba Shein and U Phe Than from the RNDP are said to have attended the meeting summoned by the election commission. END_OF_DOCUMENT_TOKEN_TO_BE_REPLACED

Ko Ko Zaw, a senior member of Suu Kyi’s National League for Democracy (NLD), told The Irrawaddy from his Moulmein party office that, “[The Election Commission] told us that the garden would be damaged. This is why they did not give permission.”

“We have the right to use it according to the law,” he added.

The Election Commission has instead allowed the event to take place in a football field six miles (10 km) outside the city which critics claim will make it harder for local people to hear Suu Kyi speak.

“It is far for the people to go there. They need to take motorbikes,” said Ko Ko Zaw.

NLD sources claim the party asked twice to use Than Lwin Garden for their campaign, and complained that the replacement football field is only a third of the size.

However, the NLD claims that some government departments continue to block the party’s campaign activities despite being approved by the Union Election Commission.

Similar problems have marred Suu Kyi’s campaign all around Burma, with planned speeches in Naypyidaw and Mandalay townships having to be hastily rearranged after access to venues was refused.

Suu Kyi also complained during a rally in Taungoo Township on Tuesday that NLD billboards were being defaced.

Suu Kyi will arrive in Moulmein on Saturday afternoon and will spend one night in the city before giving a speech on Sunday morning, according to Khun Thar Myint, who is responsible for security during her visit.

The 66-year-old Nobel Laureate also plans to meet some members of Mon and other political parties during a dinner at the Strand Hotel.

Mon State has only one parliamentary seat to contest at the upcoming by-elections scheduled for April 1. There are four candidates from different political parties—Khin Htay Kywe from the NLD, Myit Myit Wai from the All Mon Regions Democracy Party, Aung Than Oo from the National Unity Party and Aye Myit from the Union Solidarity and Development Party.

The NLD boycotted the 2010 general election in protest at the 2008 Constitution which guaranteed a large proportion of parliamentary seats for the military. But it agreed to rejoin electoral politics last year when the new military-backed elected president, Thein Sein, began implementing democratic reforms. irrawaddy news

Chiang Mai (Mizzima) – The Burmese Election Commission has threatened the politician-activist Bauk Ja that her political party could be dissolved because of her advocacy for 19 Kachin students living in Rangoon who were ordered by the authorities to return home, according to the National Democratic Force (NDF).