ANOTHER EXPERT : อ่านบทวิเคราะห์ของบีบีซี จอห์นาธาน เฮด ว่าแฝงประเด็นอะไรกันค่ะ Analysis: Jonathan Head, BBC News, Bangkok The vote in that ushered in Thailand’s 29th Prime Minister was the kind of rushed acclamation favoured by dictatorships and communist parties of old. In just 15 minutes, 191 out of 194 assembly members approved General Prayuth Chan-ocha, who was the only candidate.

As some pointed out before the vote, the general now exercises such complete grip on power there was not much point in considering anyone else. Fittingly, Gen Prayuth was not in parliament for the vote – instead he was attending a ceremony at his old regiment, whose alumni form the core of the coup-makers.

His next task is to appoint a 35-member cabinet, and to oversee the establishment of a 250-member reform council, which is supposed to carry out a root-and-branch reform of politics and government. It is a hugely ambitious agenda.

How successful Gen Prayuth is will depend on how skilfully he uses the formidable hand he now holds. Critics say he is abrupt and impatient, with deeply conservative outlook. His fans describe him as decisive, and a good listener.

Given the way the military has smothered dissent since the coup, there has been little visible opposition so far. That may change as they tackle more difficult issues.

Although his role is meant to be an interim one as the military plans to hold a general election in late 2015, our correspondent says Gen Prayuth now wields enormous power- he also still heads the military junta.

He is expected to pick his new cabinet soon.

He has promised a root and branch reform of politics to prevent a return to the turmoil of recent years, offering a possible restoration of democratic rule next year. 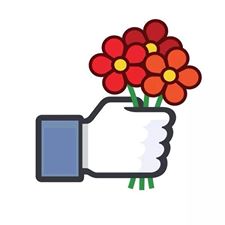 Bodhgaya is home to at least 46 Buddhist monasteries from Japan, Sri Lanka, Thailand, China, Mayanmar etc. Monks of these monasteries and the devotees visit the Mahabodhi Mahavihara before dawn and in evening to offer prayer.

Today was no different.
And it will be no different.. the chants for Buddha, Dhamma and Sangha will be louder than a thousands bombs. 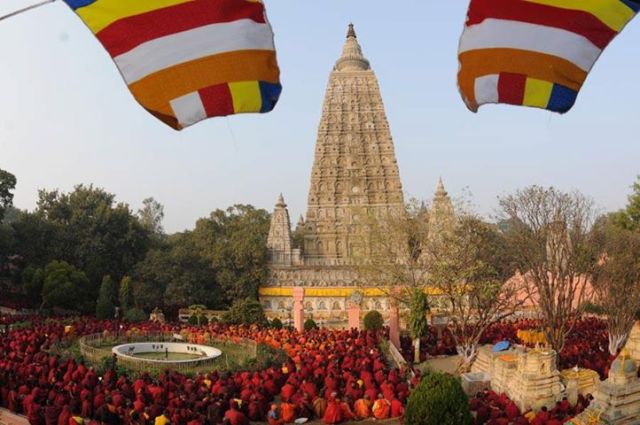 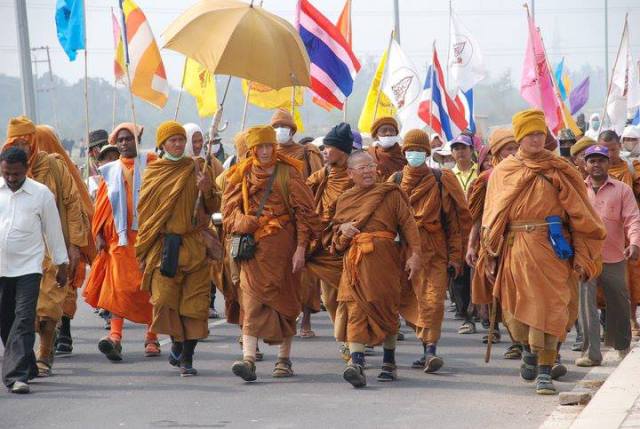 There is a crisis evolving in Myanmar and the Buddhist nations of the world can no longer remain idle and indifferent but must now stand in solidarity with a nation facing the wrath of foreign elements out to destabilize it. We cannot trust the biased and distorted versions that come from mainstream international news agencies which are funded to write according to what suits Western agendas. On the one hand Myanmar is being targeted as a gateway to eventually attack China while Wahhabi incursions using Rohingyas are arming jihadists to create further chaos. In the past Myanmar came to the aid of Sri Lanka on many an occasion at times of need and it is the duty and moral obligation of Sri Lanka to reciprocate and now send a fact finding mission comprising both lay and Buddhist monks to Myanmar. 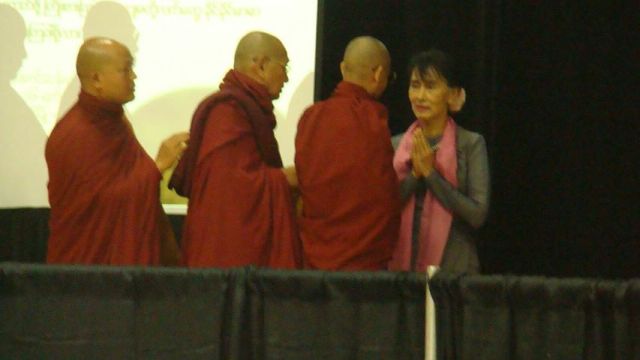 With gratitude to Dr. Hema Goonetilake whose comprehensive compilation of the Sri Lanka-Burma ties enables us to know more of the bond that the two nations share. It was in 1069 that help was sought by King Vijayabahu 1 and King Anawrahta ( Anuruddha) sent ships of supplies in aid of Buddhist Ceylon from Myanmar to defeat the Chola invaders and thereafter King Vijayabahu’s request for scriptures and monks in 1071 resulted in 20 Burmese monks re-ordaining the entire clergy of Sri Lanka. King Vijayabahu’s gift was a replica of the Buddha Tooth which remains enshrined in the Lawkananda Pagoda in Pagan. This is recorded in the Chulavamsa. It is also to be noted that the Burmese chronicles such as Mahasammatavamsa, Rajavamsa and Sasanavamsa were directly modelled after the Mahavamsa.

Many may not be aware too that the King of Burma (contemporary with Parakramabahu 1 – 1153-1186) married a daughter of a Sinhalese King and even appointed an ambassador to Sri Lanka.

Even when relationships between the two nations had strained due to trade the Sinhala Bhikkhus had come forward to restore the relations which depicts the bond that exists on a religious dimension that supersedes that of politics.

The controversial Arakan (Rakhine) area was described in 1433 as the Golden Age of Arakan Theravada Buddhism with the Tripitaka brought from Sri Lanka placed near the image of Mahamuni. Even Portuguese historian Queroz mentions a major Buddhist temple destroyed in 1620 in Trincomalee which had been headed by a Buddhist monk from Arakan indicating that Burmese monks were in Sri Lanka managing temples and the ties that existed.

It was following the arrival of the colonials and their brutal conversions to Christianity that affected Buddhism leaving King Vimaladharmasuriya 1 (1592-1604) to again seek the assistance of Myanmar to send a mission from Arakan to confer upasampada on Sinhala Samaneras.

The ties between Sri Lanka Myanmar are solid. Both nations practice Theravada Buddhism as does Thailand whose Prime Minister presently in Sri Lanka declared to the Sri Lankan Parliament the need to tie Buddhism further. From Thailand we have received the upasampada to establish the Siam Nikaya in 1753 with the Asgiriya and Malwatte Chapters while from Myanmar we have the Amarapura and Ramanna Nikayas – all denoting a very powerful bloc.Together with China’s 1,070,893,447 Buddhist population it is now desirable to create the League of Buddhist Nations under the leadership and patronage of China.

It is evident that the ties that bind Sri Lanka and Myanmar go beyond a 1000 years. With the rise of Asia, the intrusions by forces seeking to destabilize and balkanize Asian nations warrants the Buddhist world to unite and build a force to respond to the threats that arise in both covert and overt forms.

As Myanmar faces a plethora of obstacles it is up to the Buddhists of Sri Lanka to remember the assistance given to Sri Lanka in the past when we were in dire strait following Chola invasions and on several occasions thereafter and we need to now show our gratitude and render assistance to our good friends in Myanmar.

As an initial step the best possible way is to first send a fact finding mission to Myanmar comprising Buddhist laymen and monks so that their findings  can quell the lies and fabrications that are being spread by the international news agencies and their local agents that are paid to do so.

Above all else, the Buddhist nations in Asia need to come together to create a formidable force with international clout  i.e. League of Buddhist Nations, similar to OIC (Organisation of Islamic Co-operation ) and EU (European Union) and usher in a new phase in international relations by spreading the Buddha’s message of peace and harmony  and compassion to all living beings (Ahimsa and Non – Violence) that had enormous influence in this part of the world  for over two millennia before it got diluted and suppressed by the destructive tendencies of the colonial west that invaded Asia, Africa and several other parts of the world 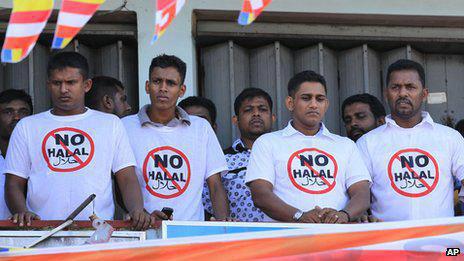 The international community is also concerned about the growing presence of parties espousing radical Islam in the Sunni-dominated country. The island nation is known for its liberal traditions, but there is also an ongoing attempt to radicalize Maldivian society. 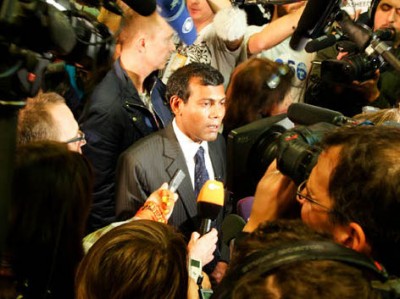 In the Maldives, the old authoritarian style of leadership and the politics of vendetta threaten to reverse the country’s hard-won democratic advances.

In a dramatic development, Mohamed Nasheed, who until last year was the democratically elected president of the island nation, took political refuge in the Indian Embassy in Male on Tuesday, after a court in the Maldives issued a warrant for his arrest.

The warrant was issued after Nasheed failed to appear at a hearing related to charges that he had illegally ordered the detention of chief justice Abdulla Mohamed in December 2011.
The arrest order sparked a controversy that led to Nasheed’s ouster in what the former president called a coup.

The warrant for Nasheed’s arrest has expired and the Maldives government has declared him a free man. However, the former president is unwilling to leave the embassy compound until authorities assure him that he will not be arrested and will be permitted to campaign in the presidential elections scheduled for September 7.

Nasheed’s refuge in the Indian embassy has dragged New Delhi into the Maldives’ domestic political turmoil. So far India has operated on Nasheed’s behalf, without interfering in the internal tug of war. Nonetheless, a section of the ruling elite in Male has accused New Delhi of meddling in the country’s domestic issues.

Last year, he was ousted as president and replaced by his former deputy Mohamed Waheed Hassan Manik, Nasheed accused India of siding with anti-democratic forces in the country.

Now it’s the other way around. According to news reports, the Maldivian government has asked India to respect its judicial independence and election commission.

The Maldives’ big neighbor, however, is openly siding with Nasheed, the first-ever democratically elected president on the archipelago. A statement made by India’s Ministry of External Affairs “called upon the Government and all political parties to adhere strictly to democratic principles and the rule of law, thereby paving the way for free, fair, credible and inclusive elections.”

On Thursday Indian External Affairs Minister Salman Khurshid spoke via telephone with his Maldivian counterpart Abdul Samad Abdulla, but no concrete proposal has emerged to end the impasse.

These circumstances raise a few important questions. Why has India decided to back Nasheed now, after allegedly playing an active role in Waheed’s ascension to power last year? Further, what does the arrest of the former president mean for the democratic evolution of the predominantly Muslim Maldives? END_OF_DOCUMENT_TOKEN_TO_BE_REPLACED