5.11.2014 The Neighboring Countries Economic Development Cooperation Agency (NEDA) has offered to implement, facilitate, and finance the road development project in Three Pagoda Pass (TPP) Town, on the Thai-Burma border, according to NEDA Senior Vice-President Mr. Teerasak Monkolpod.
NEDA has offered to take responsibility for the road development project, providing 350 million baht for the construction of a 21.7 kilometer highway, as well as a bridge across the Maekasa River, near Chaungzone Village; the highway will begin at the Thai-Burma border checkpoint in Three Pagoda Pass Town. 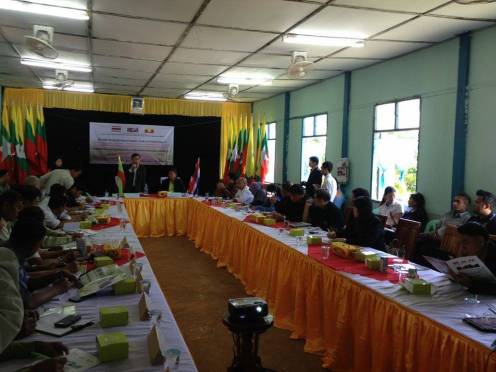 The development project will include water channels, sidewalks, and electricity poles built and set up along the highway.

“To implement this road project, we will submit [for approval from] the Ministry of Construction. We have to wait for our [Burmese] government’s permission,” explained U Win Lwin, Vice-Chief Engineer of the Public Construction Project.

NEDA plans to construct the highway beginning from the checkpoint located at the Thai-Burma border, passing from Taw-na road to the Maekasa highway, through Thaung-wyne to Ywa-thit.

NEDA has also committed to providing 220 million baht for the construction of a motor-way entrance in Three Pagoda Pass.

“After this road project, the second project plan is to build a motor-way entrance near Taung-wyne, and they [NEDA] will also build a border checkpoint and office buildings,” said an official from Three Pagoda Pass, who asked to remain anonymous.