Pro-Islamic, Muslims apologist and anti-Myanmar Maung Zarni is insulting Sitagu Sayadaw because the venerable has said that most religions are based on Fear and people are manipulated by aggressive religions. Sayadaw is just advocating for peace.

This is just truth-hurt phenomenon to Maung Zarni. 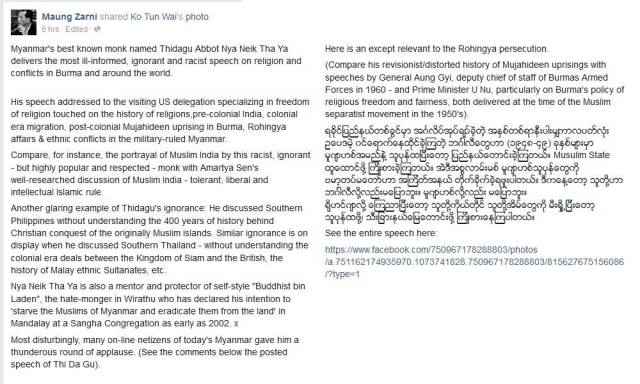 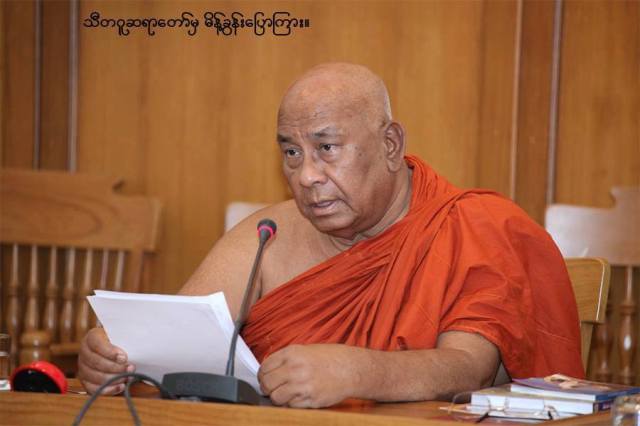 Many organizations from abroad came to Myanmar with the intention of solving such problems. But, instead of solving it, we found that they sometimes made the situation worse and worse. Therefore I would like to request you to find a better solution for such problems.
The next one, what I would like to say is that the Myanmar government is now trying to establish internal peace and stability with the intention of ceasing civil war and communal violence. At this crucial Juncture, some religious extremists are frustrating with provocative statements and actions. I would like to request you to give your hands in the process of solving problems and conflicts. A methodical approach is essential for the peace process. It is also necessary not to make things from bad to worse and more complicated.
As devout Buddhists, we also promise that we are going to solve these problems without violence and we will do it firmly standing on the teaching of the Buddha, that is tolerance, forgiveness, serving society, sacrifice for others and rationality.
Thank you all.
May you be happy and healthy.
Dr. Ashin Nyanissara (Ph.D, D.Litt)
Sitagu International Buddhist IBot Academy
by Venerable Ashin Nyanissara (Sitagu/Thegon Sayadaw)
by Venerable Ashin Nyanissara (Sitagu/Thegon Sayadaw)