For people with casual acquaintance with Gen Prayuth Chan-ocha, Thailand’s 29th prime minister, he seems to be a stern person.
But friends close to him said in fact Gen Prayuth is not so. He is a kind and gentle person.

Though at the outset the general’s character seems to be tough, stern and outspoken.

However those close to him have stated that he is in fact a kind person who is gentle, diligent and an avid reader.

He loves keeping up with the latest news, loves movies, reads papers, magazines and even pocket books.

Most importantly he is known to be a quick thinker, is a man of action and caring.

He is concerned for everyone around him. 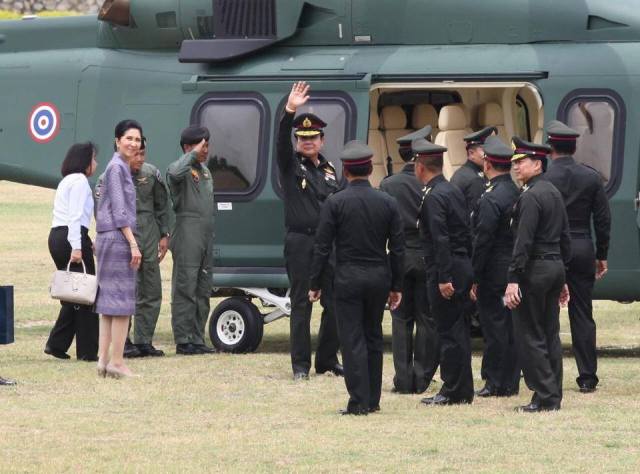 He achieved a Bachelor of Science in Chula Chomklao Royal Military Academy. After graduating from the academy, Gen. Prayuth served in the 21st Infantry Regiment (Queen’s Guards).

Gen. Prayuth was the Chief of Staff for the Royal Thai Army from 2008 to 2009. In 2009, was appointed honorary adjutant of the king. In 2010, he succeeded Anupong Paochinda as Commander in Chief of the army. END_OF_DOCUMENT_TOKEN_TO_BE_REPLACED

22.8.2014 The financial investigation unit of the National Police Force is investigating sales of shares in Asia Green Development (AGD) to Aye Ne Win for possible connections to money laundering, Colonel Kyaw Win Thein, deputy commander of the unit said on August 21.
Five other cases are being investigated for possible laundering of drug-trade money through real estate transactions, he told a meeting on the new Anti-Money Laundering Law held at the office of the Myanmar Banks Association.
The investigations have yet to advance to the stage of interrogations, he said. “We are investigating and we have not finished that stage yet. We can’t make what we know public at this time, but we have submitted reports to officials,” he told the bankers.
Kyaw Win Thein said the investigation into Aye Ne Win’s share purchase began before reports appeared about the shocking transactions in journals and newspapers. Police cannot say more publicly due to their code of conduct which mandates respect for privacy and the rights of those under investigation, the colonel said.
The five cases of alleged laundering of funds earned from the narcotic trade through real- estate transactions could be the tip of the iceberg, analysts have said, point to the swift fluctuations in prices of real estate in the country over the past few years as a possible option for laundering money earned from criminal activity.
In Myanmar, people commonly refer to “black” and “white” money to distinguish between funds gained from criminal activities and those gained from legitimate business.
Under the new law to combat money laundering, authorities are closely monitoring those whose monthly savings income exceeds Ks 100 million (about US$100,000). Police estimate that there are about 1,000 people above that threshold, but stress that they have no evidence that these funds are being laundered through banks, Kyaw Win Thein said.
Although the Anti-Money Laundering Law was enacted early this year – it replaced the 2002 Control of Money Laundering Law – the by-laws of the new law have yet to be enacted.
Kyaw Win Thein said it was not necessary to wait for the by-law to begin investigations and take action against suspects.
Aye Ne Win said in July that he had bought 15 per cent of AGD’s shares and had entered into an agreement to purchase another 60 per cent, with a further plan to raise his stake in the bank to 85 per cent within six months. The comments were made in an interview in the July 20 issues of The Messenger, a weekly journal.
Aye Ne Win is the grandson of former dictator General Ne Win, raising questions about where Aye Ne Win obtained money for his share purchase.
The Central Bank of Myanmar scrutinises share purchases and it will take at least one and a half months for the process to be complete, Aye Ne Win said, adding that the 85 per cent target was a plan.
AGD is owned by crony Tay Za. He said he will reconsider the share sale, but Aye Ne Win said the agreement had already been made. CR. ELEVEN MEDIA 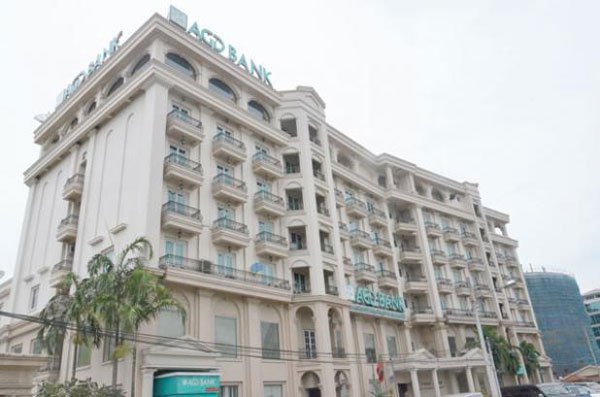 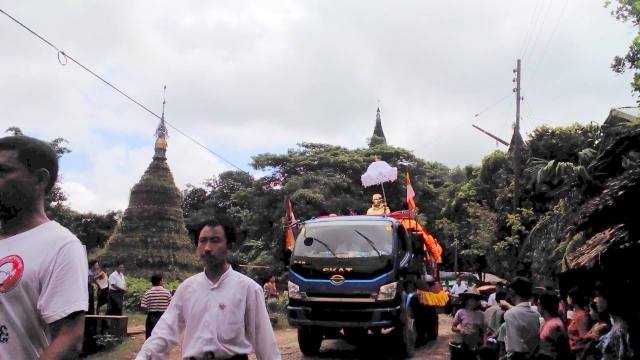 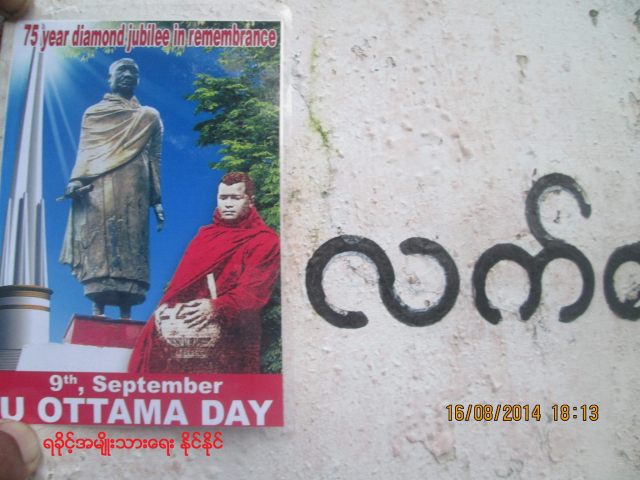 Good morning Honorable gentlemen
Welcome to Sitagu International Buddhist Academy. I am glad to meet and to discuss with you.
There are six major Religions in the world today. Since Human beings came on Earth, people worshipped the Sun, the Moon and various deities. They also sought refuge in them on the basis of fear. It was called a primitive religion. Most of scholars stated that horror initiated the religions of those days. The Buddha also clearly said that the idea and concept of religions originated from fear. Therefore every religion has full responsibility for the removal of fear which is sticking on the mind of people. But, on the contrary, it is regrettable that a fearful religion and its followers emerged in the world.
After the primitive religions there appeared Hinduism. And afterwards, Jainism also came out on the Land where Hinduism was being flourished. Forty years after the emergence of Jainism, there appeared Buddhism also. Buddhism appeared on the birth place of Hinduism and Jainism and peacefully coexisted with them for ages. There was no traceable history of bloodshed and conflict among them. Also there was no violence and quarrel even on the statement issued by the Hindus saying that the Buddha was an incarnation of God Vishnu. We had only oral and written arguments.
Six hundred years after the Buddha, Jesus Christ appeared in the World. In the ten commandments of Christianity we find many similarities with Buddhism in the field of Morality and Noble practice. Christian missions tried to flourish their faith when they came to the East Asian countries such as India, Sri Lanka, Myanmar, Thailand, Korea and Japan. The people of those countries were non-Christians. But, even after the arrival of Christianity also there was peaceful coexistence between Christians and non-Christians. No history of conflict can be traced to any side. Because all the Hindus, Janis and Christians are walking together on the common platform of their respective teachings, that is Morality, Loving-kindness and compassion. The religion, founded based on Loving-kindness and compassion, has no conflict and it does only social welfare services like Health, Education and other social infrastructures.
In Myanmar, many Christians converted to Buddhism in the past as well as at the present. They did it not because they were forced by the Buddhists. Similarly, many of Buddhists also converted to Christian faith. No single Christian threatened them to do so. They did it of their own free will. Every religion has and should have freedom of worship and freedom of belief. Look at the Crusade that prolonged about forty years. It was recorded in the history of the world.
We have to note that the beginning of conflict is aggressiveness and extremism either in the field of religion or that of politics. Today, in Iraq, the Islamic extremists are forcing ancient Zoroastrians to change their faith into Islam. They even threatened them to kill if their demand is not met. In Africa, a Muslim woman was given the death sentence just because she has converted to Christianity. Therefore, we, the East Asian Buddhist countries are living in constant daily fear of falling under the sword of the Islamic extremists. As we are lacking power and influence, we cannot compete against with the rapid growth of Islamic world.
There was a recorded history that in the thirteenth century A.D, a Muslim army marched from Turkey through India and destroyed Pala Buddhist dynasty and converted it into Islamic state. Pala Buddhist dynasty was none other than present Bangladesh. In the south of Philippine, the Islamic extremists revolted against the government for twenty years. Today, they established a Muslim state there. The Islamic extremists are holding weapons in the south of Thailand to make it a separate Muslim state.
Every religion, according to me, should perform its activities only for the good and welfare of the people. But, today, Islamic extremists are trying to establish Islamic states by waging war against non-Muslims. It is regrettable that they are performing the holy war (Jihad) on the name of God.
Myanmar regained its independence from British in 1948. They colonized Myanmar for nearly hundred years. Many Africans were imported as slaves when the United States of America was established. In the same way, the English rulers illegally imported labourers from India and Bangladesh to Myanmar for the hard labour during their rule.
There is also another bad consequence caused by English colonial rule. During hundred years of British rule, Burmese nationals were not formed as an army. But it was ridiculous that the English rulers administered Myanmar forming different groups of indigenous minorities as an army. When the British rulers went back to England, the minority groups revolted against the Burmese government. We cannot solve those problems until today. These are the natural sufferings faced by the colonial countries. END_OF_DOCUMENT_TOKEN_TO_BE_REPLACED

Khao Laem ya National Park @ RayongStrange  .phenomenon occurs (every year) There are a lot of colorful cups jellyfish .. Jetty area. Khao Laem ya National Park in the Gulf of Thailand//Department of marine and coastal resources. .., with this year’s performance, there are many colorful jellyfish Khao Laem ya. Especially in the morning and evening Time wave.Cr. Department of marine and coastal resources 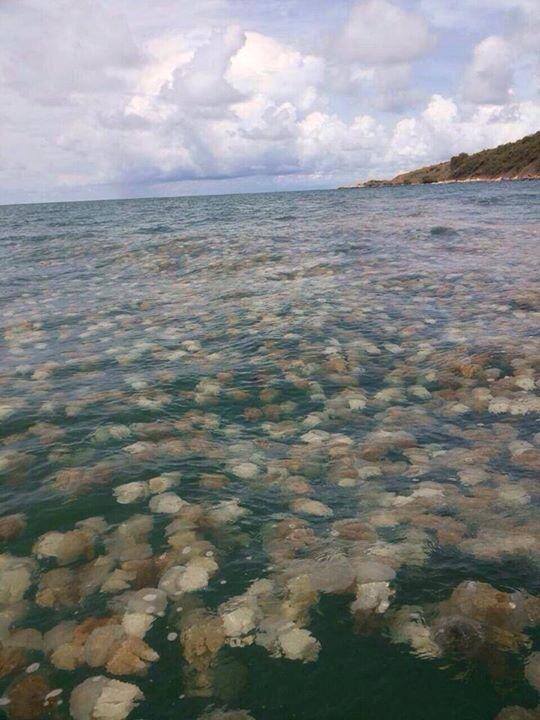 One soldier was killed and give others were wounded when heavily armed Muslim insurgents ambushed their pickup truck on Highway 410 in Banang Satar district of Yala province today.
Three other soldiers suffered injuries after the hospital ambulance crashed with another vehicle while was rushing to Yala hospital.

Police said a group of nine soldiers were returning to their base in Banang Satar district after their routine patrol on Highway 410 when they were ambushed by unknown number of insurgents hiding by roadside bushes.

Six soldiers were injured, one DIED
After a brief exchange of fires, the insurgents fled the scene when nearby troops rushed in to help.

A hospital ambulance arrived and rushed all the six injured to Yala hospital with three other soldiers accompanying.

But the ambulance crashed with another vehicle on the way , causing injuries to three accompanying soldiers.

One soldier injured from the ambush died later in hospital. He was identified as Sgt NimitbTham-akat.

Troops are still hunting the fleeing insurgents into the jungles, police said. 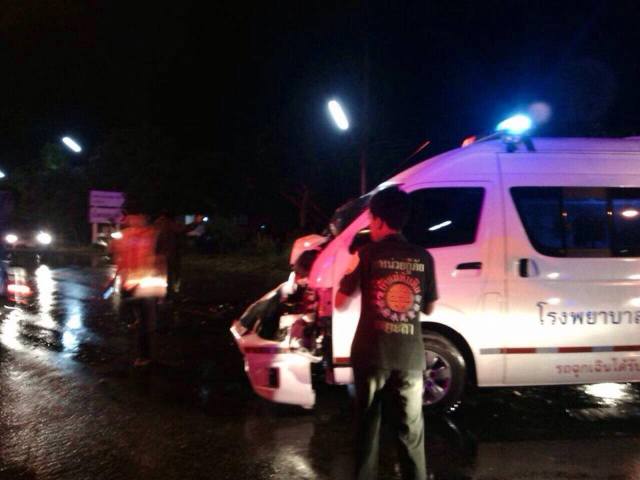 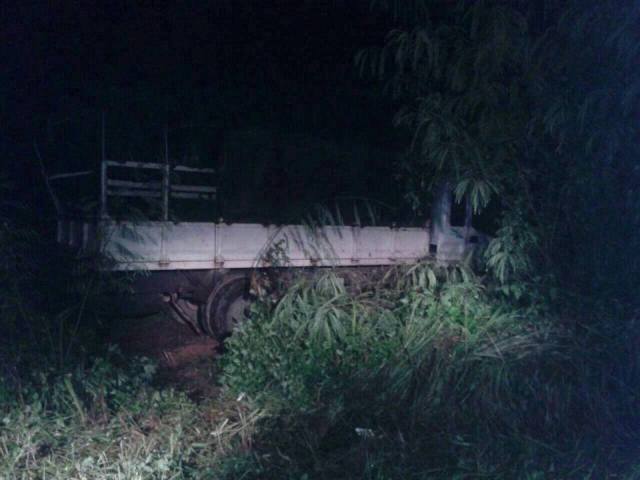 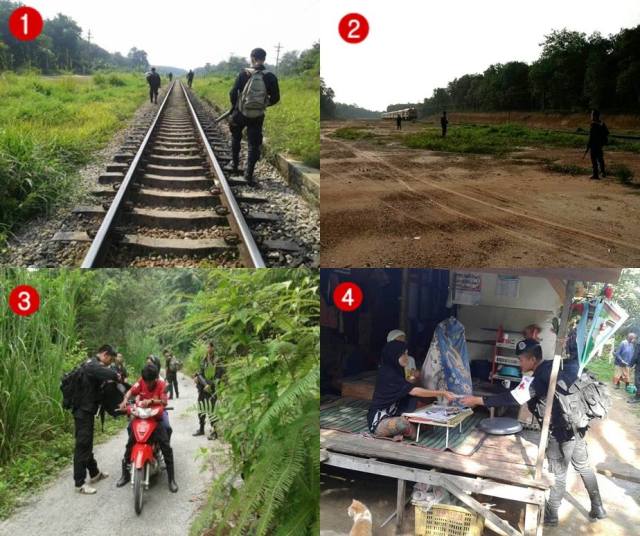