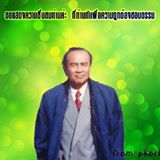 26.5.2014 One para-military ranger was shot dead and two men suspected to be involved in the bomb and gun attack of the People’s Democratic Reform Committee’s protest stage in Trat province on February 22 were arrested by a marine unit on Monday.

Acting on a tip-off that three men suspected to be involved in the February 22 grenade and gun attack at PDRC supporters in Khao Saming district which left two children dead and about 20 others injured had been hiding in a house in a fruit orchard in Khao Saming district, a marine unit of the Chanthaburi-Trat task force led by Rear Admiral Nopporn Wutthironnarit was dispatched to the scene to make arrest.

Two men were arrested in the surprise raid but the third escaped prompting some members of the raiding unit to give chase deep into the orchard. The suspect fired one shot from a shotgun killing a para-military ranger.

No details or even the identities of the two arrested suspects were made public by the marines for fear that they might be killed to prevent them from making confession which might lead to the mastermind who ordered the attack of the PDRC protesters.

Meanwhile, Pol Gen Aek Angsananont, the deputy police chief, disclosed that the M3 submachine gun seized from Samut Sakhon’s Krathumban district earlier this month was used in the PDRC protesters’ attack in Khao Saming as the bullets collected from the scene of the attack matched with those fired from the gun in laboratorial tests.

He insisted that the perpetrators were not military personnel. 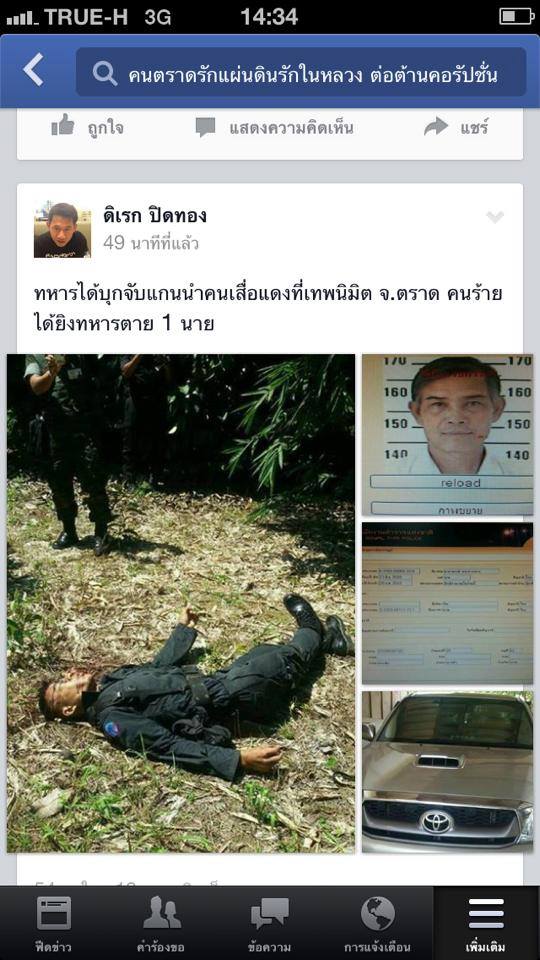 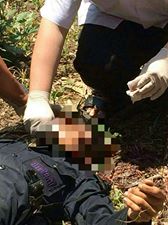 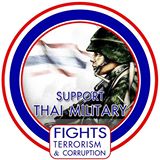 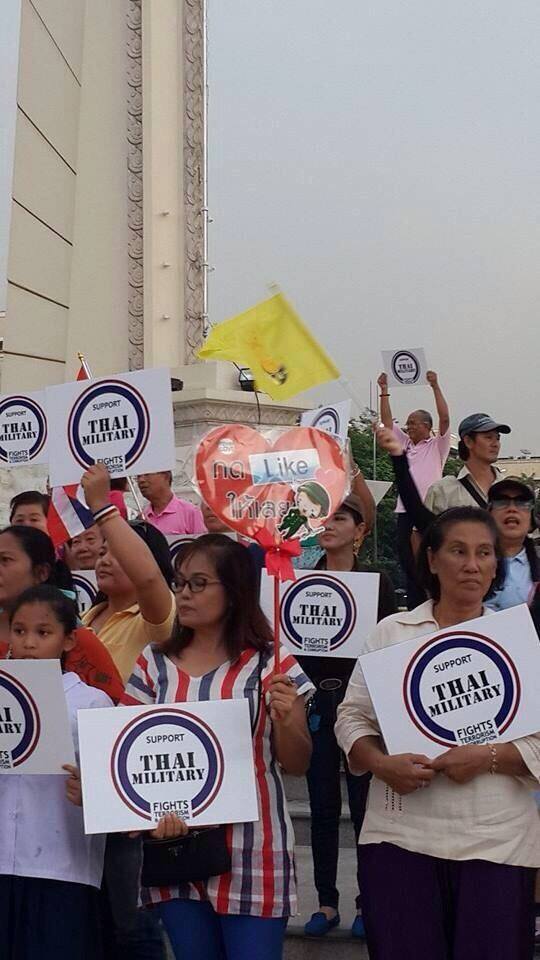 Robert Amsterdam, legal counsel to former prime minister Thaksin Shinawatra (Yingluck’s influential brother), and the United National Front for Democracy Against Dictatorship (UDD), better known as the “red shirts”, said in a statement on Friday that “a number of foreign governments have already expressed their willingness to host such a government in exile under internationally established rules and practice”.

Given its geographical proximity and historic ties to the Shinawatra clan, Cambodia was immediately floated by foreign media outlets as an ideal location. Phnom Penh is little more than an hour by plane from Bangkok, and Prime Minister Hun Sen has welcomed Thaksin warmly in the past.

But senior members of the government and ruling party yesterday rejected the possibility of hosting any such government in exile, citing the constitution, which stipulates “permanent neutrality and nonalignment” and pledges noninterference, either directly or indirectly, in the internal affairs of other states.

“I think whoever feels that Cambodia is an option for a Thai exile government … it is not feasible, firstly because of our constitution, and secondly because we have a comprehensive regional mechanism as well as international [mechanisms],” Council of Ministers spokesman Phay Siphan said.

“We can’t allow such a government on our soil,” he said in a message posted on Facebook.

Since last week’s coup, the government here has been careful to maintain a neutral stance on Thai political issues, but has said it hopes the current military rule will be “transitional”.

General Prayuth Chan-O-Cha, head of the Thai army, has assumed all lawmaking powers in Thailand. Yingluck, fellow politicians and family members were detained by the military, though several media outlets reported last night that the former prime minister had been released.

Earlier this month, before the coup, Hun Sen spearheaded an ASEAN declaration that called for the Thai political situation to be resolved via dialogue and urging “full respect of democratic principles”.

When reached yesterday, Amsterdam, Thaksin’s lawyer, declined to confirm whether Cambodia had been contacted about the government-in-exile proposal.

“We are not discussing anything more than the fact that we are actively considering this. We are not making any statements yet. The situation in Thailand is incredibly fluid. We are preparing but we are not declaring,” he said in a phone interview. END_OF_DOCUMENT_TOKEN_TO_BE_REPLACED

The Ministry of Immigration and Manpower has ordered naturalised American citizen Moe Thee Zun to leave Myanmar by May 25.
The ministry advises him to apply for Myanmar citizenship in Thailand before re-entering the country.
Moe Thee Zun has been living in Myanmar since last August. He has also been paying a fine of US$3 per day for his expired visa.
At the invitation of the president office minister SoeThein, he arrived from the United States on September 1, 2012. He stayed for 45 days.
Subsequently, he returned for his second visit last year.
“I can live in this country. I am not breaking the law since I am paying the visa fine. Now I have been ordered to leave the country,” said Moe Thee Zun.
He said he would on Sunday depart for Thailand in order to apply for his Myanmar citizenship.
He has threatened to carry out political activities abroad if he is not permitted to enter Myanmar.
Before becoming naturalised American, he was the secretary general of All Burma Students Federation Union during the 1988 uprising. His past positions included the founder of Democratic Party for New Society, the chairperson of All Burma Students Defence Front (South).
During his student leadership, the Parjau massacre of students from ABSDF (North) happened in 1992. 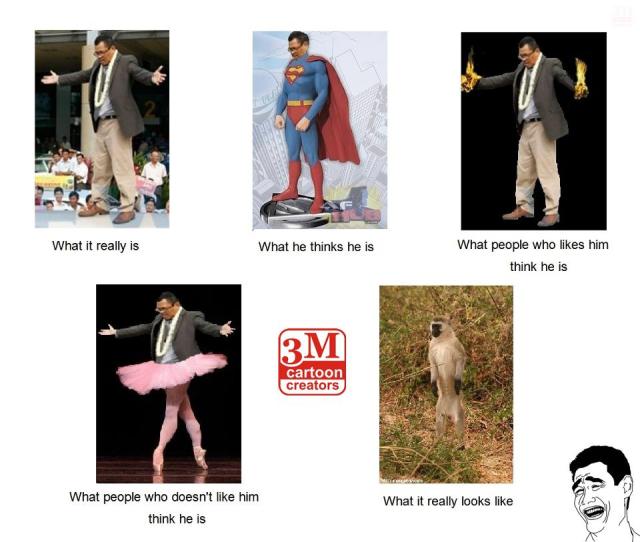 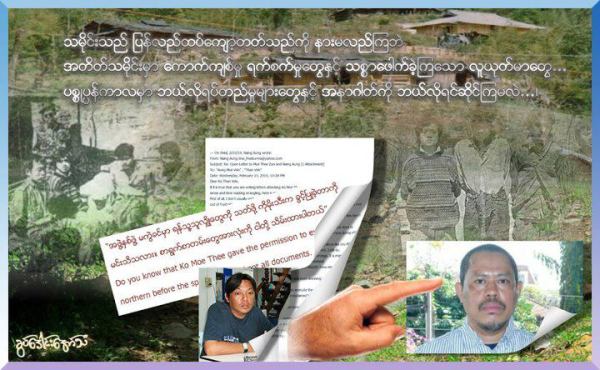 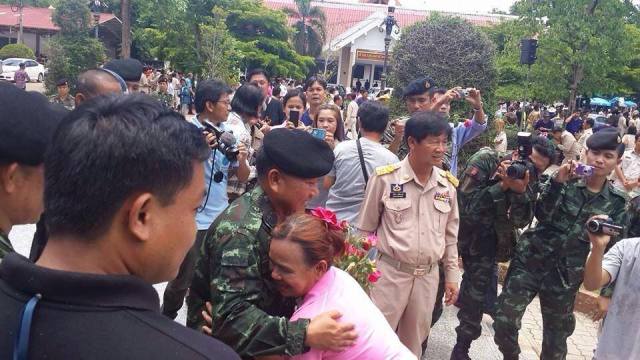 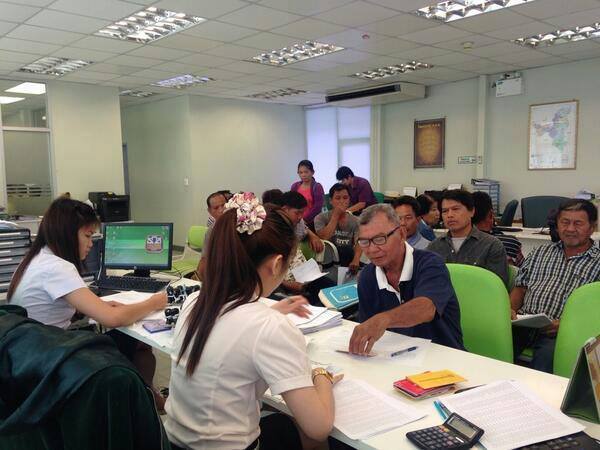 The Bank for Agriculture and Agricultural Cooperatives began paying farmers who sold rice to the previous Yingluck government but have not yet received money.

The first payment to farmers was held at Banglen district of Nakhon Pathom procince, and witnessed by Army officers.

The bank has set aside 40 billion baht to pay farmers.