Two clashes between army troops, government-formed Pan Say Kyaw Myint’s militia and Ta’ang National Liberation Army (TNLA) broke out on April 25, in Namhkham, northern Shan State, a TNLA official told Eleven Media.
On April 25, the TNLA Battalion 478 opened fire to the army’s Htainkan Camp in Lwel Chat Village in Namhkham.
The camp, a tea factory taken over by troops, situated along the Shwe underground gas pipeline.
“The ambush happened around 5 am Friday. The camp troops used force to collect money from the civilians,” TNLA’s secretary general Lt-Col. Tar Bone Kyaw told Eleven Media.
Afterwards, the TNLA raided the militia in Mongpan Village at 6:30 am and found eight M 22 long rifles, one carbine, one pistol and a number of illicit drugs, according to the information department of PSLF/TNLA (Palaung State Liberation Front/Ta’ang National Liberation Army).
The fighting between the government army, Pan Say Kyaw Myint’s militia and TNLA has started since the beginning of April. 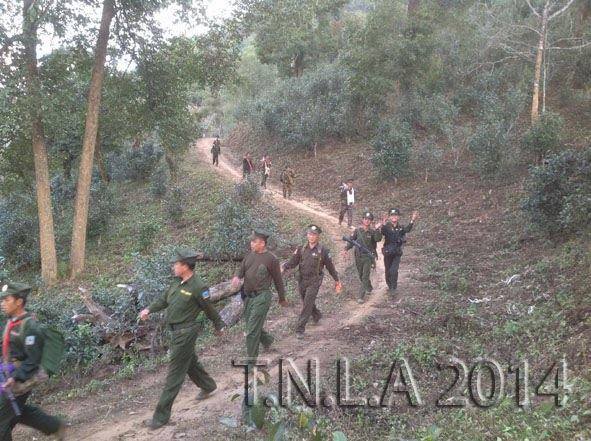 “When we organize our people, we need an access to the areas controlled by government. But they did not allow us and opened fire (at TNLA). That’s why fighting renewed. Pan Say Kyaw Myint’s militia was formed by the government and they could not resist its order and started fighting us,” said Tar Bone Kyaw.
The government forces under North-East Command and the TNLA’s Battalion-478 from Namhkham and Battalion-112 from Kutkai involved in the clashes.
“We fought with the remaining battalions from the government’s Division 88 which has been in Kachin State. According to local sources, there were 16 casualties from the government side and no casualty from our side,” said Tar Bone Kyaw.
The fighting would continue in Shan State unless the government stopped expanding the military presence, he added.
There was no response from the Ministry of Defence and North-East Command when contacted for comments.
The TNLA, an ally of Kachin Independence Army, operates in northern Shan State. It is an armed ethnic group that has yet to sign a ceasefire deal with the government.