The lies continue. The latest – a fake PDRC twitter account (on the left). Our real one is @CMDThai (on the right). Please help us share this information. Thank you. 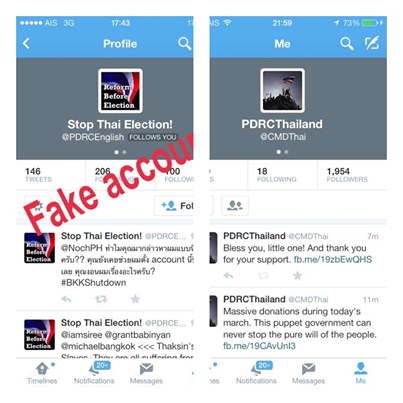 Dhakka police found that they were Myanmar—born Pakistani nationals and were “planning to launch their activities in Myanmar’s troubled Rakhaine state with their expertise to prepare high—powered explosives“.Police claim they are members of banned militant outfit Tehrik—e—Taliban Pakistan (TTP).

Three operatives of Pakistani Taliban have been arrested in Bangladesh and a laptop containing bomb making information has been seized from their possession, police said in Dhaka on Monday.

The trio —— Osman, Mehmud and Fakhrul —— were arrested last night from the capital.

Tomorrow we shall march along forbidden roads and gather in prohibited zones. We shall not stop our protests and believe there should be plenty of food for all.

TPBSProtest leader Suthep Thaugsuban has vowed to carry on with the protests in a peaceful manner in spite of the state of emergency which will become effective as of Wednesday.

Addressing a crowd of protesters at the Lumpini Park this evening, the secretary-general of People’s Democratic Reform Committee, said that if the police try to break up the protests he would ask the protesters to sit down, pray and let the police to make the arrests.

And if the police set up a roadblock, he would lead the protesters to walk through the roadblock, said Mr Suthep, adding that whatever the measures to be meted out by the government in enforcing the Emergency Decree, he said the protesters would stick to their ahimsa principle.

However, Mr Suthep said he would like to question the government’s justification to invoke the Emergency Decree.  He said that the protest situation now which has been relatively peaceful was totally different from the situation about four years ago when the red shirt followers resorted to violence prompting the Abhisit administration then to declare state of emergency in Bangkok.