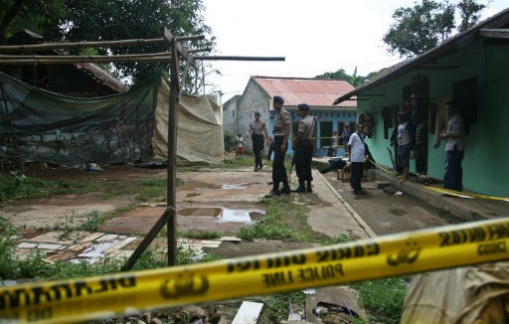 Indonesia’s elite anti-terrorism squad shot and killed six suspected militants and arrested another amid New Year’s Eve celebrations in an all-night standoff at a house near the country’s capital, a police spokesman said Wednesday.

Intelligence gathered from earlier arrests allowed police to storm hideouts in Ciputat on Jakarta’s outskirts as part of an investigation into an alleged plot to bomb the Myanmar Embassy and a Buddhist temple, said National Police spokesman Brig. Gen. Boy Rafli Amar.

The nine-hour-long shootout started late Tuesday when most Indonesians were preparing to celebrate the end of the year and ended Wednesday. Amar said those killed had refused to surrender and had fired guns and lobbed homemade bombs at security forces, injuring one police officer in his leg.

He said the men were suspected of being part of a larger group involved in robberies used to fund terrorist activities, mainly aimed at police. They also were linked to terrorist group led by Santoso — on the police’s most wanted list — in Poso, a flashpoint of terrorism in Central Sulawesi where a Muslim-Christian conflict killed at least 1,000 people from 1998 to 2002.

“There is a strong indication that they were involved in a series of police killings,” Amar told reporters, adding police found at least six homemade bombs at the house.

Police were trying to determine whether the men killed in the raid were connected to and alleged plot in May against the Myanmar Embassy to retaliate against Myanmar for attacks on Muslims in that country.

In August, a small bomb exploded outside a Buddhist temple packed with praying devotees in Jakarta. One person was injured, but two other devices failed to explode. Officials have said the attack appears to have been meant to avenge the deaths of Muslims in Myanmar.

Sectarian violence in Buddhist-majority Myanmar has killed scores of people, and tens of thousands of Muslims have been driven from their homes.

Indonesia, the world’s most populous Muslim nation, has been battling terrorists since bombings on the resort island of Bali in 2002 killed 202 people, mostly foreign tourists.

Such attacks aimed at foreigners have been largely replaced in recent years by smaller, less deadly strikes targeting the government, mainly police and anti-terrorism forces.