The Brazilian Government is able to provide refuge to a hero!
Anonymous supports Edward Snowden in Brazil!

Suthep Thaugsuban: I salute you, my fellow patriots, for joining us in this movement – our ultimate battle against injustice! Thank you and good night!

Suthep (20:41): Red-shirted countrymen, we invite you again to join us. Your voices will be heard and your interests represented faithfully after our reform. We welcome you!

Here’s our route tomorrow.!!!  19.DEC.We hope the “free TV” channels will broadcast our march to victory!

The DSI has called us in for an investigative interview – an attempt to disrupt our work here. I told him: we’re too busy rescuing our nation. We’ll be there after we win.

On 22nd Dec. we start at 1 pm. Join us here at Rajdamnoen. We’ll have screens set up at Urupong, Petchburi, and Victory Monument all the way through Rajthevi, Pathumwan junction, Sam Yan, and Lumpini Park. For our Sukhumvit friends, we”ll have screens set up at Pathumwan junction in front of Siam Paragon, and at Rachprasong Junction in front of Central World. Join us wherever you are! I’ll come see you! 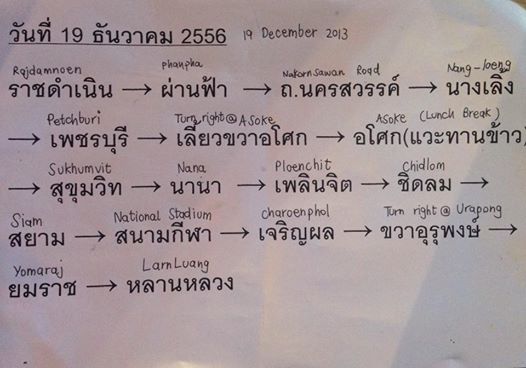 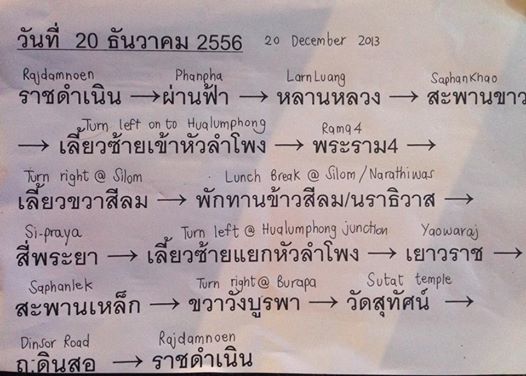 SUTHEB : My brothers and sisters, it’s time to move! Let’s warm-up on the 19th and 20th to gear up for our historic rally on the 22nd. It’s time for you to go, Yingluck! We’re not leaving until you do!
SUNDAY 22 DEC is the day when all will rally to officially oust Yingluck Shinawatra from the prime minister’s post
Foreign diplomats will be invited to observe first-hand the anti-government demonstration at the Democracy Monument tomorrow, a leading protester said today.
Akanat Promphan, spokesman of the People’s Democratic Reform Committee (PDRC), said the group has never contemplated occupying foreign embassies in Bangkok but would rather enhance relationships with them.
He called on the Thai people to wait for a signal from protest leader Suthep Thaugsuban on another round of massive demonstrations to press for a national reform before the general election is held. The snap poll is set for February 2.
Mr Akanat said several countries have better understanding on the PDRC’s principles and its determination to reform Thailand following the group’s clarifications to the foreign media.
Mr Akanat said the Defence Ministry has yet to understand the PDRC’s principles of adhering to the Constitution and democratic system but the group insisted on a national reform before the next general election is held.
If not, the country will remain chaotic and the vicious cycle will return, he said, calling on Permanent Secretary for Defence Nipat Thonglek to show responsibility for tarnishing the military’s reputation and giving a contradictory opinion from the supreme commander who emphasised neutrality. 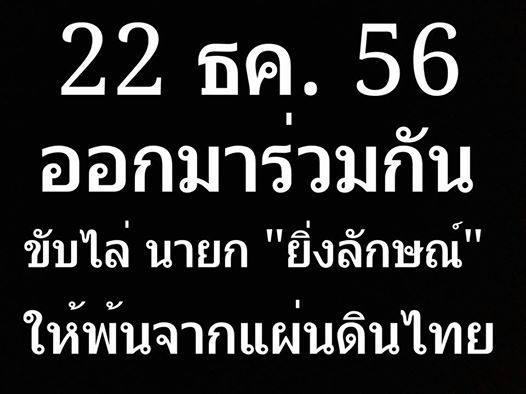 On 22nd Dec. we start at 1 pm. Join us here at Rajdamnoen. We’ll have screens set up at Urupong, Petchburi, and Victory Monument all the way through Rajthevi, Pathumwan junction, Sam Yan, and Lumpini Park. For our Sukhumvit friends, we”ll have screens set up at Pathumwan junction in front of Siam Paragon, and at Rachprasong Junction in front of Central World. Join us wherever you are! I’ll come see you! 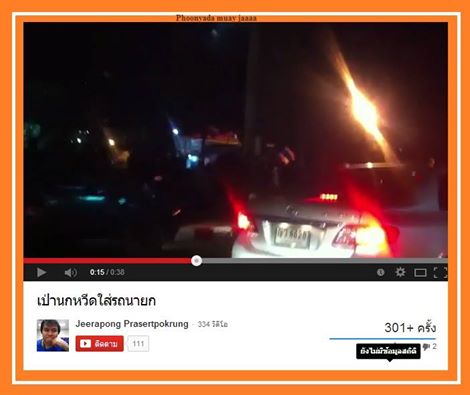 A riot broke out at Thuwunna Stadium on Monday night after Myanmar lost 1-0 to Indonesia in the men’s football last group match and got knocked out of the tournament.

The football match was the most anticipated event during the 27th SEA Games and Myanmar fans had high expectations that their side would reach the semi-final.

The team had already won against Cambodia and East Timor in earlier matches and tied 1-1 with Thailand. They needed a win or a draw to proceed to the semi-finals.

Myanmar team’s coach, Park Sung Hwa from South Korea, has received the bulk of the blame for his choices of players for the lineup and substitution, which was missing many of Myanmar’s star players.

Myanmar’s team had a total of seven points and needed either a draw or a win to proceed in the tournament. However, after the match Park Sung Hwa told a press conference that he was unaware of the head-to-head rule and he had expected Myanmar to proceed even after loosing.

He apologised and said he took full responsibility for the disappointing result. Moe Wai, media officer of the Myanmar U-23 team, confirmed that Park Sung Hwa had subsequently been sacked.

“His single decision destroyed the hopes of the 60 million fans in Myanmar,” added Chit Win Maung.

The disgruntled crowds started throwing water bags and shoes onto the pitch and tearing up seats as the Myanmar team was unable score in the closing minutes of the game. Three men also ran onto the pitch and were detained by security guards.

After the match ended, angry fans set fire to their Myanmar team t-shirts and tickets outside the stadium’s gate. Some even destroyed the SEA Games billboards featuring the players in front of the Thuwanna stadium, and began throwing stones at security and traffic police.

The police in return launched a crack-down on trouble makers using water hoses from fire engines. The number of angry fans soon increased forcing the police to retreat, regroup with more men and finally force the crowds to disperse.

The riot ended around 11:45pm and the police say they have arrested some of the troublemakers.

“The angry mobs put fire to their clothes and billboards. We will arrest those who committed crimes and to release who didn’t commit crimes. We have released the men who entered the playground. I don’t think this kind of incident should happen. It shows that Myanmar has not matured,” said a police officer.

Some football lovers however voiced their disappointment saying that the the SEA Games is over for them if Myanmar is no longer in the football tournament.

“For nearly all of us football is a national sport. Now that our football team is out of the SEA Games, our interest on the SEA Games is over,” said a salesman who was at the Myanmar-Indonesia match. 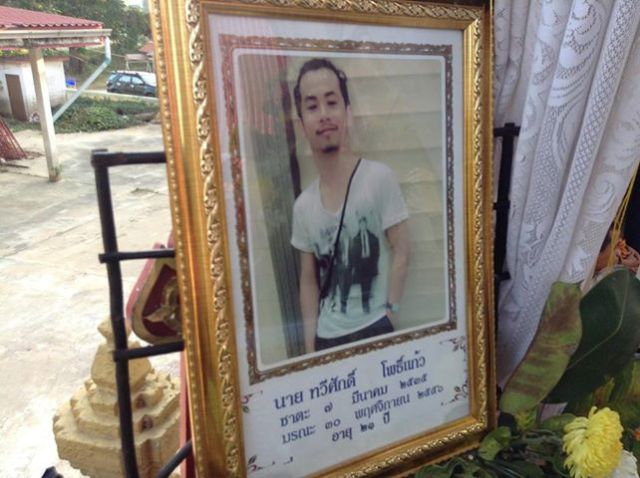 The students were rallying inside the university compound attacking the ignorance of the Hua Mark police to probe into the shooting which left one of their colleagues shot dead, and over 50 injured from gunshot wounds and small bomb explosions thrown on November 30 and December 1 during the rally of the red-shirt supporters of the government at Rajamangala stadium.

The students said so far they did not receive any progress in the probe and doubted the police might not take the case seriously. 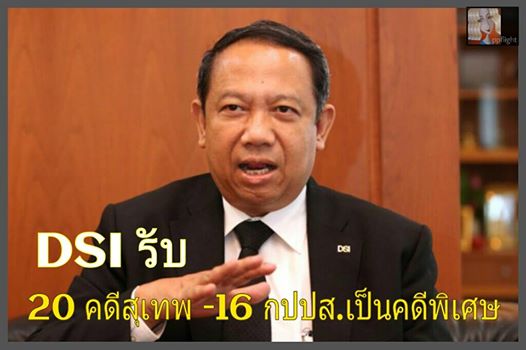 THAI PBS
Six criminal cases against Suthep Thuagsuban, secretary-general of the People’s Democratic Reform Committee (PDRC) and 16 key members of the protest group have been accepted as special cases. END_OF_DOCUMENT_TOKEN_TO_BE_REPLACED

The army cannot remain aloof of politics because soldiers whose main job is to handle national security have another duty like the other Thai citizens, said Army Commander-in-Chief General Prayuth Chan-ocha in a statement released Monday by the army spokesman.

The statement is apparently meant to make clear the army’s standpoint in light of the current political conflict and in response to widespread criticism against the army’s aloofness from the conflict.

The conflict is unprecedented and the saying that the army should not get involved in politics cannot be applied fully because soldiers, besides their duty to look after national security have another duty too which is the duty of Thai citizens, said the army chief.

In light of the ongoing conflict, he said that the army was focused on how to prevent the conflict from spiralling out of control into a civil war.  He urged the opposing parties in the conflict to try all means to resolve their differences in a peaceful manner so that the state mechanism can function as normal.

“The principle is that all sides must be satisfied with and accept the existing rules and laws; must not breach them or  trade accusations at one another to the point that a settlement is impossible because all the systems and rules are destroyed which will put the country at great risk,” said the general in his statement.

Thaweeporn Kummetha
Thai police have charged an anti-establishment red-shirt supporter with lèse majesté for his coded speech at a red-shirt gathering at Rajamangala stadium on Ramkhamhaeng Road in late November.
A video clip of the speech was widely circulated on social media sites before it caught the attention of the law. A group of Internet users also disclosed his photo, home address and phone number as an act of political cyber bullying. They also found that he worked for a motor company and pressured the company via its Facebook page to punish him to show its “moral and social responsibility”.
Eakachai, last name withheld due to privacy concerns, 22, made the speech on November 27, at a sideline red-shirt stage around the Rajamangala stadium where the United Front for Democracy against Dictatorship (UDD), the main faction of the red shirts, organized a gathering to show support for the government.
At one point in the speech, Eakachai told a story of a family headed by “Uncle Somchai and Auntie Somjit” and the offspring of the couple. The speech attracted a loud acclaim and applause.
At the end of the story, Eakachai spoke to the audience. “You guys feel a thrill of fear, but also like [the story]. But for me, I’d have to ask myself if I’ll be able to get through this. But I don’t care, because I didn’t refer to anybody. My speech isn’t illegal.” Apparently the police do not think so.
The fictional characters of Uncle Somchai and Auntie Somjit first appeared on the hard-core anti-establishment Same Sky web forum around 2010. The characters are known among people critical to the monarchy as code names used in a society where a speech can land a person in jail for several years or get them fired from their job because of political cyber bullying. The couple also feature in a song of Faiyen, an anti-establishment red-shirt pop band. The song is very popular among red shirts.
Article 112, the lèse majesté law, states that whoever defames, insults or threatens the King, Queen, Heir-apparent or Regent shall be punished with imprisonment of three to fifteen years.
Eakachai is a core member of the progressive Red Siam group and a disciple of Surachai Sae Dan (Danwattananusorn), who was found guilty on five lèse majesté charges, but later released on a royal pardon. Eakachai recently founded Gear of Red, which is a group of red-shirt vocational students and former vocational students.
https://www.facebook.com/pages/My-name-is-Eakapop/178865848929355
Eakachai is still at large. On Saturday, police summoned his parents for questioning.
###########
thai pbs
A complaint was lodged with the Crime Suppression Division police by a former Pheu Thai MP and his lawyers against protest protest leader Suthep Thuagsuban accusing him of having committed lese majeste.

Suchart Lainam-ngern of Lop Buri, accompanied by a group of lawyers from the Northeast, met with Pol Col Prasobchoke Prommoon, deputy commander of the CSD, and handed over to him video clips recording Suthep’s speeches urging the people to boycott the February 2 election.

Suchart claimed that Suthe’s actions amounted to lese majeste in accordance with Article 112 of the Criminal Code.

Pol Col Prasobchoke  told the complainants that he would check their evidences first and would bring up the case to the attention of the National Police Office at the forthcoming meeting. 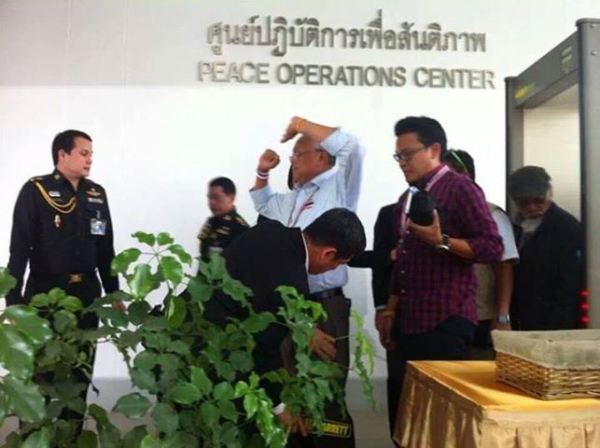