NOWADAYS MTZ SHOWS UP EVERYWHERE INSIDE BURMA ON PICTURES……

Where is true and law in Burmese ? ?

Moe Thee Zun Charged with Htay Naing’s 1993 Murder
(This post is direct translation of news articles from the MEG.)

According to Daw Khin May Myint she had lost contact with her two sons Htay Tint and Htay Naing for more than 15 years since they took to the jungle on Thai border after the failed 8-8-88 Uprising in 1988. Only in 2004 the elder son Htay Tint called her and told her that his younger brother Htay Naing the Chief-of-Staff of the student army ABSDF was severely tortured and jailed and eventually killed by Moe Thee Zun, then the ABSDF Chairman, at Manerplaw KNU stronghold in some time 1993.

Daw Khin May Myint has reported her son’s murder to the President’s Office on 12 September 2012, after learning from the local media that Moe Thee Zun has come back to Burma for political purposes, and the President has directed the Rangoon Division Government to take a criminal action against Moe Thee Zun and accomplices.

As per the President’s directive the Rangoon Division Government has decided at the governmental meeting (44/2012) held on 22 November 2012 to allow Daw Khin May Myint submit a criminal complaint against the accused Moe Thee Zun. And Daw Khin May Myint has lodged the official murder complaint with North Dagon Police on December 13.

Moe Thee Zun (aka) Myo Than Htut a recently-naturalized US citizen is known to have been back in Burma recently. But his present where-about is unknown and he is still not in the police custody, confirmed the North Dagon Police Station.

Following remarkable story of Htay Naing’s brutal murder was from Than Win formerly the General-Secretary of ABSDF Central at Manerplaw KNU Headquarters and a close friend of now-deceased Htay Naing.

Former ABSDF Chairman Moe Thee Zun.
Friends and comrades, Moe Thee Zun just sent me a secret email telling me that at this very important time for our country he will not be defending my baseless accusations of Htay Naing’s 1993 murder as he didn’t kill Htay Naing. For me whether he killed Htay Naing or not is to be decided by the people. I will just explain whatever information I have so far. 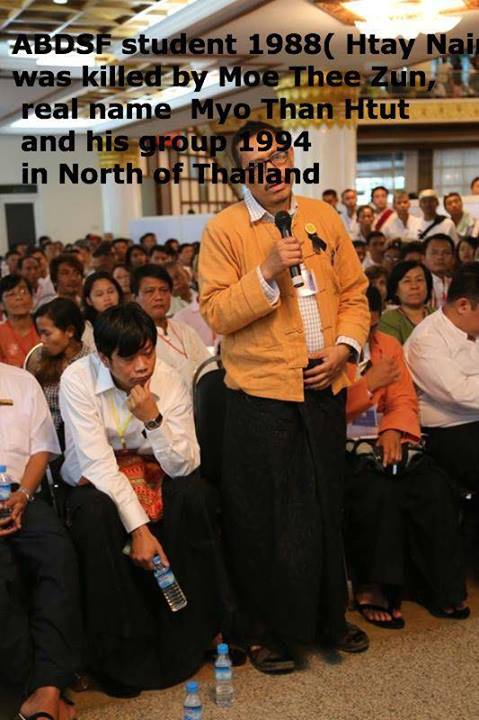 After the military coup in 1988 I fled to the border and ended at Thay-baw-boe ABSDF camp. Then was the first ever ABSDF and I was the General-Secretary. Two – three months later Htay Naing followed me and joined ABSDF. He basically lived with me at Thay-baw-boe camp.

When ABSDF split into two groups in 1991 he joined our faction led by Moe Thee and Ko Ko Oo and me. Moe Thee was the Chairman, Ko Ko Oo was the General Secretary, and I was the EC. And Mo Thee made Htay Naing the Chief-of-Staff.

Then me and Ko Ko Oo had to go to the ABSDF South. While we were away we heard that Mo Thee had arrested Htay Naing and put him in a made-shift jail. By then the ABSDF North was already arresting their own people. Htay Naing was put in jail one month after the accused spies were arrested in ABSDF North.

So I and Ko Ko Oo radioed Moe Thee and asked why he arrested Htay Naing? His explanation was that when the ABSDF North tortured the captured spies they confessed Htay Naing was one of them.

But I didn’t believe that and I strongly protested against the arrest of Htay Naing. I told him that Htay Naing could not be a spy as we had worked together for a very long time and I would take full responsibility for Htay Naing and he had to be released immediately.

Ko Ko Oo also radioed Moe Thee and demanded as the General Secretary of ABSDF to release Haty Naing immediately. But Moe Thee didn’t care and stubbornly refused to let Htay Naing go. So I angrily told Moe Thee at Manerplaw that I was coming there with my troops to forcefully get Htay Naing out.

As I and my men were preparing to march north to Manerplaw a radio call came in from Colonel Hton the Thai Army Intelligence Chief then stationed at Chang Mai. He simply warned me not to come back into Thailand as Mo Thee had already bribed Thai Police at Maesaring with 100,000 Thai Baht to kill me once I stepped into the Thai territory.

To get to Manerplaw on the border from our position in south we had to cross the border and travel some distance in Thailand first and then cross back into Burma at Manerplaw.

I was surprised and at the same time really angry at that bastard Mo Thee Zun. So we had to abandon our plan to march to Manerplaw. Well before Manerplaw fell into the hands of Burma army in January 1995 ABSDF had to move their HQ out of Manerplaw. And I heard the bad news that Moe Thee killed Htay Naing instead of taking him and other prisoners along with them.

Later when things calmed down I went there and met many people who had witnessed Htay Naing’s arrest and torture and murder. Following was what they told me.

“At the beginning of his arrest Htay Naing was tied-up and cuffed and kept in a tiny bamboo hut inside Manerplaw ABSDF Central. Two weeks later they dug a tiny but deep hole in the ground on the opposite bank of Thaungyin (Moei) River and put Htay Niang inside naked.

Hole was so small he was always in a squat and eventually he lost the ability to stand up and finally paralysed from the waist. One of the guards who had to send meagre food regularly to Htay Naing in the hole told me in tears that Htay Naing, by then his whole naked body was covered with nasty skin rashes, begged him to shoot him as he couldn’t take it no more.

One ABSDF man Ye Lin also told me that when Moe Thee and ABSDF Central were moving the camp out of Manerplaw they tied him up and put a gunny bag over his head and forced him to sit on a boat and so that Moe Thee could point him as Htay Naing the prisoner to the Bo Mya and his KNU Karens. Just to trick the Karens that Htay Naing was still alive!”

Even though he might not kill Htay Naing personally I truly believe that Moe Thee is fully responsible for the murder of Htay Naing as he was the man who definitely ordered Htay Naing’s brutal torture and eventual killing.

Following personal confession of Htu Htun Oo formerly of ABSDF Central was from Htay Tint the elder brother of murdered Htay Niang. He was telling how he killed Htay Naing to Htay Tint the victim’s own brother.

ABSDF men at KNU’s Manerplaw stronghold.
In sometime 1993 I was told that an enemy spy was caught inside Manerplaw. So I went and saw Ko Htay Naing tied-up and cuffed inside the jail. I couldn’t believe my own eyes. He was the ABSDF army’s Chief-of-Staff I well respected.

(I even kept the arrest-order signed by Moe Thee Zun and issued by the ABSDF Central for a while, but I’ve lost it in the jungle later.)

I was a young student from GTI (Government Technical Institute) and just a teenager back then. I respected Ko Htay Niang as a senior officer and I loved him like an older brother. Whenever we were given food-ration he would call me “kid brother” and gave me more than others I still remember.

I was told he had an elder brother in Bangkok. Hla Win another teenager told me but I didn’t believe him as I’d never seen or heard of you before. Only now at Maniloy I met you.

I think, in 1993, Moe Thee ordered us to deliver weapons to the Communists on the Pegu-Yoma. I and a few others carried 25 automatic rifles and many hand grenades down to the water and put them in the boat waiting on the river at Manerplaw.

Later KNU (Karen National Union) men knew of that secret weapon transfer to the Burmese Communists and arrested all of us and threatened to kill us all. Once ABSDF leaders knew of our arrests they brought in foreign media reporters and pressured the KNU Karens to release us. For obvious reasons the KNU Karens are always scare of bad news about them in the international media.

KNU released us quickly but they also kicked all of us out of their Manerplaw HQ. While we were preparing the motorised-long-tailed boats for our move to the Kareni-controlled area our leaders started scratching their heads about what to do with two prisoners in our made-shift jail. Moe Thee, Dr. Naing Aung, Lwan Ni, and Ba Saw Htun, all of them bastards.

And they decided to kill both and left the bodies with the Karens as no one wanted to take them along dead or alive. Instead of shooting Htay Naing I decided to inject poison. The injection was so strong the big guy didn’t even last five minutes.

(As a Rangoon University’s champion Volleyball-player and a Mathematics Major student Htay Naing was much bigger and taller than most Burmese man.)

Thaung Yin (Moei) River at Manerplaw.
Other one, I think his name might be Hla Win, I shot him point-blank in the head just to test my recently-acquired pistol. I had two of them pistols on my belt-holsters. No one ordered me. I just did it. Just one single shot!

Back then I was not in a right mind and I was quite angry, for we were just let out from the Karen jail.

After I had killed them, the Karens came and asked about Htay Naing. Just to trick them Karens we just tied someone up in the boat and put a gunny bag over his head and pointed the Karens to him as Htay Niang.

We then dumped the bodies of Htay Naing and Hla Win in the nearby bushes. Only when our boats were motoring away from Manerplaw we yelled out to the fucking Karens that we’d killed both prisoners and left the bodies there.

(Translator’s Notes: 1993 as the year of Htay Naing’s murder is still being disputed by some former ABSDF members who have been suggesting that the time of Htay Naing’s death was March 1994 almost a whole year before KNU’s Manerplaw fell in January 1995.)