Burma’s political and economic opening has enticed scores of foreign investors and spurred a real estate boom. But many Burmese feel they are not getting a fair deal when big business buys up land for development. Now roving legal advisers are traveling the countryside, advising citizens on how to assert their rights.

Land values are soaring in parts of Burma, even in ethnic states, where fighting has left thousands homeless. The government hopes foreign investment will lift the fortunes of millions, but many feel they are already being left out of the profits.

Few people have legal land deeds and the former military-backed government confiscated huge tracts of land years ago. For many people, the sale of property they are living on will not mean a big payday.

“The problem is that the state is the sole owner of all land in our country. It’s [a] constitutionally provided provision as far as land issues are concerned,” he said.

Htoo trains fellow lawyers and activists to help people fight for compensation. It is an uphill battle.

“Our training is aimed to provide education to the important activists and some lawyers and law graduates so that they have more awareness on the constitution. So that they may be able to become trainers to provide multiple training to the rest of the people,” explained Aung Htoo.

Recent land reforms now allow farmers and land owners to be given compensation – even if the state still holds the deed. But as land disputes erupt across Burma, some worry the problem could grow along with foreign investments.

“When farmers are using the land to sustain themselves their communities are forced to sell their land where they don’t want to move. There isn’t any other land but the government or a company is basically forcing them off their land. It’s forced compensation and they are being told in a number of circumstances, either you take it or leave it,” said Donowitz.

But Aung Htoo hopes his students find a third option: to press their case in the courts or through public opinion. He says the ultimate goal is to change the constitution.

“If the government has a sincere objective to bring development for the entire people, they must try to amend not only the constitution but also other relevant laws so that the people shall enjoy the right to own the land and the right to manage the land,” said Aung Htoo.

In the meantime, Aung Htoo’s classrooms will be a place where citizens learn about the current laws, so they can become more successful at pressing authorities to change them.

Myanmar Press Council (Interim) will submit a media bill directly to the Parliament following disagreement with the Ministry of Information over revision of the draft version.

The Press Council made the decision to submit its version of the media bill through a MP at the meeting with two deputy ministers and the Lower House’s Sports, Culture, and Public Relations Development Committee on July 24 after the deputy ministers decline to state clearly whether or not the Ministry will submit the bill to the Parliament.

“Our bill includes 17 provisions that the Ministry of Information does not like. That’s why we’ll be submitting it directly through a MP,” said Zaw Thet Htwe, member of the press council.

“There used to be only one law for the media. The press council was commissioned to amend this [law]. After we were commissioned, the Ministry of Information submitted another one so there are two laws. They say they have separated this issue into half. It’s like diving a coin into a half. They are separating something that cannot be divided into two,” said Pe Myint, another member of the press council.

U Pe Myint said that the press cannot do anything without publications so the Ministry is restricting press freedom in their press bill.

Ye Htut, one of the two deputy ministers, said the conflict between the Ministry and the press council is due to longing and anxiety. While the Ministry is anxious as the country passes through a nascent reform, the press longs for freedom as they have lived under oppression.

In response to Ye Htut, Kyaw Min Swe said:”A law cannot be drafted based on longing and anxiety because [the country] is changing from one system to another. It’s typical to have doubts and suspicions on each other during this period. Problems will arise if ethics are drafted with these suspicions. In order to have a flourishing democracy, the law has to be drafted without these [suspicions]. If the law was drafted with doubts and suspicions, there could be violence, problems, and protests after it has been enacted.”

Kyaw Min Swe added that the media bill will be submitted to the Parliament through the Sports, Culture, and Public Relations Development Committee within a few days.

Thura Aye Myint, chairman of the Sports, Culture, and Public Relations Development Committee, said the committee accepts the media bill and will quickly submit it to the Parliament.

Myanmar’s parliamentary speaker for the Union Assembly’s Upper House, Khin Aung Myint, will be retiring after two years of service. The role will now be carried out by current Lower House Speaker Thura Shwe Mann.

Republic of the Union of Myanmar

The President’s Office of Myanmar announced another major reshuffle of its government cabinet on Thursday, but observers say the reshuffle may be not enough to tackle vast corruption among some government ministries. END_OF_DOCUMENT_TOKEN_TO_BE_REPLACED

A federal armed forces that incorporates all the armed forces of the country into a single entity should be in place, before the West establishes closer military ties with Burma, said Sao Yawd Serk, Chairman of the Restoration Council of Shan State/Shan State Army (RCSS/SSA) yesterday.

“Or they will just serve to strengthen the hands of the Tatmadaw (Burmese military) against the resistance forces,” he told a meeting held yesterday on the Thai-Burmese border.

A participant agreed pointing out that, according to the 2008 constitution, the Burmese military’s self-appointed mission, contrary to other democracies, was to wage war not only against external dangers but also internal ones.

This was the first time the leader of the Shan resistance movement that had concluded a ceasefire with Naypyitaw on 2 December 2011 has spoken publicly in response to recent Britian’s approval to $ 5 million arms export licenses to Burma.

The Burmese military has also been offered training courses in human rights, the laws of armed conflicts and the accountability of armed forces in democracies. “The training should not only be provided to the Burma Army, but also to the resistance armed forces,” he said. “It can wait until a federal armed forces has been formed.”

Many of the ethnic groups have proposed that the Chief Minister of a State/Region be elected and he/she, by virtue of it, automatically becomes the Commander-in-Chief of the armed forces of the state/region concerned.

According to the 2008 constitution, the Chief Minister is appointed by the President. Both of them have no say in military matters.

So far, the RCSS/SSA, like its sister organization in the north, Shan State Progress Party/Shan State Army (SSPP/SSA), has fought more than 100 clashes since the ceasefire. The last one took place in Kyaukme on 24 July.

On July 25, U.S. Ambassador Derek Mitchell and Deputy Minister of Culture U Than Swe met in Mandalay to announce a historic new partnership between the U.S. Embassy and the Ministry of Culture to undertake the cultural preservation of the Shwe Nan-Daw Monastery (Shwe Kyaung). The project builds on several initiatives by the Embassy to work with the government and civil society groups on promoting respect for the diverse cultures and religions of this country.

Shwe Nan-Daw Monastery is one of the most visited monasteries in the country. It formerly served as the northern chamber of Mandalay’s Glass Palace, and it is the only apartment of the former 19th century Kon Baung palace to survive World War II. The original chamber was built by King Mindon, who died inside, and later moved to its current location and refurbished as a monastery by King Mindon’s son, King Thibaw. 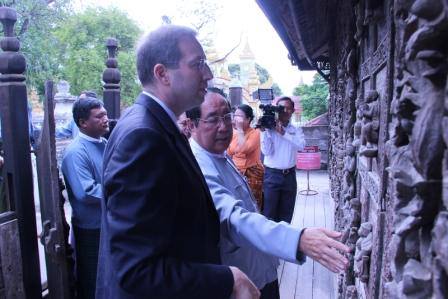 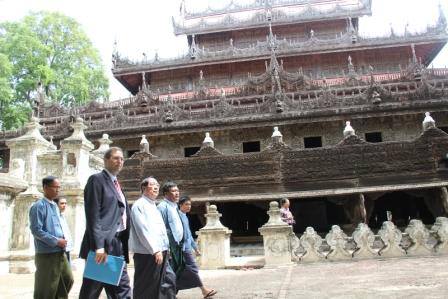 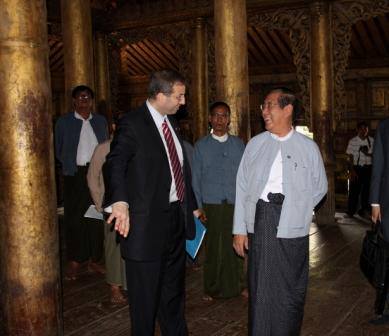 Myanmar’s Marine Police Force (MPF) members are reportedly preparing to be posted in three port cities of the Rakhine coastal region in western part of the country.

A MPF official says the chosen location for the base include Sittwe and Kyaukphyu for MPF offices, which will take responsibility for security in Myanmar’s waters.

A company of marine police force will be deployed at Kyaukphyu port while two platoons will be stationed in Sittwe and Thandwe ports.

More marine police forces will also be formed and stationed at other seaports of the country such as Yangon, Dawei, Pathein, Mawlamyine, Myeik, Kawthoung, Mandalay and Wanpon (Megong).

Marine police forces are mainly responsible for prevention of human trafficking, arms and narcotic smuggling, sea robbery and transnational crimes and ensuring the rule of law in the country’s waters.

“Rakhine coast borders both the land and waters of Bangladesh, where people cross in and out illegally. We need not only naval forces but also marine police forces for security. We have learned Sittwe will have only a platoon of marine police. So it is necessary to have a larger force and use modern weapons and high speed boats like in Bangladesh,” said a Maungdaw local resident.

About three years ago, a robbery gang of Bengalis reportedly robbed some villages of Maungdaw and Yathedaung townships in Rakhine state and raided the outposts of border immigration control forces. After committing a robbery, those Bengalis reportedly went into hiding through the water route. They also committed other offenses such as robbing cattle, stealthily catching fish and smuggling drugs.

Sittwe used to have marine police forces and customs patrol watercraft 40 or 50 years ago.

Senior General Min Aung Hlaing, the current commander-in-chief of the Myanmar Armed Forces, urged General Fan Changlong of China’s the People’s Liberation Army during their encounter on July 23 in Nay Pyi Taw, the official capital of Myanmar, according to state media.

The senior general said there are evidences that groups of drug dealer are operating secretly at the border, and Myanmar’s military is working to crack down the drug dealings as a national duty, and both countries should work together against it as it’s also a big problem for China.

He also told Gen. Fan that both countries should cooperate to clear out any illegal armed forces at the border, adding that Myanmar wishes for China’s help to handle the border issue in accord with its existing laws to keep it peaceful.

General Fan said Chinese military will work together with Myanmar’s counterpart for the issues such as the border’s stability, security and anti-narcotics at the meeting.He also met with President Thein Sein on that day in the capital to discuss bilateral cooperation and promoting the relationship between the two countries.