★ Here is the updates for–> 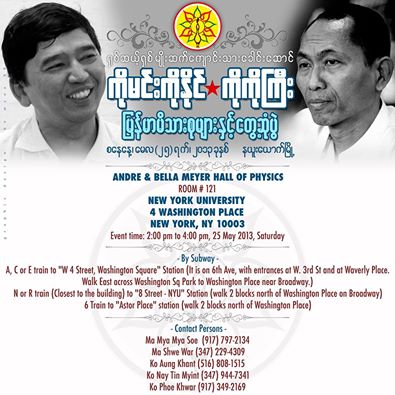 The identity of the man who has confessed to being Dr Seik Phwar will soon be revealed by the Parliament in the coming future, according to a member of the investigative commission.

“We have finished writing our report. One of the people we have called for investigation has confessed [to being Dr Seik Phwar]. What I mean by confess is that he said he will take the responsibility,” the commission’s member Hla Swe told the press yesterday.

The commission’s chairperson Mya Nyein has told everyone in the commission not to reveal the identity before it is announced by the Parliament, he added.

Dr Seik Phwar came under fire earlier this year after he wrote a commentary criticizing Parliament members. An investigative commission was formed to investigate his identity and take action on him.

He has also criticized National League for Democracy, other politicians and local media on the internet.

China has reportedly approached Myanmar’s opposition National League for Democracy (NLD)  to help push for the resumption of the Myitsone (confluence) dam project in Kachin state.

The approach was made during the 10-day visit of an NLD delegation to the People’s Republic of China at the invitation of the ruling Chinese Communist Party.

Myanmar President Thein Sein announced the suspension of the project, which was being built on the Ayeyawady River near Tanphe village, about 7 kilometers downstream of the confluence, in September 2011.

“We met Kunming governor. When we arrived in Beijing, we called on government officials, including director general of foreign affairs department. We also met government deputy ministers. They expressed their willingness to re-undertake the Myitsone dam project. They said they wanted to make investment in the project.”

The RFA news stated that China wants to continue to invest in Myanmar and express heart-felt thanks to NLD leader Aung San Suu Kyi for giving help in the controversial China-backed Latpadaungtaung copper mine project.

Lower House MP Phyu Phyu Thin, who is a member of the visiting delegation, told the Eleven Media Group that Aung San Suu Kyi would be informed of details about the study tour, including China’s willingness to resume the Myitsone dam project.

However, some experts say that the resumption of the project will draw widespread criticism even if the NLD leader supports it.

“The project should not continue. China will approach us for what they want to do. The Chinese government insisted constructing three dams in the Yangtze river amid public objections, said writer Ko Tar. “Myitsone is our treasure and the land of Kachin. We cannot bear giving it to aliens. That’s why the project should never continue, he explained.

Forestry expert U Ohn said: “Myitsone is the origin of the Ayeyawady River, which is the lifeblood of Myanmar. The river represents our culture, history, prosperity and all. We totally oppose the project. Instead of the large Myitsone dam, it is more appropriate to build a hundred of small dams with no more than 15 metres in length and less than 50 feet in height.”
“From the perspective of water resources, the river does not flow well in summer. We should not see it economically but environmentally and socially. China is very keen on the project because its people need electricity,” U Ohn said.

President Thein Sein sent a message to Parliament in September 30, 2011, saying the Myitsone dam project would be suspended during his presidency.

The 10-point message stated that the project was suspended as public concern mounted over possible damage to the Ayeyawady River. The melting of glaciers in the northern part due to climate change, heavy rains, strong quakes are considerable factors to cause destruction or damage to the Myitsone dam and Ayeyawady river, thereby threatening the lives of local people, the message described.

Environmentalist Myint Zaw said that any ruling government and political party should seek the long-term interest of the Ayeyawady.

“As the Ayeyawady is the national character, political parties and state leaders should not sacrifice our Ayeyawady for economic gains,” he said.

Khun Jar from the Kachin Peace Network also said: “Anyone who wants to continue the Myitsone project is the enemy of the entire nation. Mega dams are no more popular in the world. Myanmar is also in need of electricity. Small dams should be considered if we have little environmental impact, and if the people are secure.”

She said she could not understand why the NLD discussed it with China because it is not an economic organization or was not delegated to do so.

The Ayeyawady river must be protected as its watershed areas account for 65% of the total area of Myanmar, Khun Jar suggested.

As Myanmar has improved its relations with western countries, including the United States, since Thein Sein’s government took office, the Chinese government has come to build closer relationship not only with the Myanmar government but also with the opposition NLD.

Chinese Ambassador Yang Houlaan recently called on NLD chairperson Aung San Suu Kyi, who is popular among the public to win the 2015 election and come to power. The ambassador donated 1 million kyats to the NLD’s education network funds.

Suu Kyi did not include the visiting delegation as the Chinese Communist Party only invited those under 60.

Importantly, the military’s role in the 2015 national elections could determine the future of political and economic reform.

The question is whether the United States should refuse to engage and roll the proverbial dice, or engage and try to support good decision making by Myanmar’s military leaders. (Murray Hiebert is senior fellow and deputy director of the Sumitro Chair for Southeast Asia Studies at the Center for Strategic and International Studies in Washington, D.C. )

The United States should move forward with prudence and clear expectations about its military engagement with Myanmar. This would give encouragement to officers who want to follow the example of the Indonesian military, which gradually eased out of politics after the toppling of President Suharto in 1998. Exchanges could help the military recognize that there will be no real political solution to the country’s ethnic conflicts until the government considers increased power- and resource-sharing.

When Myanmar president Thein Sein visits Washington next week, President Barack Obama should arrange for him to make a trip to the Pentagon. Myanmar is a key member of ASEAN, wedged like a keystone between China, India, and Southeast Asia. This strategic value means that the United States shares with Myanmar an interest in professionalizing that country’s military.

Thein Sein, a retired, and by most accounts clean and honest, general-turned-reformer would feel comfortable interacting with senior U.S. military officers and Secretary of Defense Chuck Hagel. U.S. officers could reinforce the administration’s thinking about what more Myanmar needs to do to achieve full normalization of relations and restore military-to-military ties between Myanmar and the United States.    http://csis.org/publication/president-obama-should-invite-myanmars-president-visit-pentagon

We must recognize the important role of Myanmar military during this democratization process. Under the past system, Military took charge of the nation’s stability from security point of view. Now, we are in the process of reforming the Military for its role in the democratization and peace building processes.
ႏုိင္ငံေတာ္သမၼတႀကီးရဲ႕ ဂၽြန္ေဟာ့ပ္ကင္းတကၠသိုလ္ မိန္႕ခြန္း (အျပည့္အစုံ)
=========================================There are many people in Myanmar who opposed the ongoing reforms as they see their interest being threatened, says President Thein Sein.

Ladies and Gentlemen,
It is a great pleasure for me to be here today and I am extremely grateful to Dean Vali Nasr for his kind invitation for me to speak at the Johns Hopkins School of Advanced International Studies as part of my first visit to Washington.
I know that the ties between Johns Hopkins and SAIS in particular with Myanmar are more than half a century old. The Hopkins Rangoon Center was established in 1954 as a leading educational and research institution in Asia and over the years dozens of Myanmar students have been educated at SAIS, including several current senior diplomats and a member of my own advisory council.

I hope very much that we will be able to reestablish the strong connections that once existed.

I am pleased to be here and I am especially pleased to be able to speak to you at this time on Myanmar’s transition, its vision of the future, and its vision for the future partnership with the United States and the American people.

The past two years under my government have been a time of transformation in Myanmar. Military rule was ended, a new constitutional was put into effect and we have begun a series of political and economic reforms that we hope will build a strong democracy and a strong market-oriented economy. At the same time we are working to peacefully end the armed conflicts that have plagued our nation since independence in 1948. And we are trying hard to end Myanmar’s isolation, see the removal of all sanctions, and make the contributions we can to both regional and global security and development.

I believe what we are trying to achieve in Myanmar is quite unprecedented. We are transitioning from an authoritarian regime to a democratic one and from a centralized economy to one based on a free market. At the same time, we are engaged in a political dialog process and national reconciliation. We are also reengaging with many governments and international institutions for the first time in decades, all under the burden of remaining economic sanctions.
END_OF_DOCUMENT_TOKEN_TO_BE_REPLACED

The All Burma Students Democratic Front (ABSDF)’s Northern Sector, based in Kachin Independence Organization (KIO)’s controlled area, is unable to participate in today’s negotiations between the ABSDF and the Union Peacemaking Work Committee (UPWC) in Rangoon, according to Maj Min Htay of the ABSDF Northern Sector. “We were told no travel arrangements will be made for us.” He questions the sincerity of the government

Myanmar authorities say they will arrange long-term housing in Rakhine State for Rakhine national ethnics who recently fled Bangladesh due to more and more use of violence against them by the Bengalis in the country.

They are now living in temporary camps in the state.

After the Rakhine conflicts, they came in groups into the state starting from October 2012 in fear of their lives as there were more violence against them who lived in Bangladesh.

There were more than a thousand people in 253 households from Rakhine ethnic groups such as Rakhine, Myo, Dainet, Marama and Thet who fled Bangladesh during the period from October 2012 to May 2013, according to Border Areas Immigration Supervisory Headquarters (BAISH).

“After the conflicts in Rakhine, Buddhist monasteries in Bangladesh were attacked and destroyed in last September. Since then, they came in flocks into the state. We arranged housing and food supplies for them as they arrived in Rakhine without anyone to depend on here. They fled in fears. They faced unfairness and land confiscations there before they fled. The Buddhist monasteries there were burnt down despite there were security forces standby. So most of the Rakhine ethnics who are minority in Muslim-dominated areas fled the country into here,” said Colonel Aung Naing Oo, who is in charge of BAISH.