NOT TRUE! BUT WHO WANTS ATTACK THE GROUP?

TRUE: FATHERLAND CONSTRUCTION go to 88 Office for open Islam temple at many city. They not agree and reject.

JOS, Nigeria (Morning Star News) – Gunmen believed to be members of the Islamic extremist Boko Haram group yesterday killed the Rev. Faye Pama Musa, secretary of the Borno state chapter of the Christian Association of Nigeria (CAN). He was 47.

The Rev. Faye Pama Musa, slain at his home by suspected Islamic extremists on Tuesday (May 14). (Photo courtesy of CAN)

The gunmen reportedly followed the long-time Christian leader from his church building, where he was holding an evening Bible study, to his house in the Government Reservation Area in Maiduguri, and shot him dead there, said the Rev. Titus Dama Pona, chairman of CAN’s Borno chapter.

“Rev. Faye Pama was killed last light,” Pona said this morning by phone from Maiduguri, the state capital. “I am right now with his family, and they are still consulting on what next to do.”

The assailants reportedly dragged the pastor from his home and shot him outside, in front of this daughter, who had followed them out pleading for his life. Pama was the father of three children.

Senior pastor of a Pentecostal church, Rhema Assembly, Pama often spoke out against persecution of Christians in Borno state, epicenter of Boko Haram attacks in northeastern Nigeria. He had been involved in ministry leadership for more than 26 years.  http://www.religiousfreedomcoalition.org/2013/05/16/suspected-boko-haram-gunmen-kill-christian-leader-in-borno-state-nigeria/

China-made MA 60 plane owned by Myanma Airways flying Yangon-Heho-Monghsat skidded while landing on the runway of Monghsat airport at about 11.50 am today.

The accident happened due to the brake failure. The plane skidded and stopped at a fence about 200 yards from the runway after losing control.
The left wing of the plane was damaged.

The plane carried 55 passengers and two women were injured in the accident.

The injured have been sent to a 100-bed military hospital in Monghsat.

“The aircraft had break failure while landing. The passengers are not seriously injured,” Than Tun, Managing Director of Myanmar Airways said.

Ministry of Transport, Directorate of Civil Aviation and officials from Myanma Airways formed the investigation tribunal to investigate the cause of accident and the members of the tribunal went to Monghsat this afternoon. 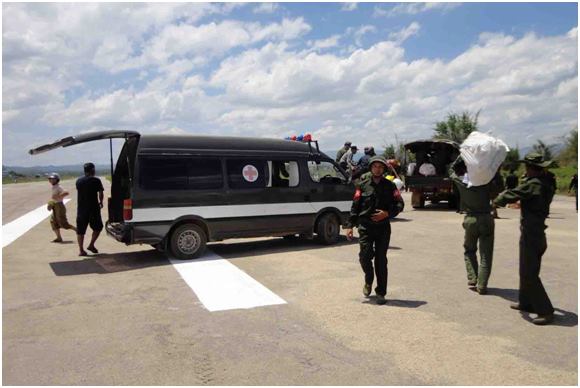 If they die Burmese Government will be accused from so called HRW and International Media, now you see the Truth