Burma’s government has rejected calls for an international inquiry into recent waves of anti-Muslim violence, following media reports that the world’s top Islamic body would request to send a delegation to the country to discuss the unrest.

“In my opinion, recent conflicts inside the country are [Burma’s] internal affairs,” government spokesman Ye Htut told The Irrawaddy on Thursday, adding that the government had not yet received a formal request for access from the Organization of Islamic Cooperation (OIC). 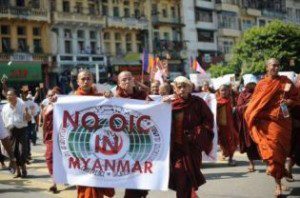 Ye Htut, who is also Burma’s deputy minister of information, said the government had taken good care to handle religious tension and violence against Muslims in the Buddhist-majority nation.

“So I believe there is no reason for an international organization to intervene,” he said.

The OIC has urged Burmese authorities to allow a ministerial delegation from the Islamic body to visit Burma and discuss ongoing religious tensions that have pitted Buddhists against Muslims there, AFP reported on Monday.

In a statement released after an OIC meeting in Saudi Arabia, the pan-Islamic body also urged the UN Human Rights Commission to undertake a fact-finding mission in the country related to the violence.

But Ye Htut said the OIC had not made any formal moves for access to Burma.

“We only know about the OIC’s decision at their meeting [to request access] from the international media,” he said. “They still haven’t sent us a formal request.”

He added that national, state and divisional governments were investigating the unrest and taking action against those who had broken the law.