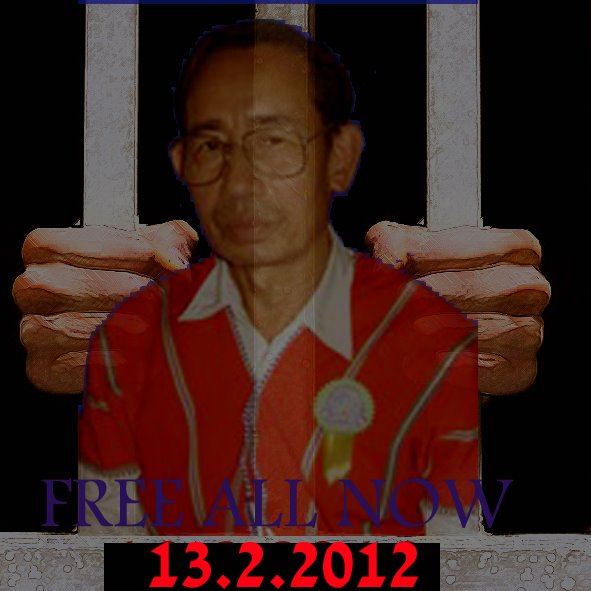 The lawyer of Karen National Union leader, U Kyi Myint, said he would defend all charges against Padoh Mahn Nyein Maung, who is now being held in Insein Prison.

The lawyer, U Kyi Myint told Karen News that he will try to find the way to defend the major charges keeping the KNU leader in jail.

“I will defend him in accordance to the law. He should not be punished for incorrect charges laid against him,” U Kyi Myint said after the last Padoh Mahn Nyein Maung court appearance on February 13.

Padoh Mahn Nyein Maung was charged with treason and having connections with illegal organizations – namely the KNU and other ethnic opposition groups. If he is found guilty of those charges, he will faces a possible death sentence or life imprisonment.

A member of the KNU ceasefire delegation who recently held official ‘peace talks’ with the Burma government said that Railways Minister, Aung Min promised at the meeting, on January 12th, that Padoh Mahn Nyein Maung would be released.

The Shan State Army (SSA) South that had signed the ceasefire agreement on 2December and the Burma Army are in a state of deadlock in Monghai, northwest of Tachilek, opposite Maesai, since last week, according to Lt-Col Gawn Zeun, Commander of the SSA’s Shan State East military region.

Both sides have been reinforcing and already 4 clashes have taken place since 6 February. The last one took place today.

“The Burma Army wants to push all our forces to the Thai-Burma border,” he said. “This is our land of birth. We cannot allow them to treat us this way.”

The SSA claims that according to the agreement reached with Naypyitaw’s negotiator U Aung Min, it will operate outside the main motorroads and major towns, where Burma Army units are based. The Burma Army however argues, according to the signed agreements, the SSA is entitled to operate freely only in the Homong-Mong Hta area, opposite Maehongson and Chiangmai provinces.

According to the 16 January agreement, Homong and Monghta subtownships are designated as seats of the SSA headquarters.

Meeting Sao Yawdserk, SSA leader, in Chiangmai on 5 February, U Aung Min said he knew the Homong-Monghta area was not big enough to accommodate both the SSA and the thousands of civilians taking refuge near its bases. Accordingly he was looking for a suitable location.

The SSA had requested that the resettlement area should be in Mongyawng township, as most of the areas along the Thai border have been occupied by the Wa people during the 1999-2001 forced relocations.

“Unless something’s done, the stand-off can escalate into a pitched battle,” concluded Gawn Zeun.

The SSA and Naypyitaw had earlier agreed to hold a third formal meeting but neither the date nor venue has been set.

Loi Taileng, the SSA HQ, meanwhile, has lodged a formal complaint to Naypyitaw, said Yawdserk. It also included the killing of one SSA officer and his wife on 17 February while they were shopping at a village market in the Kyaukme-Hsipaw area.