“The President of the Republic of the Union of Myanmar granted amnesty to 651 male and female prisoners who were serving their appropriate prison terms at respective jails in accordance with Section 401, Sub-section (1) of Code of Criminal Procedure as 5th Waning of Pyatho, 1373 Myanmar Era (13 January 2012) with the aim of ensuring stability and eternal peace of the State, fostering national reconciliations, enabling them to participate in the political process, and on humanitarian grounds and turning them into the citizens to participate through whatever way they can in the nation-building tasks by realizing the magnanimity of the State.”

It can be assumed that President himself decided to announce this amnesty order according to the Article No. 401(1) of the Code of Criminal Procedure in his own accord not concerning with the National Defence and Security Council. The Article says that “When any person has been sentenced to punishment for an offence, the President of the Union may at any time, without condition or upon any conditions which the person sentenced accepts, suspend the execution of his sentence or remit the whole or any part of the punishment to which he has been sentenced.” 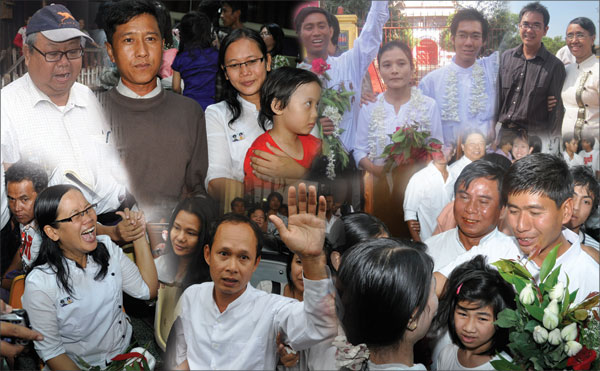 Captive Burmese soldiers with civilian suits, who were detained by the KIA in Mongkoe in Northern Shan State on Jan. 7, were released on Jan. 13.

Officials from the Kachin Independence Organization (KIO) claim the Burmese army has suffered numerous serious injuries since it launched an offensive against the KIO in June 2011.  According to the KIO, intercepts of army radio communication reveal a staggering number of fatally wounded soldiers on the part of the Tatmadaw (official name of the Burmese army).

Burma’s government and its state controlled press have yet to reveal any figures indicating the number of soldiers killed or injured during the 7-month long Kachin campaign.  The KIO however says the combined number of injured or killed could be as high as several thousand. END_OF_DOCUMENT_TOKEN_TO_BE_REPLACED

Shan State Army (SSA) South temporary base in Mongpulong, Mongpiang township, attacked by a patrol from Infantry Battalion 314 on 12 January, after an SSA fighter Sai Yawn was detained and forced to guide it to the base. No casualties reported and Sai Yawn was released later. Minister for Border Security Col Aung Thu later told SSA South it was a “misunderstanding”, according to SSA sources.(SHAN)