The Kachin Independence Army denied accusations made in Burma’s state run media that they had been involved in killing civilians.

Lan Nan, a senior spokesperson for the KIA spoke to Karen News.

“All statements made by the [Burma] government are totally false. The real culprit is the Burma Army who shelled from Khaung Phu village on the Irrawaddy River to Tar Law villages on the opposite side of the river.”

Articles in a state run newspaper accused the KIA of killing Daw Than Sint, 52, and wounding six on November 30th at Kyun Pin Thar section, Tar Law Village, Myitkyina township and a 40-year-old man killed on the 29th November.

La Nan also confirmed that the KIA did not targeted civilian areas and said the Burma Army Infantry Battalion 382 and 385, under the Military Operation Command 3, attacked civilians.

La Nan said the Burma Army shelling of civilians happened immediately after 14 of their soldiers killed were killed and another 20 wounded in a KIA ambush on the same day as the attacks on civilians.

A KIA source said the attacks on civilians mean have been revenge for the killing of Burma Army soldiers
State-run media have made similar accusations against the KIA before claiming that the KIA killed a ninth grade student and a 31-years-old man from Myitkyina.

Fighting between Kachin Independent Army (KIA) and Burmese Government Army has escalated in the past week as neither side seems to be shifting its stance. It is the fourth attempt by Burmese Army to annihilate KIA with more than 120 battalions. Though outnumbered, KIA has launched an effective defense and inflicted heavy casualties against Burmese Army attacks. Burmese Army soldiers meet fierce defense by KIA soldiers in all fronts opened for several major offensives. Burmese Army has transported a number of battalions from lower Burma and other states to replace fallen ones but the morale is low and the number of deserters is reportedly high among Burmese Army soldiers, said a frontline source.

KIA soldiers of 3rd Battalions have fiercely fought against Magwe-based Burmese Army soldiers under 88th LID on December 6, 2011 at around 8 am. The fighting took place between Sampai and Washawng on Laiza-Waing Maw- Kanpaiti road. Burmese Army continuously shelled the areas with heavy artillery. But KIA frontline sources said that they inflicted heavy casualties on Burmese Army. About 30 Burmese soldiers were wounded and some were killed in this battle, said source.

highway leading from the township to Thanphyuzayart has been closed since the beginning of the rainy season. Each year the road becomes unusable as many sections are engulfed by floodwaters.

Of the three main routes that allow residents to travel from TPP to Thanphyuzayart, the direct highway is the safest and shortest route. The most commonly used alternate route, from TPP to Ye Township, is very hazardous and a lot of accidents occur along the windy and perilous road.

“(KNU) started to collect tax from car owners today, who will run the highway TPP to Thanphyuzayart” said one car driver hoping to depart from TPP.

“We have paid the tax today and we can travel tomorrow” said another driver waiting in TPP.

Along the highway to Thanphyuzayart, which comprises approximately 60 miles of the total 70-mile journey from TPP, there are a reported 33 checkpoints along the road. In addition to the initial taxes paid by residents in TPP, each checkpoint requires a payment of varying degrees. The checkpoints are controlled by the KNU, the Democratic Karen Buddhist Army (DKBA), by Burmese government troops and by the New Mon State Party (NMSP).

On January the 28th this year, the KNLA demanded that TPP residents pay approximately 2.5 million baht collectively. This is again an increase from the 700,000 baht estimated to have been collected in 2010.

The TPP Township Peace and Development Council (TPDC) have claimed that the KNLA threatened the TPDC with destruction in the local area if the taxes were not raised and handed over. The township has seen an increase in conflict since the KNLA moved into the area, and conflict has even occurred in the town centre, a new and disturbing phenomenon.

Last year the KNLA Brigade no. 6 blocked the highway so as to disrupt the movement of government troops and food supplies in the area. This year’s cool season is the first major opportunity for residents to utilize the road for trade since 2010, despite the trip being stalled continuously by checkpoints and taxes.

The meeting shall examine the report of the negotiation team that has returned to Loi Taileng, the main base of the organization, following its signing of the initial ceasefire agreement on 2 December in the Shan State capital, Taunggyi. It will also  future negotiations at the Union level and a review of its future plans. “A press release will be issued on 9 December,” said RCSS chairman Yawdserk. “A press conference is also being planned.”

Fighting between the two sides ceased since yesterday afternoon, 4-days after the signing. “The Burmese side had issued an order to its units to observe the ceasefire on 3 December,” he explained. “But we received a copy of it only yesterday. We have accordingly issued our own directive to our units to adhere to the 2 December agreement.”

A Burmese soldier from Mongton-based Infantry Battalion 133, opposite Chiangmai, was killed during a clash around 12:30, according to local sources. “It must have taken place just before the ceasefire order was out,” said one.

According to the 8 point agreement signed in Taunggyi, Mongton, 53 miles (85 km) north of Chiangmai border, is one of the 5 towns where the SSA will be setting up its liaison offices. Its 727th Brigade, commanded by Lt-Col Teun Kherh, is active in the area. END_OF_DOCUMENT_TOKEN_TO_BE_REPLACED 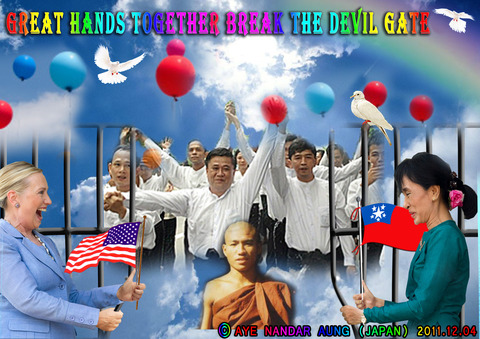