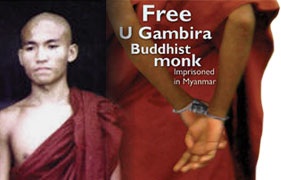 New Delhi (Mizzima) – The Burmese Buddhist monk activist Ashin Gambira’s sister says a prison doctor said he should live with his family because of his mental health problems.

Recently, the monk, who was a leader in the 2007 “Saffron Revolution,” was transferred from Kalay Prison to Myaungmya Prison.

The prison doctor said that if the authorities continue to detain Ashin Gambira, his state of mind would be difficult to return to a healthy condition, according to his sister, Khin Htay, who visited the prison on Monday.

Meanwhile, Gambira’s family said they believe that he has suffered mental problems because he was tortured in prison.

“Both hands and ankles of prisoners are bound for a month and they have to empty their bodies of urine or excrement on a chair,” said Khin Thu Htay. “They had to wear black hoods and were beaten. They have had too much physical pain. When they had pain, they were injected with sleeping medicine, according to former prisoners,” she said.

Khin Thu Htay said that the family would send an appeal letter to President Thein Sein to release the monk because of his health condition.

On November 16, he was sent from Kalay Prison in Sagaing Region to Insein Prison in Rangoon and the next day he was transferred to Myaungmya Prison in Irrawaddy Region. Gambira was 29 when he headed the monk-led protest popularly known as the “Saffron Revolution” in September 2007 while he was pursuing Buddhist studies. He was arrested by the authorities and charged with 13 acts including the Electronics Act and sentenced to 63 years in prison in December 2008.