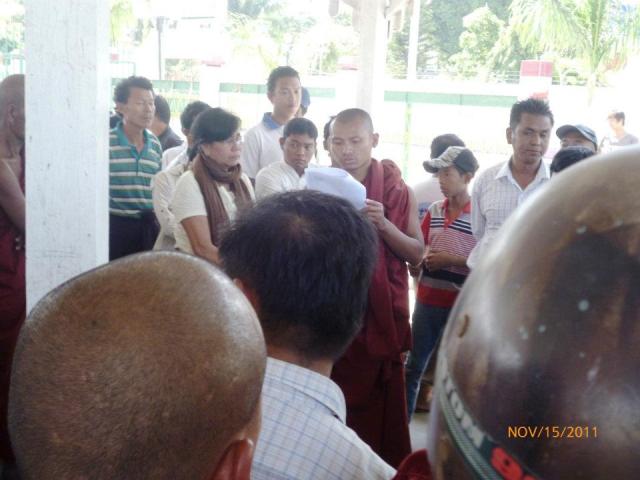 Chiang Mai (Mizzima) – Five Burmese Buddhist monks have launched a protest in support of political prisoners by locking themselves in a religious hall in Maha Myatmuni Pagoda compound in Maha Aungmyay in Mandalay in central Burma.

Burmese monks in Mandalay lift supplies from outside after they locked themselves inside a religious building to protest for the release of all political prisoners on Tuesday, November 15, 2011. Five monks confined themselves inside the building and also called for a stop to internal fighting and for freedom of speech. It’s the first time monks took to protests in Mandalay since a new government was elected. Photo: AFP

Banners saying “Release Political Prisoners Immediately,” “Stop the Civil War” and “Give Us Freedom” are hanging on the outside wall of the hall, said an eyewitness.

Eyewitness said that there might be five monks inside the compound.  Authorities are on the scene and negotiations are underway, they said.

An eyewitness said monks claimed they would not leave the building unless their demands are met. The city’s influential senior monks from Masoeyein Monastery and the Sangha organization are negotiating with the protestors.

“They secured the veranda space by locking the door. It is five feet wide and about 30 feet long. The hall is located at the northeast corner of the (Maha Myatmuni) pagoda,” an eyewitness told Mizzima by phone.

“So far, security is normal. There are about 500 spectators,” he said.

Monks who are politically active have been a source of concern for the Burmese government. About 200 people including activist Burmese monks gathered in Chiang Mai in September for a candle-lit peace walk and rally to mark the 4th anniversary of Burma’s “Saffron Revolution.” The peace walk and Buddhist prayer service was led by three Buddhist monks including Ashin Issariya, who was a key organizer in the 2007 uprising.

The event was held in remembrance of the hundreds of thousands of demonstrators, led by thousands of Buddhist monks who marched down streets in cities and towns across the country in an attempt to depose the military junta.

Ashin Issariya (also known as King Zero), who led the peace walk and gave a speech at the rally, toldMizzima, “Yes, I would like to see another peaceful uprising of the people in Burma. We must not forget the ‘Saffron Revolution.’ Until political prisoners who are in jail are released and the human rights abuses committed by the regime are stopped, the people will not be satisfied.”

The civil unrest in 2007 was sparked by the junta’s decision to remove fuel subsidies without warning, causing fuel prices to soar overnight. The protests peaked on September 24 when up to 100,000 people marched in Rangoon, the largest anti-government protests since the pro-democracy protests in August 1988. END_OF_DOCUMENT_TOKEN_TO_BE_REPLACED