Stop fighting only in our RCSS controlled areas, but continue in SSPP’s areas is cannot be accepted, Yawdserk said.

Now both RCSS and SSPP are preparing to meet Burma movement for peace talks.

The core of its planned proposition would be “political problems should be resolved by political means. But before holding political talks, fighting must be stop first.

“As we had declared in May there is only one SSA. Therefore, if RCSS negotiates with the Burma government it means it is representing the SSPP. We both represent each other,” he said.

He however conceded that when it came to political negotiations, the two might choose to negotiate separately, as the SSA North is part of the 12 member alliance known as the United Nationalities Federal Council (UNFC).

Rai Maroah – Six Burmese battalions under the control of Tenasserim Coastal Region Command are extending their area along the Tavoy-Kanchanaburi highway near the site of the Tavoy Deep Sea Port project.

An information officer from Brigade No. 4 of the Karen National Union (KNU) in Tavoy District said about nine battalions, including the newly-arrived battalions, have been in the area since the second week of this month, and the local battalions are moving along the site of the construction project.

“The Burmese troops are extending. Local residents have run to the border from fear at the battalions’ arrival”, said the officer.

The government battalions are attempting to secure a wider area around the project site after the KNU banned the construction of the Tavoy-Kanchanaburi highway near the construction project. END_OF_DOCUMENT_TOKEN_TO_BE_REPLACED

A civilian fighter of Kachin People’s Army under KIA.

At least 23 government soldiers were killed and more than 22 were injured during fighting in three different locations on Thursday, in Kachin State, said witnesses.

Sixteen were killed and more than 22 injured during an ambush by the Kachin People’s Army Thursday afternoon in southern Kachin State, local people said.

A government military column was ambushed near Ja Ing Yang, on the road to Sinbo, according to local witnesses.

It was largest loss of Burmese troops this week in that area, said local people.

The ambush was carried out by civilian fighters under the Kachin Independence Army, KIA officers at the Laiza headquarters confirmed.

Three Burmese soldiers from the Sarhmaw-based Infantry Battalion No. 105, from the Kai Htik Post on the Manmaw (Bhamo)-Kai Htik-Nam Hkam Road were killed in the quick attack by the KIA’s Battalion 1, said witnesses.

Burmese soldiers responded by firing mortars at the KIA for an hour. A Kachin soldier received minor injuries, according to a KIA officer.

Four Burmese soldiers from the Dawhpumyang-based Infantry Battalion No. 142 were ambushed and killed by KIA troops from Battalion 24, when government troops tried to transport rations to the frontline near Dawhpunyang, from Num Lang Village, said witnesses.

According to KIA officers, over 6,000 government troops are now deployed around the headquarters but cannot overrun Laiza because of KIA resistance. kng news 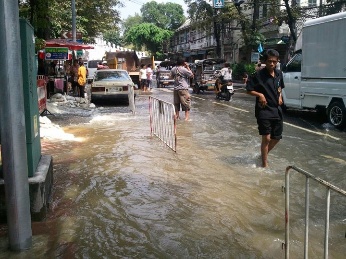 The Chao Phraya River’s water level remains worrisome, as the water has now already reached the homes of riverside communities and inundated the front area of the Supreme Court building.

Rising sea water pushed the river’s water level to rise abnormally up to 30 cm, disrupting traffic routes around the Sanam Luang area. Officials rushed frantically to quickly drain water within the Phra Kaeo Temple by deploying large water pumps to clear out water pooled up in this important landmark while military personnel are constantly monitoring the scene.

Meanwhile, the flood wall at Phra A-Thit road near the ASTV television broadcasting station has been breached, causing water to gush through and inundate the entire road. Officials were forced to close all traffic routes between the Pipop Leela and Bang Lamphu junctions respectively, as the water level rose to a foreboding 70 cm. As of now, only military vehicles can pass through to assist troubled residents.

Deputy chief of the BMA drainage department sees high possibility for all districts on the city’s Thonburi side to be flooded in 3 days. 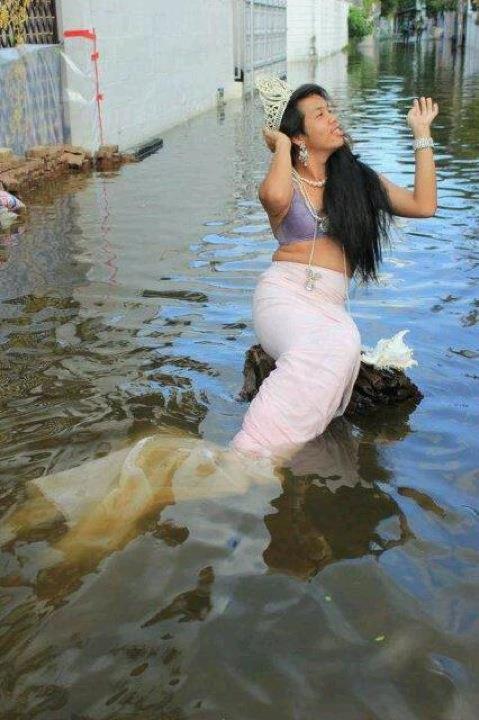 Police in Myanmar yesterday broke up a demonstration of around 100 farmers protesting against the confiscation of their land, detaining seven people for questioning, officials said.

The visit by Burma’s foreign minister to Japan this week, the first by such a senior official in 16 years, is an opportunity for Tokyo to put the long and vexed relationship between the two countries on the right track. Bureaucrats and corporations will be urging the Japanese government to increase overseas development assistance and investments in Burma’s emerging markets, especially the lucrative natural resources sector. Their argument will be that aid and trade coupled with quiet diplomacy is the best approach to encouraging reform in long isolated, repressive Burma.

This is not the approach Japan should take. It has been Tokyo’s policy toward Burma for decades, and it has not worked. Burma’s government is engaging in a sophisticated campaign to convince the world that is in transition from a military regime to a more open society. Japan should try to capitalize on its recent promises by pressing for genuine human rights reforms.

Burma’s government, formed on March 30 and consisting mainly of former military officials, has promised economic, political and legislative reforms. It has softened its rhetoric by using language on human rights and democracy, met with the democracy leader Aung San Suu Kyi, and loosened some restrictions on the media. President Thein Sein, a former general, has called on exiled dissidents to return. Crucial by-elections are slated for the end of 2011. There has been increased pressure on the government to allow the opposition National League for Democracy (NLD) to register and possibly to offer candidates in the elections, though no decision has been made.

The suspension of a massive Chinese-financed hydro-electric dam in Kachin State on September 30 was another surprise gesture. However, the controversy around the dam should send important warning signs to Japan that investment in natural resource extraction in Burma without significant human rights reforms could fuel abuses, destabilize the environment, and facilitate corruption. END_OF_DOCUMENT_TOKEN_TO_BE_REPLACED

Burma’s independence day in January next year will be marked with the launch of a film festival organised by two of the country’s leading pro-democracy luminaries, opposition leader Aung San Suu Kyi and comedian Zarganar.

Billed as the Art of Freedom Film Festival, it will open on 31 December and showcase both short films and documentaries. Suu Kyi is due to present awards to the festival’s winners on Independence Day on 4 January.

“The main theme is the idea that art can be created only when there is freedom, and film makers are to define freedom in their piece in whichever way they see it,” Zarganar, who was recently released from prison, told DVB.

He added that a number of entries were also likely to focus on the day Burma achieved independence after nearly a century of British rule. “Our main focus is about freedom and it doesn’t matter if they talk about history or not,” he said.

Also helping to organise the festival is former award-winning Burmese actor and director Kyaw Thu, whom since being banished from the film world has headed the highly-praised Free Funeral Service Society. The three will be joined by fellow film director Min Htin Ko Ko Gyi.

Zarganar, who served three years of a 35-year sentence after criticising the Burmese government’s woeful response to Cyclone Nargis in 2008, said he will be entering his own film focusing on the life of Thiri Thudhamma Khin Kyi, the wife of Burmese independence hero General Aung San and mother of Suu Kyi.

Suu Kyi herself is the subject of French director Luc Besson’s latest offering, The Lady, which stars Michelle Yeoh and which yesterday opened the Rome film festival.