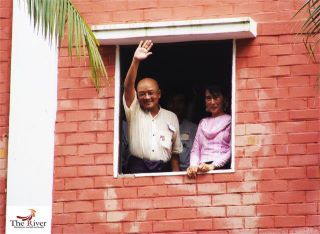 Burmese pro-democracy leader Aung San Suu Kyi also attended the event and made a speech in support of Min Ko Naing. The Nobel Peace Laureate said those that strive towards achieving others’ freedom should think about themselves first, feel free and work for others.

Min Ko Naing, a former zoology student from Rangoon Arts and Science University, started getting involved in politics through the traditional Than Gyat competition. Held during the annual water festival, these performances have sketched and satirized the government since 1985 with Min Ko Naing’s “goat mouth and spirit eye” act remaining famous.

During the 1988 uprising, Min Ko Naing resurrected the All Burma Federation of Students Union (ABFSU) and became group chairman. The orignal ABFSU was forced underground in the wake of the 1962 coup by General Ne Win when student protests were violently crushed, but returned to prominence thanks to Min Ko Naing.

Min Ko Naing was arrested with other students later in 1988 and was sentenced to 20 years in prison for violating part 5(j) of the 1950 Emergency Provisions Act by “starting disturbances to the detriment of law and order, peace and tranquility.” His prison term was reduced to 10 years through the general amnesty in January 1993, and he was released on Nov. 19, 2004.

His second arrested was in September 2006 along with other 88 Generation Students’ leaders including Ko Ko Gyi, Htay Kywe, Pyone Cho and Min Zeya, but they were released in January 2007.

That same year, Min Ko Naing and 13 other 88 Generation Students’ leaders were arrested for organizing a peaceful demonstration. Min Ko Naing was sentenced to 65 years imprisonment in November 2008. From 1989 to 2011, Min Ko Naing has spent just two years outside prison.

Kyi Kyi Nyunt, one of Min Ko Naing’s sisters, told The Irrawaddy that her family appreciate all those people who love and pray for him. She also said that they pray for the release of all political prisoners including Min Ko Naing.

Min Ko Naing currently suffers from osteoporosis and other illnesses as a result of his brutal interrogation, with his condition deteriorating still further during harsh weather.

Felicitation letters from ABFSU and the 88 Generation Students were also read at the birthday event, and the Assistance Association for Political Prisoners released a statement that said Min Ko Naing will spend his birthday behind bars maintaining his strong convictions.

Around 200 political prisoners were released as part of an amnesty for 6,359 prisoners announced by President Thein Sein on Oct. 11, but many 88 Generation Students’ leaders, activists and ethnic leaders remain in jail.