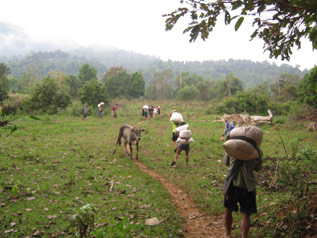 The two armed groups that had been at loggerheads with Burma Army over Naypyitaw’s Border Guard Force (BGF) program launched in 2009, United Wa State Army (UWSA) and National Democratic Alliance Army (NDAA) reportedly signed a new ceasefire agreement with the new civilianized government, according to highly-placed sources on the Sino-Burma border.

“The proposal looks fine, so we have signed it. Essentially, it is like the agreement we concluded in 1989,” said an officer from Mongla who was also in the recent meeting with the regime negotiators.

The said proposal was presented when the two sides [armed groups and government’s negotiators] met in Kengtung, Shan State East capital following the government’s invitation letter to the groups [Mongla and UWSA] for peace talks. However the groups were invited to meet separately. END_OF_DOCUMENT_TOKEN_TO_BE_REPLACED

Government officials and police yesterday disrupted a human rights training session provided by the Cambodian Center for Human Rights (CCHR) and the Natural Resource Protection Group (NRPG), and threatened to arrest the organisers. The training was organised for communities affected by the clearing of Prey Lang forest. This is the second time within a month that human rights training events organised by CCHR and NRGP have been disrupted by the authorities. The allegations and threats against CCHR and NRGP is the latest development in an ongoing crackdown on civil society groups in Cambodia.

Officials and police armed with AK‐47 guns arrived yesterday morning (7 Sept 2011) at the training venue in Mean Rith commune, Sandan district, in Kampong Thom Province. They accused the organisers of not providing adequate notice of the event and threatened to arrest them if they proceeded with the training.

According to the Cambodian Law on Peaceful Demonstrations, no notice is required for “education dissemination activities” which include training. Although no arrests were made, the police photographed all the participants, organisers and observers of the training. The deputy governor of Sandan district, Div Hok, also demanded that the organisers hand over the identity cards of all participants and observers, but this was denied. After a two hour stand-off between the authorities and the organisers, the training was eventually allowed to take place by the Sandan district council.

“The harassment of human right defenders that took place yesterday is yet another example of the Cambodian government’s attempt to curtail the activities of civil society, freedom of speech and peaceful political opposition.Communities affected by forest clearing and land disputes should be able to know their rights and have full access to the information that will affect their lives,” said Dr. Agnes Callamard, ARTICLE 19’s Executive Director.

Yesterday’s incident follows a news report in The Cambodia Daily on 6 Sept 2011,  in which the police chief of Kampong Thom province, Phan Sopheng, was quoted accusing CCHR and NRPG of inciting citizens to oppose land concessions, by providing human rights training to affected communities in Dang Kambith on 9-10 Aug 2011. Sopheng threatened to suspend both organisations should they continue to conduct further training. The permission to use a venue for a training event scheduled on 8 Sept 2011 was also withdrawn following pressure from the authorities. END_OF_DOCUMENT_TOKEN_TO_BE_REPLACED 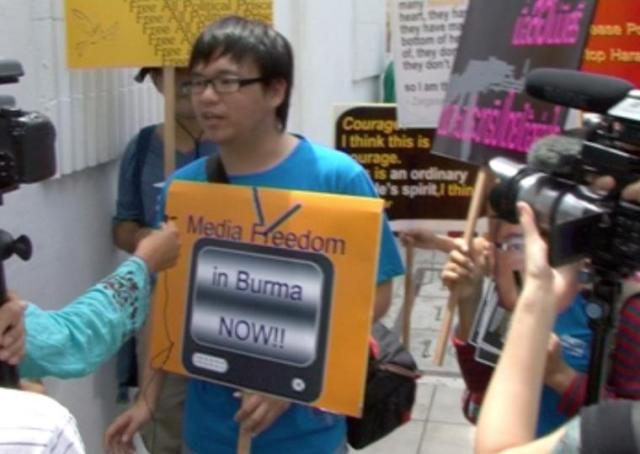 The Free Burma VJ campaign on 9 September protested in front of the Burmese embassy in Bangkok to call for the release of jailed Democratic Voice of Burma (DVB) video-journalist (VJ), Hla Hla Win.

Hla Hla Win turned 27 on 29 August. She was first arrested in September 2009, just after the anniversary of the 2007 monk-led uprising, and was sentenced to 27 years in jail. The arrest took place as she was returning from a DVB reporting assignment in Pakokku township, Magwe division, where she had conducted interviews with Buddhist monks in a local monastery.