As ASEAN leaders meet for the 18th ASEAN Summit inJakarta, Indonesia, the Save the Mekong coalition calls on ASEAN leaders to act immediately to cancel the Xayaburi Dam in Lao PDR. The call is made in close cooperation with the ASEAN Civil Society Conference (ACSC)/ASEAN People’s Forum (APF) 2011 held from 2-5 May, where 1,300 people have gathered in Jakarta, Indonesia.

The Save the Mekong coalition and its alliances have called on the Government of Lao PDR to immediately halt construction activity at the dam site and for the Government of Thailand to cancel its plans to purchase the dam’s electricity. This call has received strong support from many civil society organizations at the ACSC/APF 2011 who have also been demanding since 2009 that ASEAN adopt a Fourth Pillar on the Environment.

Two weeks ago, the inter-governmental Mekong River Commission (MRC) helda Special Joint Committee meeting to decide whether to approve theproposed Xayaburi Dam, located on the Mekong River’s mainstream in Northern Lao PDR. At the meeting, whilst Lao PDR proposed to proceed with the dam, Thailand, Cambodia and Vietnam called for an extension to the decision-making process citing concerns about transboundary impacts and knowledge gaps that require further study and public consultation. The four governments agreed to defer the decision to a future Ministerial-level meeting. Yet, the Save the Mekong coalition fears that the project is in fact continuing to move forward given a recent investigative report by the Bangkok Post on 17 April, which revealed that preliminary construction work had already started at the dam site and the process for further regional discussion remains unclear.

Joining a public hearing on Corporate Social Responsibility and ASEAN organized at the ACSC/APF 2011 on 2 May, Sodsai Sangsok of Thailand’s Northeastern Environmental Network stated to the public forum that “ASEAN’s Human Rights Mechanism should acknowledge the fact that the Xayaburi Dam is the main threat to the livelihoods of Mekong people, and take action upon it.”

Furthermore, at a forum at the ACSC/APF 2011 on the ASEAN experience ofprotecting rivers and people’s livelihoods, Nguy Thi Khanh, the Coordinator of the Vietnam Rivers Network stated “The Mekong mainstream should never be used as a test case for proving and improving large dam hydropower technologies. Rather, ASEAN should play a role in facilitating development partners to promote alternative solutions for the region’s water and energy needs, thus helping to ensure sustainable development and the prosperity of the region.”

Another key issue discussed at the ACSC/APF 2011 was the need to reviewnational power development plans and strategies, especially the proposedASEAN Power Grid. ACSC/APF 2011 participants suggested that the ASEAN Power Grid plan should focus on the sustainability of ASEAN states and ASEAN as a whole, rather than only serving the private sector’s benefit.

Many groups from around the Mekong region have called for the Xayaburi Dam to be cancelled and for ASEAN to play more of a role in resolving differences between Mekong countries. END_OF_DOCUMENT_TOKEN_TO_BE_REPLACED

TUESDAY, 10 MAY 2011 15:52 HSENG KHIO FAH
Thai-Burma Relations
A Thai coal mining company, Saraburi, a subsidiary of Ital-Thai that was granted a 30 year coal concession in Shan State East’s Mongkok sub-township, Monghsat township, 70km north of Thailand’s Chiangrai border, told a meeting held in Chiangrai province yesterday that it was considering passing on its coal products to China if people in Thailand continued opposing the project, according to Thailand’s Manager Online.Thai officials together with the company held the meeting on at Mae Sai’s custom department building over the company’s plan to transport coal shipments from the Mongkok mine through conflict zones inside Shan State and through unaffected areas in northern Thailand to the city of Saraburi in central Thailand where it will be used as fuel in cement factories.The Burma Army had made a condition for Saraburi to construct a new route across the border despite the existence of a shorter 70-80 km route inside Burma’s Tachilek to Thailand’s Maesai, in exchange for the coal concession. END_OF_DOCUMENT_TOKEN_TO_BE_REPLACED 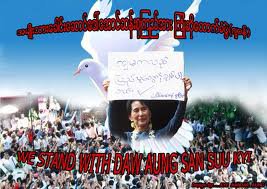 “There have been many words supporting democracy, and we are duly grateful for them, because we do not underestimate the power of words. But words need to be backed up by action — by action that is united and that is focused on essentials. Only by such action will we be able to realize our democratic aspirations”. (Aung San Suu Kyi)

2: The results of the 1990 General Elections must be implemented

“That the results of the 1990 General Elections must be implemented is a resolution already taken by the United Nations. We already know that the General Assembly of the United Nations has accepted the notion that the will of the people has been expressed in the 1990 General Elections. This is something we can not abandon. It will be to the detriment of our country if after an election has been held the results are not honoured and we do not resist attempts to trivialise it.”

“United Nations in Burma, as elsewhere, is to promote the articles of the United Nations Declaration of Human Rights and, through establishing the universality of human rights, to bring peace to the world.”

Here is what I want most for my people: I want the security of genuine freedom and the freedom of genuine security. I would like to see the crippling fetters of fear removed, that the people of Burma may be able to hold their heads high as free human beings. I would like to see them striving in unity and joy to build a safer, happier society for us all.  END_OF_DOCUMENT_TOKEN_TO_BE_REPLACED

10 May 2011
A business woman, Ma Ngwe, over 40, shot to death by unknown gunman, at 19:00, 6 May, at her home quarters in Maekhao, Tachilek City. She was a well known “mamasan” and reputed to be a go-between between “Golden Triangle Godfather” Naw Kham and the local police force. (SHAN)

10 May 2011
A tolaji (farm tractor) commandeered by Light Infantry Battalion 422 commander and troops ambushed by Shan State Army (SSA) “South” in Hsadaw tract, Mongkeung township yesterday evening, 16:30-17:00. 11 killed, including the civilian driver, and 8 wounded, according to Thai-Burma border security source. No confirmation or denial by the SSA. (SHAN)