Pro-democracy leader Aung San Suu Kyi has bid farewell to her younger son, who visited his mother for the first time in a decade after her recent release from house arrest.

The 65-year-old Nobel Peace Prize laureate accompanied her son, Kim Aris, to Yangon’s International Airport where he was scheduled to fly to neighboring Bangkok.

The England-based Aris, 33, was on the same flight with Malaysian actress Michelle Yeoh, who spent all day Monday with Suu Kyi as part of research for an upcoming film in which she will play the democracy leader, according to Suu Kyi’s lawyer Nyan Win.

Suu Kyi was released Nov. 13 after more than seven years under house arrest. 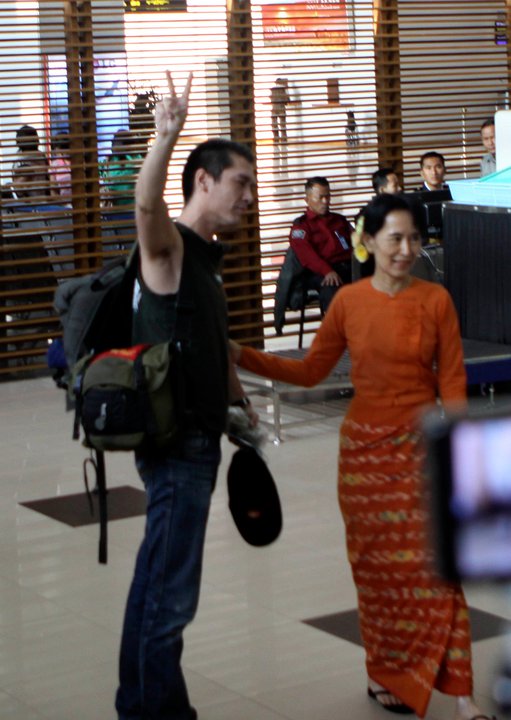 Burma’s foreign minister Nyan Win yesterday travelled to the border town of Tachilek to meet with his Thai counterpart in what observers claim may be an attempt to negotiate the re-opening of a key border crossing further south.

The three-hour meeting was held Monday morning at the Regina Hotel in Tachilek, which also acts a major trading point between the two countries, although it was the issue of the closed Friendship Bridge in Mae Sot that likely topped the agenda.

A Thai journalist from Channel 3 followed the Thai team to the airport in nearby Chiang Rai, but Kasit reportedly refused to answer his questions.

The closure of the Mae Sot crossing by Burmese authorities in July has angered Thailand. Burma officially claims the decision was made over safety concerns for tourists in its border town of Myawaddy, while it is thought the real reason lies behind Thailand’s construction of a defensive wall on its side of the Salween river.

Thailand’s countrywide border trade generates around US$4.3 billion each year for the developing economy. According to TTR Weekly, Thailand is losing an estimated US$2.7 million day while the Mae Sot crossing is closed.

Bangkok has also earmarked around $US38.6 million to develop a special economic zone in the Mae Sot-Myawaddy region, although it is unclear whether the latest dispute will have any impact on this.

He said, “We received a donation worth 3.9 million kyat from Daw Aung San Suu Kyi on 24 November. We went to Arakan State on 27 November and distributed the donations in Mray Bon and Pauktaw Townships between 30 November and 2 December.”

The committee distributed the donations to six of the worst-hit villages in Mray Bon and Pauktaw Townships.

“We donated 5,000 kyat and 10 kilograms of rice to each family in six villages in the two townships. They were very happy when they knew the donation was from Daw Aung San Suu Kyi. They felt themselves that Daw Aung Suu Kyi did not neglect the cyclone-affected people in Arakan,” he added.  END_OF_DOCUMENT_TOKEN_TO_BE_REPLACED

The Burmese military has ordered Karenni people to chop 200 bamboos for the military camp on the early of December in Deemawso Township, the resident said.

Karenni villagers from Loilay, Loikaw Township chop woods and carry with oxcart to the LIB 530 this year

The official date ordered the Karenni people end on December 1 and 2, according to a senior Shan officer who requested anonymity.

Residents in Deemawso speculated that the Burmese junta was beefing up their camp security to the fear of attacking by the Karenni Army, while villagers are ordered chopping bamboos and bringing to the military camp by themselves.

Meanwhile, the Burmese junta reportedly forced residents to work on a fence projects and rebuild camp when the absence villagers are threaten to be punished.

Burma Nine, a spoken person of Karenni Social Development Centre (KSWDC), said “If villagers are providing late in the deadline of imposed to chop bamboos, they will be ordered twice a previous one. If not, they have to feeds the Burmese troops such as giving rice, pets and foods.”

A villager elder said that in some areas, one man from household has required to chop woods, while also supplying water.

TAK, 7 December 2010 (NNT) – As the fight between the Burmese troops and Karen minority groups along the Thai-Myanmar border has intensified, another 500 Burmese have crossed over to Thailand to seek shelter.

Over 500 Burmese refugees have fled into Thailand after the fighting between Burmese soldiers and the Democratic Karen Buddhist Army (DKBA) flared up again. Refugees are now taking shelter in Pob Phra district in Tak Province away from the site of the clash. Locals who live along the border have also moved to other villages for safety.

Those fleeing the clash are now under the care of officials and non-governmental organizations (NGO’s) who have been providing them with food, water, and medicine. Altogether over 1,000 Burmese have so far crossed over the border into Thailand to seek refuge.

The fight shows no sign of abating and is expected to drag on for a while, according to the Tak Governor, adding that he will not repatriate any Burmese to their homeland until the situation has returned to normal.