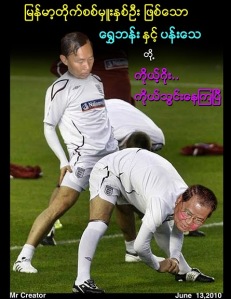 Political parties planning to compete in Shan State South, where most of the countryside is under the anti-Naypyitaw Shan State Army (SSA) ‘South’’s control, are reportedly feeling nervous about campaigning in the areas after hearing the group’s statement that it was against any party set up to contest in the elections planned by Naypyitaw, according to sources close to a party in Shan State South.

“Every party including the Shan party is concerned about the SSA’s possible reaction,” said a member of Shan Nationalities Democratic Party (SNDP) who requested anonymity. “They are afraid to campaign not only in the outskirts but even downtown,” he said.

On 26 May, the Restoration Council of Shan State (RCSS), the political wing of the SSA South, announced that it would not “support and recognize” the upcoming 2010 elections and it is also against new parties being set up to contest the elections.

Due to the announcement, there have not been many reports of campaigns in Shan State South up to this day, the source added.

The SNDP has declared it will not contest in areas designated by the 2008 constitution as self-administered zones/region of Danu, Kokang, Pa-O, Palaung and Wa. They are:

At present, the SNDP has over 1,000 members from across the country, according to a source close to members in Shan State North’s Muse Township.

The party has been campaigning in other townships of states and regions that it is planning to contest since it was granted permission by the Elections Commission on 26 May.

One of the party members in Muse said, “The SNDP believes that to build a genuine democracy, there must be principles that guarantee equality, freedom, justice and non-discrimination.”

The party’s objectives are: 1) To build a genuine democracy by peaceful means 2) To build unity among ethnic nationalities 3) To guarantee equal basic human rights 4)To develop every ethnic nationality’s literature and culture 5)To work for realistic goals 6) To focus on common interests 7) To keep the party’s goals and programs flexible
shanland.org

Chiang Mai (Mizzima) – Burma’s ruling military junta has issued petrol-station permits to the sons of Senior General Than Shwe and General Thura Shwe Mann, and junta cronies, according to an Energy Ministry report.

Myanmar Naing Group, owned by Than Shwe’s son Tun Naing Shwe, has obtained permission to run a total of six petrol stations in Rangoon and Mandalay divisions, and in Shan State, a Ministry of Energy report received by Mizzima reveals.

Tun Naing Shwe’s company also operating jade-mining business in Pharkant in Kachin State, in the country’s north. He holds the controlling share of J-Donut outlet in Rangoon, a retail pastry shop styled on Dunkin’ Donuts and frequented by the children of Burma’s corrupt elite.

Since Burma’s oil sector was privatised on May 15, Ayar Shwewa/Shwe Yamone and Zaygabar, linked to sons of military chief of staff, Thura Shwe Mann – Aung Thet Mann and Toe Naing Mann – were given permission to open private petrol stations. The former company was licensed to run 12 stations, the latter, two.

The application for Zaygabar’s license to run the two stations is under Toe Naing Mann’s despite the company being owned by his father-in-law, Khin Shwe.

Concessions to the likely lucrative petrol-station business went to junta nationalist social organisation, the Union Solidarity and Development Association, and Myanmar Economic Holdings – a company that feeds income to the junta – which received 15 and 14 stations respectively.

Rangoon (Mizzima) – A fire broke out in Hall No. (1) of Myanmar Info Tech in Hlaing Township, Rangoon, on Tuesday morning, a fire brigade official said.

The fire started at 8:50 a.m. and was extinguished by 9:20 a.m. Furniture such as sofa sets and plywood furniture were destroyed.

The fire in the two-storey building started among the dumped old and damaged settees kept in the corner of the staircase leading to the upper floor, said a fire brigade personnel from the Hlaing Township Fire Department.

In a new investigative documentary produced by DVB, we have discovered that Burma’s ruling generals have started a programme to build nuclear weapons. It has long been suspected that Burma has been pursuing a nuclear programme but now, for the first time,DVB provides evidence of how, where and why they are pursuing this goal.