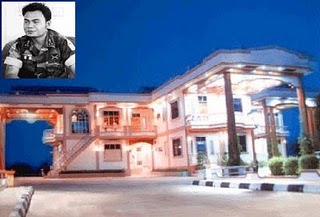 “The invited monks preached sermons at 4 a.m. on March 24th. During the next three evenings, two Karen singers and two Burmese singers took turns signing.”, an officer from the 999th Brigade told Mizzima.

The officer, who wished to remain anonymous, estimated the total cost of the lavish ceremony at Ks. 100 million (approximately US $100,000).

The celebration of Col. Saw Chit Thu’s wealth and power was attended by local residents from Myawaddy and Burmese citizens from the nearby Thai border town of Mae Sot.

The DKBA has 3 brigades, 333, 555 and 999. Col Chit Thu, while not the DKBA’s most senior leader is believed to be the richest and most powerful member of the organization.

The DKBA originally formed as a junta supported breakaway faction that separated from the Karen National Union (KNU) in 1994. After signing an initial cease fire agreement with Burma’s military regime the DKBA were rewarded with lucrative timber and mining concession and given the right to levy “taxes” in territory under their control.

Many observers believe that the DKBA and its senior leaders have made huge sums of money from drug trafficking amphetamines and running brutal extortion rackets.

In May of last year the DKBA accepted the Burmese junta’s proposal to convert the ceasefire group into a ‘Border Guard Force’ (BGF).