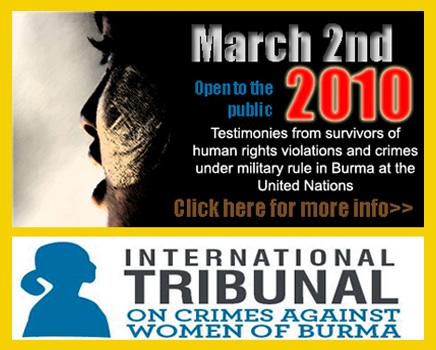 INTERNATIONAL TRIBUNAL ON CRIMES AGAINST WOMEN OF BURMA

The Tribunal is a women‐directed and women‐centered justice and advocacy initiative. Judges will hear testimony from several women of Burma who will share their personal stories of surviving human rights violations and crimes under military rule in Burma. Their voices, and the findings and recommendations of the judges, will be directed to the Burmese regime and the internal community. The Tribunal will provide a powerful spotlight on the oppression of women of Burma in order to support the development of a just and peaceful Burma.

Burmese workers killed by soldiers
Three Burmese were killed and five others wounded when soldiers opened fire at a pick-up truck loaded with workers being smuggled into the country in Ranong province on Thursday morning, police said.

Pol Lt-Col Pichit Sunthorn, a duty officer of Pak Nam police station in Ranong’s Muang district, said soldiers of a task force company of the 25th Infantry Regiment, who were in another vehicle, tried to stop the smuggglers’ vehicle, which was carrying illegal workers from Kawthaung province in Burma.

The vehicle, which was heading towards them, failed to stop and the troops opened fire. The truck was forced to a stop after three of its tyres were shot out. Seventeen bullet holes were found on the body of the truck.

Inside the vehicle they found 13 Burmese workers. Three of them, two men and a woman, were dead and five others suffered bullet wounds. The injured were taken to Ranong Hospital.

Supot Mongkoltangsirikul, 35, the driver of the truck, said he had been paid 500 baht per trip to take the workers to Ranong Thani Housing Estate in Ranong.

The soldiers were initially charged over the three deaths. However, since they were performing their duty, the provincial prosecution would further investigate and decide how to proceed with the case, he said.
BKK Post

It says a lot about our country when the day we chose to expel millions of destitute migrant workers to face violent oppression back in Burma is the same day as Macha Bucha Day.

Macha Bucha is the day the Lord Buddha set forth the fundamental principles of his teachings: abstain from all evil, cultivate good, and cleanse our mind of impurities.

Being human, we stray. But on Macha Bucha Day, we should at least try to abstain from all forms of violence, give to the needy, and meditate on the laws of impermanence to let go of our egoistic attachment – if we still consider ourselves Buddhists, that is.

The first Macha Bucha occurred on the full-moon day of the third lunar month, nine months after the Buddha’s enlightenment. This year, it falls on Feb 28, the day when the government ends its reprieve for those who desperately need help – the migrant workers who fled harsh poverty and violent persecution in Burma.

I am talking about Thailand’s harsh policy to deport all migrant workers who still do not have nationality verification papers from their governments by Feb 28. About 2-3 million migrant workers will be affected. Most of them are ethnic minorities such as the Mon, Karen, and the Shan who are severely persecuted by the Burmese military junta. Many are Rohingya, who have zero chance of getting any citizenship consideration from Burma.

In response to petitions from rights groups, the Abhisit administration issued an about-face measure last month by making Feb 28 the deadline for just the nationality verification application, and by allowing migrant workers another two years to finish the process. END_OF_DOCUMENT_TOKEN_TO_BE_REPLACED

Troops in Ranong, 580 km (360 miles) from Bangkok fired shots to try to bring the truck to a halt as it sped towards them, but eight of the 13 migrants were hit, three fatally, Police Colonel Veerasin Kwangseng told Reuters by telephone.

“Initial reports showed the vehicle was heading toward them and they shot at the tyres in self defence when it failed to stop,” Veerasin said.

The Thai driver of the truck would likely be charged with attempted murder for his failure to stop, and with smuggling illegal aliens, Veerasin said. The survivors would also be charged with illegal entry into Thailand.

The incident came two days after the New York-based Human Rights Watch released a report criticising Thailand for its poor treatment of migrants, many from neighbouring Myanmar.

The report said migrants from Myanmar, Cambodia and Laos, were subjected to extortion, arbitrary detention, forced labour and physical abuse, often at the hands of state officials operating with impunity.

Ranong, a 30-minute boat ride from the Myanmar port town of Kawthaung, is a major entry point for Burmese migrants, of which more than 1 million work in Thailand, many illegally, in tourism, construction and manufacturing sectors.
Reuters

Bowing to pressure from China, ailing United Wa State Army (UWSA) leader Bao Youxiang is at last on his way to Tangyan, 83 miles south of Shan State North capital Lashio, for a “final meeting” with Naypyitaw’s chief negotiator Lt-Gen Ye Myint tomorrow, according to a source close to the Wa leadership.

7 other members are on the Wa delegation but their identities have not been disclosed except for U Aung Myint aka Li Julieh, who will act as his interpreter. “Suffice to say his closest aide Zhao Zhongdang has been left behind to keep house,” he said.

Bao, who has for years been suffering from a chronic case of trichinosis, was “advised” by a Chinese official on Monday, 22 February, to accept the invitation from Naypyitaw for the meeting, according to him.Contrary to the report yesterday, which was given by another source, this source, who is younger and more active, says no Chinese officials will be accompanying Bao’s entourage. “We heard they will be coming from Rangoon to observe the meeting,” he said. 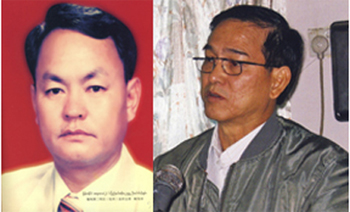 Bao Youxiang and U Aung Myint photo: UWSA
Its southern ally, Mongla, meanwhile, has been quiet. “I think whether or not there’ll be a meeting with us depends on tomorrow’s outcome of the meeting with Chairman Bao,” said an officer from Mongla-based National Democratic Alliance Army (NDAA). END_OF_DOCUMENT_TOKEN_TO_BE_REPLACED

Only 3 days remain for Burmese migrants
THURSDAY, 25 FEBRUARY 2010 16:43 HSENG KHIO FAH
An internal document of the Thailand’s Ministry of Labor said Burmese migrants will have one more month extension to fill in the nationality verification (NV) forms with his/her biographical information to submit to their home governments if he/she agrees to go through the NV process by the original deadline, 28 February 2010, according to Human Rights and Development Foundation (HRDF).

Migrant workers will have until 31 March 2010 to submit the NV forms after they signed agreement to enter the NV process. If they [migrant workers] don’t agree to go through the NV process by 28 February, their work permits will not be renewed and they shall also be subject to arrest and deportation, according to the document.
It said, “Migrants have to say as he/she has yet to submit the NV form, he/she will submit it prior to 31 March 2010.”

And if migrant workers agreed to enter into NV before 28 February, but do not submit their documents by 31 March 2010 as agreed, the Kor Tor 13 extension of their work permit will be revoked. Moreover they shall be arrested and immediately deported.

However, up till now, almost all of migrant workers are still worried about providing their personal information to the Burmese authorities. END_OF_DOCUMENT_TOKEN_TO_BE_REPLACED

Feb 25, 2010 (DVB)–Detained opposition party members who deserve to be in the party’s central committee must be included, opposition leader Aung San Suu Kyi has announced.

The pledge was made following the release last week of the National League for Democracy (NLD) party deputy, Tin Oo, who had been kept under house arrest since 2003.
His and Suu Kyi’s imprisonment, as well as crippling restrictions placed on the party by the Burmese junta, has led observers to complain that progress by the party has been slow. Around 430 NLD members are currently behind bars.
A recent reshuffling of the senior-level Central Executive Committee (CEC), whose members rank above the central committee, included the addition of younger members to dilute the ageing leadership and was seen as the first step in reinvigorating the NLD.
“A person who deserves to be a [central committee member], even if currently imprisoned, must not be omitted purely because their imprisonment stops them from working,” lawyer Nyan Win quoted Suu Kyi as saying. END_OF_DOCUMENT_TOKEN_TO_BE_REPLACED 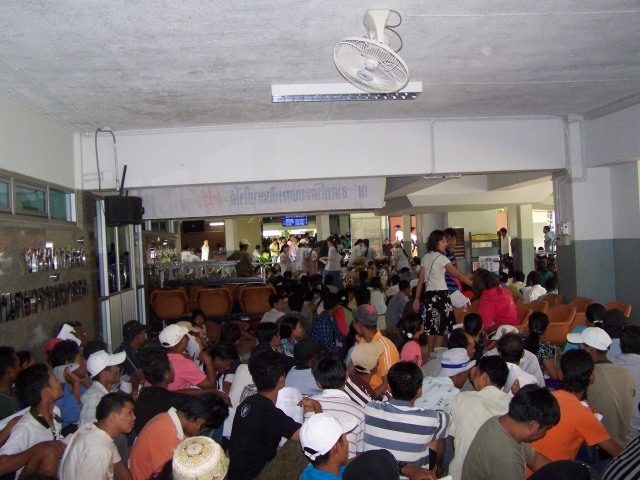 Over 1000 Burmese people were making “work-permit” card, to allow to stay and work in Thailand.They have to pay 3400 Baht everyone to Thai authorities.