BANGKOK — At last count there were more than 2,100 political prisoners in Myanmar, according to human rights groups that track the opaque workings of the penal system in the military-run country. Among them is the unusual case of Nyi Nyi Aung, a naturalized U.S. citizen who gave up a 9-to-5 job in the relative comfort of the suburbs of Washington to campaign for democracy in his native Myanmar.

On Wednesday, a court in Myanmar is scheduled to announce a verdict on charges of forgery, possession of undeclared foreign currency and failure to renounce his Myanmar citizenship when he became a U.S. citizen. He faces 12 years’ imprisonment.

For the administration of President Barack Obama, the case comes at an awkward time, complicating U.S. efforts to try to engage the military government after years of minimal contacts between the two countries.

But beyond the politics of the case is the personal journey of Mr. Nyi Nyi Aung from teenage dissident in Myanmar to exile in the United States and finally what some describe as his curious decision — others call it bold — to travel back to Myanmar last September despite public warnings by the ruling junta that he was a wanted man for his anti-government activities.

Mr. Nyi Nyi Aung had spent the past several years campaigning for democracy in Myanmar from Thailand and the United States, and his work had caught the attention of the junta, which mentioned his name in the official media.

He had made four previous visits to Myanmar since becoming a U.S. citizen in 2002. Each time, including for his current visit, he obtained a visa from the Myanmar government, according to his lawyers. But the September trip appears to have been the first time he visited Myanmar after the junta publicly singled him out for inciting unrest. END_OF_DOCUMENT_TOKEN_TO_BE_REPLACED 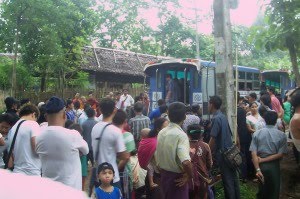 • Between 1:00 AM and 2:00 AM, Thai rangers (Hta Han Phan) and militiamen (Au Sau) guarding Noh Boe (Ler Ber Her) Camp left. They also lowered the Thai national flag and took it away with them.

• The Thai rangers (Hta Han Phan) and militiamen (Au Sau) had not returned at the appointed time, 7:00 AM, for the repatriation of 30 refugee families to the old Ler Ber Her IDP Camp.

• Between 8:00 AM and 9:00 AM, the Thai rangers (Hta Han Phan) and militiamen (Au Sau) in civilian clothes came back to the camp and asked whether there was anyone who would go back to the old Ler Ber Her Camp.

• KRC chairperson Thra Robert Htway came to Mae Sarit to meet with officer Wanna Mu of the Thai Task Force (Chaw Khaw) with regard to the repatriation of Ler Ber Her refugees.

• Plain-clothes Thai rangers (Hta Han Phan) were stationed, for security, along the motor road through which the refugees would be repatriated, and questioned people travelling there.

• Around 9:30 AM, 3 refugee families were transported to the Ler Ber Her dock with the trucks of Noh Boe Thai villagers. Next, they were transported to the old Ler Ber Her Camp with a motor boat at the dock. Those who were repatriated included 4 women, 1 male adolescent and 8 children under the age of 10, 13 people in total, from the family of Saw Thoo Ka Dee, Khaung Laung Thu, and Mu Tet Let. There were no men among those who were repatriated as they were left on the Thai side.

• A company commander from DKBA Battalion (7) was waiting for the arrival of the refugees at the old Ler Ber Her Camp.

• Some UN officials arrived at Ler Ber Her (Noh Boe) refugee camp. Thai rangers (Hta Han Phan) ordered their men not to carry on with the planned repatriation of the refugees in the presence of the UN officials.

• The refugees informed the UN officials that they do not dare to go back to the old Ler Ber Her Camp.

• The refugees wanted to come back as soon as they got the other side of the Moei River. So, the DKBA said to a woman in Ler Ber Her camp through the phone that “if you want to come back, you can. We won’t like it if you will go back (to the Thai side) after coming back here. You can’t do it like that.”

• The refugees had meeting with the UN officials.

• At 12:00 PM, Thai government officials from Bangkok arrived at Ler Ber Her Camp and questioned the refugees about the situation.
P.S. Accusing Thra Gypsy of communicating with the UN, plain-clothes Thai rangers (Hta Han Phan) confiscated his mobile phone.