February 5, 2010
Recently, after a conflict between the troops of the Burmese Army (BA) and a Mon splinter group in the southern part of Ye and Yebyu Townships, many newly displaced individuals have had to flee from their homes. At the same time, the Mon villagers still in the region are restricted in their movements and blocked inside their homes.
Some countries, including a number of ASEAN countries, believe that such problems will be solved after the 2010 elections. However the ruling regime, the SPDC , has not yet announced any laws about the elections and the formation of political parties for the 2010 elections. Nobody knows when the 2010 elections will be.
Actually, if the 2010 election plans are not free or fair, and are manipulated, new conflicts in both the democratic movement and ethnic armed groups could occur. Currently, the regime has no intention of allowing any other political parties like the NLD to participate in elections. If there is no participation by wider pro-democracy political parties, those political parties will be continuously stuck in non-violent political campaigns against this regime, and against a new military-dominated government after the elections.
At the same time, the ethnic nationalities, who have demanded the right of self-determination in their own ethnic regions, and the formation of a federal union of Burma, are not satisfied with the SPDC’s 2008 constitution. This militarized constitution does not solve 6 decades of armed conflicts; instead, new conflicts will occur.
Even though HURFOM would not like to expect such a thing, there will be increased conflicts in Mon areas, and the Mon people will live in dangerous situations, in the upcoming year.

BANGKOK, Feb 5, 2010 (IPS) – Thailand’s attempt to repatriate over 3,000 ethnic Karens who fled the conflict in military-ruled Burma last year has triggered strong local and international objections, including from 27 members of the United States Congress.

“We urgently request that you halt the repatriation of refugees back to Burma’s conflict zone and continue to offer them protection in Thailand,” stated the Feb. 4 letter by the bi-partisan group of U.S. legislators to Thai Prime Minister Abhisit Vejjajiva.

“If forced to return, these refugees will suffer horrific human rights abuses,” added the letter, whose signatories included Rep. Howard Berman, chairman of the committee on foreign affairs. “They will undoubtedly be subject to forced labour, executions, torture and mutilations, forced recruitment as soldiers, and theft and extortion, making their survival very difficult.”

By Friday afternoon, Bangkok appeared to have caved in to some of this pressure, including the cries of concern from the Bangkok-based Lawyers’ Council of Thailand and the Karen Women Organisation (KWO).

“Because of concerns raised, we have decided to temporarily halt the process,” Thani Thongphakdi, deputy spokesman of the Thai foreign ministry, told IPS. “We have asked those who want to return to do so voluntarily, and today 12 Karens from three families went back.”

However, Bangkok views the ground realities in the Karen areas of Burma, or Myanmar, as it is officially known, differently from how the U.S. legislators and the KWO do. “Since the fighting on the other side of the border has stopped, we felt it is safe for them to return,” Thani revealed.

The temporary suspension of the Karen repatriation has done little to ease their anxiety, said Blooming Night Zan, joint secretary of the KWO, which is based in the north-eastern Thai town of Mae Hong Son. “The people are really scared. They fear they will be sent back soon.” END_OF_DOCUMENT_TOKEN_TO_BE_REPLACED

In his address sent to the Kachin Resistance Day celebrations held in Laiza in Kachin State this morning, KIO Chiarman U Zau Hara said that they wanted ethnic rights as envisaged in the historic Panlong Agreement, which was the key to establishing a Union during the independence struggle.

“Our organization is not for money and not for killing people. We are still into revolutionary struggle for self-determination rights agreed to in the Panlong Agreement long ago but which remain unfulfilled till today. If the junta is adamant about the BGF, we will reiterate our demands based on the Panlong Agreement,” a KIO administrative official who attended the ceremony told Mizzima.
The junta has been pressurizing all ethnic armed ceasefire groups to transform their troops into the BGF. The KIO on its part has had parleys with Burmese Army brass on this contentious issue 11 times till the end of last month but there has been no breakthrough. Amidst the impasse, the KIO Chairman has reiterated the outfit’s position rejecting the BGF in his address today.

The Kachin Resistance Day held in Laiza was on a small scale and attended by 500 guests. END_OF_DOCUMENT_TOKEN_TO_BE_REPLACED

There is great concern that as the foreign NGOs and observers have now left the area, and with the weekend coming up, the Thais will restart the forced deportations soon. They have given no commitment to permanently stop the deportations, despite increasing diplomatic pressure from western countries and lobbying by Thai NGOs.

Thailand this morning started then halted the deportation of ethnic Karen refugees to a landmine-infested camp in Burma.
Three families, nine women and four children, including a nine month old baby, were forced back into Burma before the deportations were halted. The halt coincided with the arrival of foreign diplomats and NGOs. Thai authorities had originally blocked their entry to the camp.
While Thai political and military leaders say one thing to the international community and media, soldiers and officials on the ground are doing the opposite.
Sources close to the camp state that to avoid embarrassing pictures of Thai soldiers forcing families to leave, the removals were carried out by people in civilian clothing, and that they could have been soldiers in civilian clothing and vehicles. There are also worrying reports that Thai authorities are trying to stir up negative feelings about the refugees in nearby Thai villages, which they can then use as a pretext for their actions.
The mobile phone of one camp leader was taken by the Thai authorities, in an apparent attempt to stop the spread of information about the forced deportations.
The Burma Campaign UK has received one unconfirmed report that the three families want to return, but are being stopped by the Democratic Karen Buddhist Army (DKBA), an ally of the Burmese military dictatorship which controls that part of the Burmese border. The DKBA is notorious for its abuse of human rights, including use of slave labour and recruitment of child soldiers.
http://www.burmacampaign.org.uk/index.php/news-and-reports/news-stories/thailand-starts-then-halts-deportation-of-karen-refugees-to-burma/13

Notwithstanding appeals and petitions by rights groups and social workers requesting the Thai government to grant more time to refugees as their homeland continues to be unsafe, Thai officials forcibly repatriated the refugees.

The repatriated today, included seven women and children. They were pushed back to Burma by the Thai Army, a Karen Refugee Committee official said.

Ironically, the husbands of the women are still in the camp.

Though plans suggested repatriation of 30 families of a total of 900 refugees sheltered in Noe Boe temporary refugee camp, only three families were sent back today.

When asked by the UNHCR, the refugees said they were going back to Burma voluntarily.

The villages the refugees come from, are in the areas controlled by ethnic Karen armed groups, the DKBA and KNLA. Besides, landmines are planted there. Both armed groups have made it clear through the media that they will not take any responsibility for landmine explosions.

At the moment there are no signs of continuation of repatriation from the camp, even as UNHCR and TBBC negotiate with Thai authorities on the contentious issue.
Mizzima News
————————
Remarks by H.E. Abhisit Vejjajiva, Prime Minister of the Kingdom of Thailand, on the Occasion of the Inaugural Ceremony of the ASEAN Intergovernmental Commission on Human Rights (AICHR)

Member States should continue with their efforts, both individually and collectively, in support of AICHR. National institutions should be further strengthened as they are the most effective bodies to safeguard against human rights violations and provide remedy to victims. Regional norms and institutions have to be further developed in order to complement the universal norms and international instruments to which we all adhere. ASEAN should be able to address human rights in all dimensions – be they civil, political, economic, social or cultural rights, as well as the rights of vulnerable groups.
http://www.aseansec.org/23531.htm 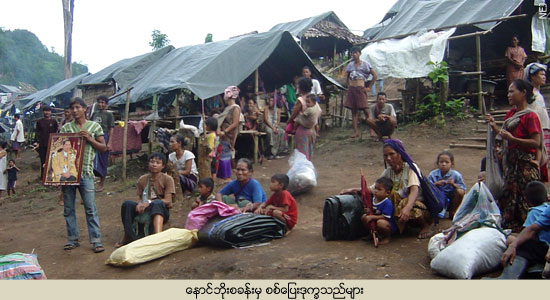