Kyauktaw: The Burmese military authority has confiscated thousands of acres of private land in Kyauktaw Township in Arakan State in order to set up an artillery battalion in the area, said a farmer from the area.

“The confiscation of land by the Burmese army is still continuing in our state and recently a large amount of locally-owned land was confiscated by the army authority for Artillery Battalion 377 to be set up in the area,” he said.

The Burmese army has been constructing the site for Artillery Battalion 377 near Kan Zouk Village in southern Kyauktaw Township, and has confiscated many lands, including farmland and orchards.

“I heard the land is not only for the battalion but also for other purposes, including construction of a new village to be settled by Burman people brought from Burma proper,” he added. 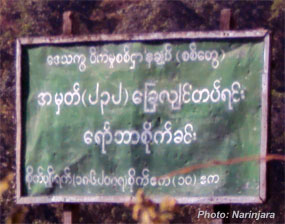 According to a local source, the army authority confiscated over 10,000 acres from several villages located between Kan Zouk Village and Zani Daung Village in southern Kyauktaw Township for the artillery battalion base.

“Farmers from many villages in our area lost their farms to confiscation by the army. As far as I know, the farmers are from Kan Zouk, Pa Long Chaung, Kwa Son, Pring Chaung, Wai Gyi Hton, Pting Daw, Zani Daung, Let Puchay, and Taungbuzar Villages,” the farmer said.

Before confiscating the land, the army authorities forced farmers to sign an agreement stating they were willingly handing over their land to the army.

“The army authority pressured us to sign the agreement. If we refused, our village as well as our houses would be relocated to a remote area. So every farmer signed the agreement to transfer their land to the army because they are afraid of their homes and villages being removed from the area,” he added.

In Arakan State, there were only three battalions in 1988, but battalions now number 60. The military authority has confiscated many lands from Arakanese farmers for army battalions. An estimated two-thirds of land traditionally owned by Arakanese people has been confiscated by the Burmese army since 1988.
Narinjara

Wed 03 Feb 2010, IMNA, Khatter Non
The National League for Democracy-Liberated Area (NLD-LA) Malaysia is currently in the midst of a cross-country educational campaign targeted at Burmese migrant workers living in the country, regarding the upcoming 2010 Burmese elections and the 2008 constitutional referendum.

NLD-LA representatives began leading seminars on January 15th of this year at various locations around peninsular Malaysia, meeting with groups of Burmese migrant workers at township halls in strategic locations. Group members informed IMNA that the seminars are aimed at educating Burmese citizens about the Burmese political process, and preparing them to make informed decisions in the 2010 elections.

“When we go to a place to hold a meeting, an NLD-LA member in the region begins preparing 2 or 3 weeks before we come. This member is in charge of getting the meeting hall, telling people about the date and time of the discussion about the 2010 election, and distributing brochures. If there are no NLD-LA members in an area, we ask a well-know worker in the community, and ask him to be in charge of the preparations,” NLD-LA Malaysia chairman U Kyaw Kyaw told IMNA in a phone interview. END_OF_DOCUMENT_TOKEN_TO_BE_REPLACED

BANGKOK, Feb 3, 2010 (IPS) – A Thai national habit of openly speculating if this South-east Asian kingdom is on the verge of its next coup d’etat is in full flight.

Newspaper reports and commentaries are feeding this guessing game of the country’s powerful military mounting the 19th putsch. It comes three and a half years after the army successfully staged the last one, on Sept. 19 2006, to oust the elected government of former Prime Minister Thaksin Shinawatra.

The 18th coup, in fact, began with a similar political script as the one currently unfolding. The press began speculating about a looming coup in early 2006, the military commanders denied it, till the tanks rumbled through Bangkok’s streets.

‘COUP DEBATE REFUSES TO DIE,’ screamed the headline in Monday’s edition of ‘The Nation’, an English-language daily. The story that followed pointed to the inevitable. “To many observers, a military coup still looms on the horizon, and the question tilts towards when it would happen rather than if it would occur,” wrote managing editor Thanong Khanthong.

The military, for its part, has helped fan the flames by a series of recent incidents. On the night of Jan. 25, 22 armoured personnel carriers (APCs) were spotted driving through the streets of Bangkok, resembling the scene that had played out on the night of Sept. 19, 2006.

This time, though, the APCs were on the streets for a more mundane mission: maintenance and repair work. Yet the apologies offered by the military brass for causing panic in politically jittery Thailand did little to slow down the rumour mill.

Soon after that, the military succeeded in raising more eyebrows through a show of force more typical of a political party than a professional, united fighting force. Hundred of troops, in military fatigues, came out in camps in and around Bangkok to make a public pledge of loyalty in support of the powerful army chief, Anupong Paojinda. END_OF_DOCUMENT_TOKEN_TO_BE_REPLACED

BANGKOK, Feb 3 (TNA) – Thailand’s Office of the Attorney-General (OAG) have received no request from Kazakhstan or Belarus to temporarily release the five-man crew facing charges of illegal possession of explosive devices after arms were impounded from a Georgian-registered aircraft from North Korea at Don Mueang airport in December, according to a senior OAG official.

Sirisak Tiyaphan, director-general of the office of Attorney-General’s international affairs department told reporters that the agency had not received any request from the Ministry of Foreign Affairs.

However, he said, if there was such a request, it would depend on the Ministry of Foreign Affairs’ decision to report it to the government in order to let the agencies concerned to jointly consider how to respond.

His remarks were in response to a report that Kazakhstan had request theThai government to temporarily release the five suspects.

The crew will likely face legal procedures in Kazakhstan and Belarus, MrSirisak said.

The five suspects–four from Kazakhstan and one from Belarus–faced charges, including illegal arms possession.

Their Russian-made plane refuelled at Don Mueang airport on December 12 enroute from North Korea to Ukraine, via Sri Lanka.

New, ready-to-use military weapons include explosives, rocket-propelled grenades, components for surface-to-air missiles and other armaments totally weighing some 35 tonnes were carried on the aircraft.

The five men, who denied any involvement in transporting armaments, were arrested and charged with carrying weapons without permission, illegally bringing them to Thailand and failing to inform officials of their items.

The five-man crew were denied bail and are detained in Bangkok Special Prison. The OAG is scheduled to make decision whether to proceed with the case or not on February 11.

Iran’s Foreign Ministry spokesman denied claims that the Ilyushin Il-76cargo aircraft was bound for Iran’s capital Tehran, saying that there is no link between the aircraft and Iran. (TNA)

according to Ambassador Gérard Araud of France, the country holding the council’s rotating presidency this month.

“As for Myanmar (Burma), for the moment really, no security council member has raised the issue in our contacts I had yesterday with most of them,” Araud told a press conference on Tuesday following consultations among members on the council’s February program of work.On Monday, the French Foreign Ministry issued a statement condemning Burma for violations of freedom of expression and lack of media freedom. The statement followed a Rangoon court’s sentencing of two Burmese reporters to long prison terms.

Commentators say that after the attention given by the Security Council to the Burma question following the 2007 demonstrations and the 2008 cyclone, Burma has become a side issue within the UN chamber. END_OF_DOCUMENT_TOKEN_TO_BE_REPLACED

Feb 3, 2010 (DVB)–Three monks and two civilians in Burma have been handed lengthy prison sentences, some as much as nine years, for their role in the September 2007 uprising, lawyers say.

After a lengthy trial inside Rangoon’s notorious Insein prison court, the five men were found guilty under the Unlawful Associations Act, as well as possession of foreign currency and illegal border entry.
The three monks, U Waryama, U Yaywata and U Weithuda, all hail from Burma’s central Magwe division. Three other men were also involved in the trial, but have not yet been sentenced.
“The five [sentenced] were on trial without a lawyer so the verdict was quicker for them. They were given sentences from five to nine years,” said Kyaw Ho, lawyer for two of the co-defendants.
“A trial cannot be fair for someone without any lawyer. At least [authorities] should have allowed them to contact their families and hire lawyers.”
Meanwhile, a woman in Rangoon previously sentenced in connection with the 2007 uprising was transferred on 19 January from a Mandalay prison to Kachin state’s remote Myitkyina prison.
Mya Mya Theint, a private computer instructor, was arrested in October 2007 and sentenced to five years’ imprisonment under charges of defaming Buddhist concepts and supporting an “unlawful association”. END_OF_DOCUMENT_TOKEN_TO_BE_REPLACED