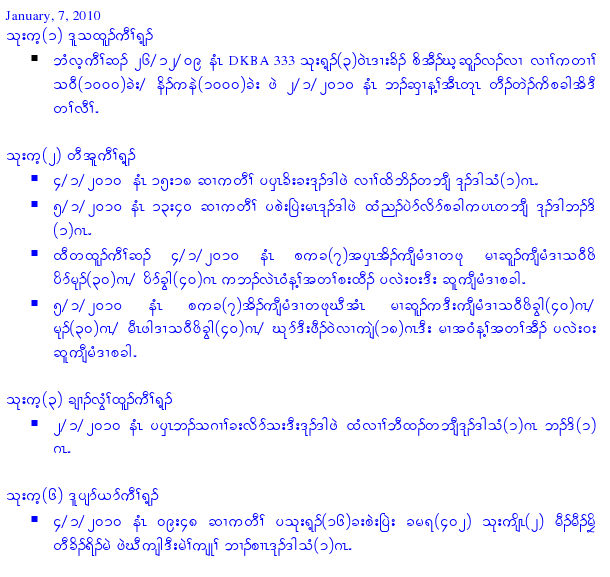 Paletwa: A sergeant from the Burmese army committed suicide on the frontlines of the Indo-Burma border on 4 January, after a commander of his battalion harrassed him, according to a local report.

The sergeant was identified as Kyaw Kyaw Oo from Light Infantry Battalion 234 based in Buthidaung, in northern Arakan State.

According to a village source, he shot himself with his gun during the night at Chin Let Wa Village in Paletwa Township in southern Chin State.

The army used several villagers from Chin Let Wa as porters to carry the body to the Paletwa hospital for autopsy.

Battalion 234 led by Commander Lieutenant Colonel Aung Maung Maung arrived at the border about a month ago to carry out orders.

The suicide rate in the Burma army has been increasing recently for unknown reasons. A Nasaka man from Maungdaw and a soldier from Buthidaung on the western Burmese border both committed suicide last month.
Narinjara

“A special police team from Rathidaung police station came to our village along with our village chairman on 16 December 2009 and took photographs of us, but we did not know the reason behind taking the photos,” he said.

U Maung Krun Aung is from Min Gan Chaung Village in a remote area of southern Rathidaung Township, but he is currently living in Sittwe, the capital of Arakan State, along with his daughter’s family.

“I asked the police inspector the reason for taking photos of our family but he told us he did not know. He told us that it was on instruction of the high authority from Naypyidaw,” he said.

A police team has taken photographs of all family members of U Maung Krun Aung, including his brother-in-law U Maung Hla and his three sisters.

U Maung Krun Aung was elected in the Rathidaung constituency for the NLD in the 1990 election, which the NLD won in a landslide. The military authority refused to transfer power to the democratically elected party.

Since then, the military authority has attempted to force U Maung Krun Aung to resign from the NLD but he has not bowed to pressure. The authorities subsequently targeted his business and blacklisted and harassed him in Rathidaung.

Because of this, U Maung Krun Aung left Rathidaung for Sittwe in 2000 to escape the authorities’ harassment.

A political analyst from Sittwe said, “I think the 2010 election is very close, so the authority has plans to control not only NLD members but also their relatives during the election period. The authority may force the family members of the NLD to cast votes for the government sponsored party in the 2010 election.”

Dhaka: A two-day meeting on the maritime dispute between Burma and Bangladesh started on Friday in the Bangladesh port city Chittagong.

The meeting began at Hotel Agrabad in the port city at 9:30 am.

The first day’s meeting was concluded around 2 pm, and will reconvene again on Saturday.

U Pe Than U, Burma’s envoy in Bangladesh, and Anup Kumar Chakma, Bangladesh’s ambassador in Rangoon, attended the meeting.

This is the first such meeting since Bangladesh turned to the United Nations’ arbitration court in October of last year to resolve the disputes with India and Burma over maritime territory in the Bay of Bengal.

Bangladesh also made it known at that time that options for bilateral discussions and settlement would remain open.

Foreign ministry officials say Bangladesh, India, and Burma cannot exploit the full benefits of their oil and gas reserve in the Bay due to the claims and counter-claims on the offshore blocks.

Out of Bangladesh’s total of 27 claims, Burma and India have made overlapping claims on at least 18 offshore blocks in the complicated maritime geography.

Ethnic Kachin people in northern Burma have called for global action and prayers to halt the Irrawaddy dam project by the Burmese military junta, which is heading towards demolishing historic places of the ethnics even as it threatens their lives.

The Kachin Development Networking Group (KDNG) is distributing leaflets around the country and the international community to pray on Kachin State day on January 10, 2010 to halt the hydro electric power project.

The general secretary of KDNG, Tsaji from inside the country told KNG that they plan to bring awareness among Kachin people and internationally on the real dangers of the Myitsone hydro electric power project to the state and civilians. END_OF_DOCUMENT_TOKEN_TO_BE_REPLACED