Chiang Mai (Mizzima) – Two drug smugglers were shot dead by Thai security forces in gun battles in Chiang Rai and Chiang Mai province, north of Thailand even as the Thai government expressed worry that more drugs would be smuggled into the country given the fighting between the Burmese Army and ethnic armed groups.

Col Somsak said the clashes occurred on Saturday, when border patrols from the task force found armed men trying to cross into Thailand. They opened fire on Thai forces. The gun battle lasted more than 10 minutes. Officials found two unidentified bodies believed to be of Wa soldiers. They also found 50,000 methamphetamines in a bag, labeled “WY” produced in Burma. The other gunmen fled.

On Friday, Pol Maj Gen Songtham Alpaj, Chiang Rai Provincial Police Chief said that officials were apprehensive that drug trafficking would increase in the area. On Friday, The police set up a check point in Phaya Mangrai district and inspected a car used by traffickers. The smugglers tried to escape and opened fire on the police, according to a report in a Thai news website the Manager.

After the gun fight the police inspected the area and found two bodies identified as that of Pichit Tochuwech and Somsak Buachuwong. They seized 48,000 methamphetamines and seven kilograms of Ice drugs from the car. END_OF_DOCUMENT_TOKEN_TO_BE_REPLACED

BANGKOK, Oct 31 (IPS) – With the annual monsoon rains ending, there is a growing fear among the Karen ethnic minority living along military-ruled Burma’s eastern border of a dry season offensive. The most vulnerable are villagers residing in the vicinity of the controversial Hat Gyi dam.

The Burmese military will use its proxy force, the Democratic Karen Buddhist Army (DKBA), to target the area along the Salween River that is essential to the Hat Gyi dam, environmentalists and human rights activists told IPS.

Besides driving out the unarmed Karen civilians, the offensive will also target the fifth brigade of the Karen National Liberation Army (KNLA), currently camped along the Salween River, which flows past the border that Burma shares with Thailand, they added.

The KNLA is the armed wing of the Karen National Union (KNU), which has been waging Asia’s longest separatist struggle—since 1949—to carve out an independent state for the Karen minority in Burma, also known as Myanmar. The DKBA is a breakaway group, splitting from the KNU in 1995 and joining forces with Burma’s oppressive regime.

“The attacks in the fifth brigade area to defeat the KNU and clear the area for the dam will result in thousands of Karen fleeing across the Thai border as refugee,” said David Thakerbaw, vice president of the KNU. “It will lead to more human rights violations, adding more suffering to what the people have already endured.”

“People in that area are opposed to the Hay Gyi dam for this reason,” he added during a telephone interview from an undisclosed location along the Thai-Burma border. “The dam area will become more militarised; the Burmese army will bring in more troops to keep the site under their control.”

Such a grim forecast stems from what happened in June, soon after the monsoon rains broke. The Tatmadaw, as Burma’s over 400,000-strong military is called, launched an offensive with the DKBA, vanquishing the important seventh brigade of the KNU. The surprise attack forced over 4,000 already displaced Karens to flee into Thailand.

This onslaught and the link it had to the planned Hat Gyi dam, which the Electricity Generating Authority of Thailand (EGAT) has agreed to partially finance, prompted the KNU to ask the Thai government of Prime Minister Abhisit Vejjajiva to withdraw Bangkok’s support for the dam. END_OF_DOCUMENT_TOKEN_TO_BE_REPLACED

From a tear drop of Avalokitesvara
You came to us –
Beautiful, tranquil, loving and kind,

In you I seek refuge.
We hide behind our masks
Of indifference or toughness,
We try hard to do the things
That gives us comfort;
We try to numb the pain
And to delay the time of death,
And yet some of us indulge
To hasten our own deaths.
We pretend that we can cope
When we are falling apart;
We avoid eye contact with each other
In fear of revealing our hearts.
Oh Tara,
In you I seek refuge.
We hide behind a façade of busyness;
Artists filling their canvases with paint,
Indignant activists fighting for change,
Designers showing off their latest creations
For those who live for trends,
Humanitarians desperately helping the desperate,
Not wasting a moment in just staying still;
Cruel dictators ordering soldiers to kill
Anyone that they regard as enemies;
Politicians prioritising popularity
Above their true conscience;
Confused and lost,
Some of us wander around
Hearing voices in our heads,
Some of us seek safety in our
Little worlds of self indulgence;
Collecting friends, admirers
Or inanimate objects.
Oh Tara,
In you I seek refuge.
How long do we have be like this?
How many lifetimes do we have to live
Before we find solace from this ocean of suffering?
Oh Tara,
In your loving smile
I seek refuge.

Defence lawyers said, the Mingalardon Township judge, who presided over the court inside the notorious prison, on Friday announced that the trial will now be held in the Southern district court. The next hearing is on November 16.

“The judge did not give any reasons for the transfer of the case to another court. Though it is not outside the procedure to transfer the case, it also means that the case would be handled by a higher court,” said Kyi Win, one of the defence counsels.

He added that while the charges remain the same, it is also possible for the higher court to add more charges against the accused.

Currently, prosecutors – the Mingalardon Township Police – have charged Nyi Nyi Lwin of fraudulence and forgery of a Burmese national identity card. But the accused has pleaded not guilty.

Nyi Nyi Aung was arrested on September 3, when he arrived at the Rangoon international airport from Thailand. He is currently detained in Insein prison and his lawyers said he is in good health. However, family members are still unable to meet him.

Nyi Nyi Aung was a student activist, who fled to Thailand in the wake of the military crackdown on protesters during the 1988 nation-wide uprising. He later resettled in United States and was naturalised as a citizen.

The US embassy in Rangoon has reportedly provided assistance, arranged a meeting between him and an embassy official in the prison and provided lawyers to defend him. 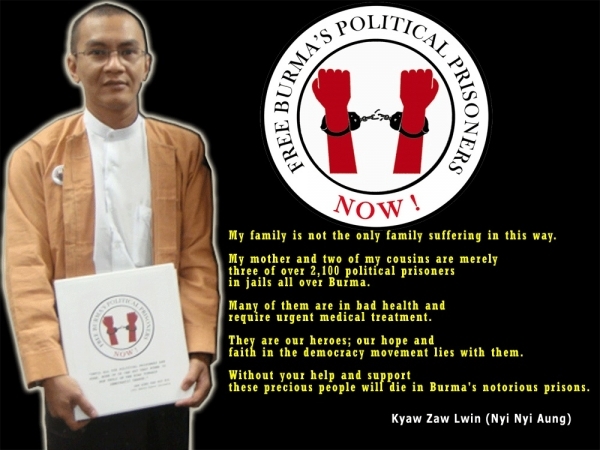