Written by KNG
Saturday, 24 October 2009 16:52
China has put up posters warning its citizens to stop crossing the border, making investments and going in for business ventures in military-ruled Burma, contiguous to the country’s southwest Yunnan province, said border sources.

An eyewitness on the Sino-Burma border told KNG today, that A-4 size posters were officially released on October 20 by the Chinese government. The posters have been pasted in border markets, road intersections and road corners in Chinese territory as of October 22.

Public interest in the Shan ethnic minority, a subject some scholars say is vastly under-explored, has been given a boost by a recent seminar at Chulalongkorn University.

The seminar, a joint effort by the university’s Institute of Asian Studies and Shan arts and culture associations, has brought a huge smile to Puendam Laemthong, chairman of the Shan Cultural Association of Thailand.

He said the three-day seminar, which ended on Oct 17, was intellectually invigorating and it was useful in spreading knowledge and insights about the different perspectives of Shan cultural roots.

As a Shan, he said he felt proud that the seminar had focused attention on the ethnic minority’s heritage.

”At least some people in this world have taken the interest to study, research and document our ethnic culture,” Mr Puendam said.

The seminar brought together large groups of people from the political, economic and social sectors as well as historians and non-governmental and civic organisations.

Discussion panels stirred constructive and thought-provoking exchanges of views from experts which left many wondering why the Shan ethnicity, which shares many cultural features with people in the Asean region, has not been given more attention in academic circles.

The seminar included an intermission during which a rare Shan traditional dance was performed while Shan delicacies were offered to attendees. 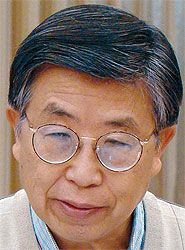 Mr Puendam said many Shan ethnic people living in Thailand as migrant workers were not able to attend the forum. Some were thought to have entered the country illegally and did not wish to be identified.

He estimated that people of Shan descent make up half of the migrant workers, both legal and illegal in Thailand. It is believed as many as 3 million such workers make a living here.

The Shan people form small self-help groups to look after one another. When called upon, they come together to assist fellow Shans in distress.

Mr Puendam said he and other Shans were thankful to the people of Thailand who had accepted them into their society.

The Shan history is made up of fascinating, little-known facts. Kuensai Jaiyen, editor of the Shan Herald Agency for News, said German researchers had found after 20 years of study that Taoism may have originated in the Shan area.

He said it was a discovery that had excited the academic community.

The Shan expatriates hope one day to be able to establish an international academic network devoted to the compilation of all aspects of Shan culture, history and tradition.

The recent seminar may already have drawn people’s attention to an ethnic population that has long been overlooked. 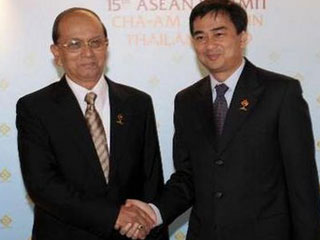 HUA HIN, Oct 24 (TNA) — Myanmar Prime Minister Gen Thein Sein has told his Thai counterpart Abhisit Vejjajiva that his country would not allow anyone opposing Thailand to use its soil as a springboard to attack the kingdom.

Gen Thein Sein, who is now attending the 15th Association of Southeast Asian Nations (ASEAN) summit being held in the Thai resorts of Hua Hin and Cha-am, reportedly told Mr Abhisit on the sidelines of the summit Friday that Myanmar upheld the principle of living in harmony and that it would not allow anyone opposing Thailand wishing to use his country as springboard in attacking this country.

Expressing his confidence that Southeast Asian countries, including Thailand, could sail through obstacles and negative challenges, Gen Thein Sein told Mr Abhisit that both Myanmar and Thailand share a long border and both countries have to depend with each other and good neighbourliness is, therefore, significant.

Gen Thein Sein’s remarks were made after Mr Abhisit and Cambodian Prime Minister Hun Sen traded words after the Khmer leader reasserted Friday on arriving for the ASEAN summit that his government would reject any Thai request to extradite former Thai prime minister Thaksin Shinawatra if the self-exiled ex-premier accepts an invitation for refuge in Cambodia.

Mr Hun Sen told journalists to read the extradition treaty thoroughly to understand why the former Thai premier, whom he described as his friend, can stay in Cambodia as a guest of the Cambodian government.

Ousted in a bloodless coup in September 2006, Mr Thaksin jumped bail and fled sentencing to a two-year jail term for malfeasance in the controversial Bangkok’s Ratchadapisek land purchase case.

The toppled Thai premier now spends most of his time in the United Arab Emirates after his status as a visitor was rejected by a number of countries including both the United Kingdom and Germany.

Thanking Myanmar for its support given to Thailand as chairman of ASEAN, Mr Abhisit told Gen Thein Sein that his government supports Japan’s financial assistance bestowed to Myanmar on various projects, including developing hospitals and schools.

Mr Abhisit said his government, as a close neighbour to Myanmar and host of ASEAN, had told every country to strengthen ties with Myanmar and had requested the Myanmar government leader to “unofficially report” on progress on development projects in his country during the ASEAN summit on Saturday.

Wishing Myanmar to successfully hold its general election next year, Mr Abhisit also told Gen Thein Sein that he hopes to officially visit Myanmar when he has the opportunity and to also meet Myanmar’s opposition leader Aung San Suu Kyi to boost democracy for the world community.

Thailand and China agreed to press on with the logistics project to develop and expand trade linkages in Southeast Asia and southern China.

“Thailand is interested to invest in logistics with other Asean member countries with the financial assistance from China,” Commerce Minister Porntiva Nakasai said after meeting China’s Commerce Minister Chen Deming at the 15th Asean Summit in Hua Hin on Saturday.

The first trade linkage will connect Da Nang, Trat, Mae Sod and Malamang. The second route will link Kanchanaburi and Dawei, where there will be a seaport connecting Asean, China and India. The third route will cover Yunnan, Bangkok and Singapore.

Mrs Porntiva said the Chinese government was ready to support the 15-billion-dollar China-ASEAN loan package for this project under the Greater Mekong Sub-region (GMS).

“Thailand has proposed many routes and it is necessary for Asean to know if different member countries involved in the project agree with the plan or not.

“We’ll see which routes are worth the investment. We have to ensure that the standard of construction will be consistent,” the minister said.

The China-Asean loan package will not cover the routes to be constructed in China, as the country already has its own funding.

Thailand and China also agreed to expand their bilateral economic and trade cooperation. Both sides will come up with a five-year plan by next month, the minister said.

On the new requirement imposed on fruit exports to China, she said the Chinese government agreed to reconsider Thailand’s request for China to extend its sanitary standard certification for Thailand from six months to one year.
BKK post