New Delhi (Mizzima) – The Charge d’Affaires from the United States Embassy in Rangoon on Tuesday met with leaders from Burma’s primary opposition party – National League for Democracy – to discuss the US’s new policy vis-à-vis Burma, according to the NLD.

NLD spokesperson Nyan Win said US Charge d’Affairs Larry Dinger, the highest ranking US diplomat in-country, and two other officials from the US Embassy in Rangoon visited their office on West Shwegondine Street to go over the new US policy on Burma.

“They explained to us that the US plans to maintain sanctions but will also directly engage the military government. He [Dinger] also asked us of the NLD’s stand on the new policy,” Nyan Win explained.

The meeting with the NLD central executive committee (CEC) members lasted for about an hour, from 2:30 p.m. to 3:30 p.m. (local time).

The session came as a follow-up to the meeting between US, United Kingdom and Australian diplomats and detained party leader Aung San Suu Kyi on October 9.

“The NLD welcomes the meetings and has a policy of working together with the international community,” Nyan Win added. END_OF_DOCUMENT_TOKEN_TO_BE_REPLACED

Cha-am, Thailand 20 October – Activists expressed their deep disappointment over the absence of ASEAN officials during the final day of the 2nd ASEAN Peoples’ Forum (APF) in Cha-am, Thailand. In addition, civil society representatives singled out Burma for its systematic human rights violations and called for the release of all political prisoners including Daw Aung San Suu Kyi, and for genuine political dialogue between democracy groups, ethnic nationalities, and the regime.

After the reporters summarised yesterday’s discussions on ASEAN’s four pillars, the steering committee passed out copies of the draft conference statement, which will be presented to the ASEAN heads of state at the 15th ASEAN Summit in Hua Hin, Thailand, this weekend. After a vigorous debate over the content of statement, the steering committee began incorporating proposed amendments to the statement. The morning plenary concluded with a press conference that was broadcast to international media over the Internet.

Suntaree Saeng-ging from the Thai NGO, Coordinating Committee on Development (COD), opened the press conference with a statement that expressed civil society’s disappointment with ASEAN member governments and the ASEAN Secretariat because they failed to attend the APF after making initial commitments to participate. ASEAN’s lack of cooperation severely undermined ongoing dialogue processes between civil society organisations and ASEAN officials, she said. The draft statement reiterated civil society’s disappointment over ASEAN officials’ decision not to attend the Forum. END_OF_DOCUMENT_TOKEN_TO_BE_REPLACED 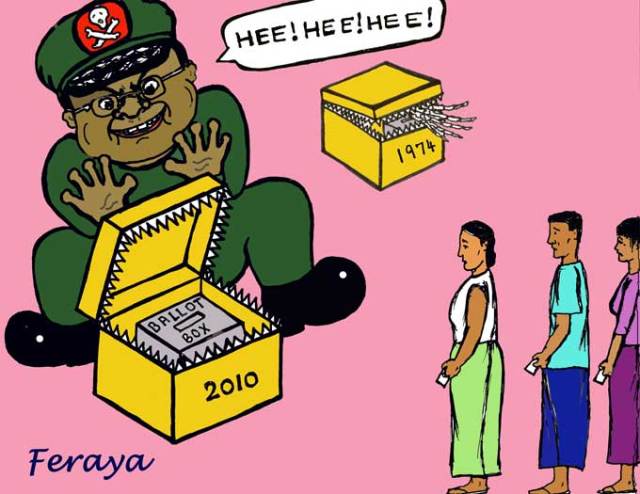 Than Shwe (thinking): “but the final result will be a 96% vote just like last year’s vote!”

Dear All, We would like to invite you global day of action against Shwe gas project in Burma. Please, view attached files for more information and following information.

Look forward to see you. You may also send this invitation to anyone who supports free Burma.


View this document on Scribd

In 1947, Bo Gyoke Aung San met with ethnic leaders, mostly Shan, Kachin and Chin, and concluded an agreement in a town named “Panglong.” The agreement became known as the “Panglong Agreement.”

A Panglong principle or spirit of equal representation was born along with the Panglong Agreement. What is sad is that the spirit of the agreement was missing in each of the following Burmese constitutions.

So what is the Panglong Agreement and Panglong spirit?

In the Panglong Agreement preamble, it is described: “The members of the Conference, believing that freedom will be more speedily achieved by the Shans, the Kachins and the Chins by their immediate co-operation with the Interim Burmese Government, have accordingly, and without dissentients, agreed:”

With the Panglong Agreement, ethnic leaders entrusted their fate to Gen Aung San to determine their future by achieving absolute independence from the British followed by a power-sharing. In return for their cooperation, Aung San agreed to equal rights for ethnic people and assured them of a Union form of government with power sharing as well as a right of secession. An spirit of mutual trust and mutual benefit was born in the Panglong spirit. But it did not last long.

However, in the 1947 Constitution, ethnic leaders say that real power was not with the lower bodies, resulting in a semi-federal or unitary state in essence. The central government controlled all power at the local, state and central level, leaving non-Burman ethnic groups no power at all.

An attempt was made to save the Panlong spirit just before the Ne Win era. In June 1961, more than 200 ethnic leaders from Shan, Kachin, Karenni, Karen, Chin, Mon and Rakhine met at Taung Gyi in Shan State and held a constitutional review conference in which they demanded a “genuine federal union.”

As promised in election campaigns, U Nu, then the prime minister, convened a National Convention in February 1962 in Rangoon. In this convention, which political parties, ethnic leaders and government representatives attended, Chao Khun Cho, the minister for Shan State, addressed the convention.

He pointed out the flaws of the 1947 Constitution and submitted a plan to form union they preferred; to unite Burma as one state; to assure equal power to two houses; to send equal numbers of representatives to a “house of nationalities” and to give limited power to federal government whereas residual power remained in the states.

Gen Ne Win interrupted the process by a coup d’état, claiming he was preventing the union from disintegration. As a result, civil war intensified.

Ne Win suspended the 1947 constitution together with the Panglong Agreement. Ne Win launched propaganda a propaganda campaign linking “federal principles” to the disintegration of the union.

There are 135 races or tribes in Burma according to the military’s account. About half of the so-called 135 races are from Chin State, which makes up about only 3 percent of the population. Burma has only eight constituent states: Arakan, Chin, Kachin, Shan, Kayah, Karen, Mon and Burman. The Burman is the largest ethnic group, approximately 60 percent of the population, of about 50 million. The remainder is made up of other ethnic nationalities. END_OF_DOCUMENT_TOKEN_TO_BE_REPLACED

About a dozen DKBA defectors returned to areas controlled by KNU Brigade 6 and Brigade 7 last week, according to KNU and DKBA sources on the border. Some villagers in DKBA-controlled areas have also fled to KNU-controlled areas to avoid forced recruitment by the DKBA, sources said.

Hsa Paw, a member of DKBA Battalion 5, said he was among a group of soldiers who defected to the KNU because they do not want to fight against fellow Karen in the Karen National Liberation Army (KNLA).

The DKBA, now estimated to have some 6,000 troops, began a recruitment campaign in June to increase the army to 9,000, prior to serving as a border guard force under the military government. END_OF_DOCUMENT_TOKEN_TO_BE_REPLACED

A source, who asked not to be named, said that while Ms Suu Kyi’s (left) plight could not be put on the formal Asean agenda, Myanmar could still be discussed during a closed-door ‘retreat’ in which some of the leaders could call for her release. —
MYANMAR has scuttled a plan by fellow Asean members to issue a public appeal seeking amnesty for detained pro-democracy icon Aung San Suu Kyi, a diplomatic source said Tuesday.

‘They rejected it two months ago. They rejected the idea,’ the South-east Asian diplomat told AFP just days before the Association of Southeast Asian Nations (Asean) leaders hold their annual summit in Thailand this weekend.

The source, who asked not to be named, said that while Ms Suu Kyi’s plight could not be put on the formal Asean agenda, Myanmar could still be discussed during a closed-door ‘retreat’ in which some of the leaders could call for her release.


They could also ask that her party be allowed to contest elections planned for next year, the diplomat added.

The diplomat said he understood that a number of other countries backed Myanmar’s position that a public appeal for amnesty for Ms Suu Kyi would amount to interference in its domestic affairs. Myanmar had vetoed previous efforts to use Asean meetings to openly discuss Suu Kyi’s fate.

Asean senior officials who met in Jakarta in August had agreed to work on an amnesty call for the Nobel Peace laureate convicted in August for allowing an American man stay in her lakeside home after he swam uninvited to the compound. 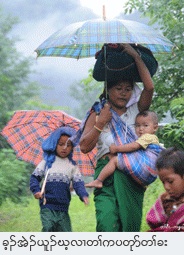