(Mizzima) – Takkatho Tun Naung, a pioneer of Burmese modern music, died of a heart attack in Thu Kha Kabar, a special clinic in Rangoon, at about 8 p.m. on October 6. He was 64.

In 1970, the singer deviated from traditional Burmese music, introducing a popular song called Yee Zar Lochin Del (I want a girlfriend) with a lyric that revealed his innermost feelings.

“The song topped the popularity charts and was a hit among young people in most parts of the country at the time,” a Rangoon-based entertainment news writer said, adding that the debut of the song album did not carry the name of the singer.

The following year, the official debut was made, assisted by the singer’s fellow musician Accordion Ohn Kyaw at a private music studio called Kantkaw Taw.

Along with the studio, a new generation of singers started following his example. They were Takkatho Aye Maung, Kantkaw Taw Myo Aung, Playboy Sein Thit, Min Min Latt among others, the writer said.

The singer was a music critic as well. He studied dental science.

The human rights expert responded to the latest Human Development Report 2009 by the United Nations Development Program by saying the country should prioritize the refugee regularization and implement proper migration management.

Dr. Vitit Muntabhorn, a rapporteur-turned-lecturer professor from the Faculty of Laws, Chulalongkorn University commented on the recent Human Development Report 2009 (HRD) that Thailand should consider the benefits migrants would bring and discuss structural reforms to regularize them.

Dr. Vitit explained that the cross-border migration had been a sensitive issue in the country for years since migrants move as a result of persecution, warfare and insecurity. There would never be a problem if they were regular or came with permission documents but the current crisis had brought about smuggling and trafficking, concerned Dr. Vitit.

The expert insisted that to have the registration channel was a way to lessen the negative impact even though it was not a panacea to terminate the problem. He elaborated that apart from implementing gender-sensitive measures to protect migrants from being victimized and discriminated the country should aid migration-related personnel to provide better social welfare rather than building immigration detention.

Dr. Vitit said that, based on humanitarian assistance and protection, the migration management should be viewed as an ultimate solution in regards to people development.

The professor added that in addition to the recently-passed Migrant Worker Employment Act, broadening registration and occupation access and public support and participation was another important factor to ensure those migrating were granted equal human rights.

For the existing migrants, Dr. Vitit illustrated that the government’s stimulus packages, distributing more health care access and 15-year free basic education could help better the situation. As the problem is linked to development the country should encourage and provide choices for people to stay put rather than wandering advised Dr. Vitit.

The first Burma Ethnic Nationalities Forum was successfully held on 2-3 October 2009 at York University Toronto, Canada. The conference was attended by over 100 representatives of Burma’s ethnic communities from across Canada and by special invited guests, including Canadian Members of Parliament, ethnic leaders and women activists based on the Thai-Burma border, pro-democracy activists and solidarity groups in Canada.

The conference discussed and reviewed recent political developments in Burma, as well as, the escalating violence and military offensives in ethnic areas. The conference also explored effective ethnic responses to the challenges posed by the planned 2010 elections.

The conference notes with growing concern the ever deteriorating human rights and humanitarian conditions in ethnic States and their continuing devastating impacts on the ethnic populations across the Union of Burma. The conference is also highly concerned about the increasing environmental devastation in ethnic areas as a result of development projects and unregulated and excessive resource extraction activities. We call upon the State Peace and Development Council to immediately stop their systematic human rights abuses and institutional violence against the ethnic people. END_OF_DOCUMENT_TOKEN_TO_BE_REPLACED

According to latest reports, increasing number of junta military trucks carrying hundreds of soldiers and supplies have been passing through areas controlled by the ceasefire group, Shan State Army (SSA) ‘North’ since last week especially during night time.

At 21:00 on 5 October, a hundred soldiers from Shan State South’s Kunhing-Takaw based Infantry Battalion (IB) # 296 passed through the area of the 1st Brigade of SSA North near its main base Wanhai, Kehsi Township, said an eyewitness.

The trucks were believed to be carrying ammo, mortars and other heavy weapons. They were coming from Mong Zarng, south of Monghsu, 189 miles northeast of Shan State capital Taunggyi, since 4 October at 20:00 (Burmese Standard Time), said a local villager in Monghsu. 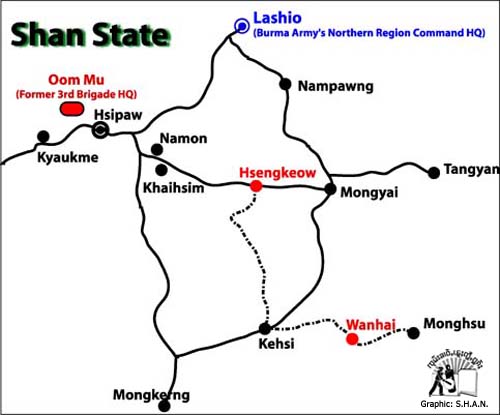 A senior officer of the SSA North said, “They [junta] had never travelled at night before. They only moved during the day time. Even so, they would always inform us [SSA] two days in advance.” END_OF_DOCUMENT_TOKEN_TO_BE_REPLACED

October 7, 2009
This September marks the 2nd anniversary of the Saffron Revolution, which recognizes the peaceful demonstration of Buddhist monks in 2007 and the brutal treatment they received from the ruling regime, the State Peace and Development Council (SPDC). The Buddhist monks were simply demanding peace, but the regime gave them riot police and soldiers with bullets and beating.
The people of Burma have not found peaceful lives for many decades, after the leaders of the Burmese Army seized political in 1962. After 40 days of demonstrations in 1988, then the country’s power was given to a new military regime, and the military rule in Burma continues to this day. The country’s people are suffering economically due to governmental mismanagement and a general lack of individual freedoms. The majority of the Burmese people, including government servants, never enjoy mental or emotional peace.
The Buddhist monks who have daily interactions with the country’s citizens know about the struggles of the Burmese people. Many people do not have sufficient food, some of them cannot afford to pay the country’s high energy costs, and many of them are unemployed. The Burmese people support the country’s monasteries and Buddhist monks through donations, and when the people suffer from economic burdens, they cannot donate food or cash to the monks, and Burma’s monastic community suffers in turn.
The Saffron Revolution occurred when the monks asked for the peace and sympathy of the ruling government, and demanded the SPDC’s accountability and responsibility to Burma’s people. But the ruling military regime rejected these demands, and then riot police and soldiers cracked down the monk and civilian demonstrators. Many monks were killed. However, the regime could not kill peace spirit of the monks, and their support from Burma’s people. The Saffron Revolution was a peaceful revolution of the people, and they continue to remember it in their hearts.
Written by HURFOM · Filed Under Commentary

Military increasing in Ye Township
October 7, 2009
HURFOM, Ye: Starting in the 3rd week of September of this year, the Burmese military authorities have begun actively recruiting from villages in Ye Township, Mons state, in order to increase the number of security officers, local militia, and policemen’s troops in the area.
Over 1,000 households each are located in the villages of Mawkanin and Hangan in Ye Township, and between 500 and 1,000 households are each attributed to the villages of Kaloh, Balaingkee, Chaung Gone, and Arutaung. HURFROM’s reporters found that villagers from the villages mentioned are being increasingly recruited into their local security, militia and police forces.
Nai Mg Nee, a 40 years old Hangan villager said, “before, just ten militia and 5 security troops were based in our village. Now they try to involve villagers in security and militia troops. They [the military authorities] need about 50 [extra] people in the different groups. Also, the policemen are increasing in the village. Before there were only 3 or 4 police in our village, now they will bring 10 more policemen from Ye Town.”
Some Ye residents claimed that the Burmese military groups in their villages, including the militias, security guards and police units are currently being supported largely from extortion money that they get from village residents.
“We have been forced to pay the monthly militia extortion money for 5 years. The government couldn’t offer the militia food supplies and uniforms. Those materials are just got by collecting residents’ extortion taxes. For their costs, they collect 1,200 to 1,500 Kyat per household in a month. They just had 20 troops in the militia troop before. Now they are trying to recruit 30 more people to involve in the militia forces, so we don’t know yet how much extortion money we need more for paying them. At the moment, they have not achieved that amount of people they want to recruit yet. We heard from our village headman said that they will increase the militia taxes until to 3,000 Kyat a month. It is a huge amount of money for our lower class population. That money does not include the money for the locally based military army’s food supplies and security costs. Both cost would be another 1,000 to 2,000 Kyat more in a month,” said Ma Than Htay, a 45-year-old shopkeeper in Kaloh village.
“Even though for rich people, it does not affect their income and survival to pay for the extortion money, as for the lower class residents, we face obstacles to get money and to pay for that amount of extortion money,” she added. END_OF_DOCUMENT_TOKEN_TO_BE_REPLACED

Drake also said advocates Kyi Win and Nyan Win, have been appointed as attorneys to defend Kyaw Zaw Lwin (alias) Nyi Nyi Aung, arrested and detained on September 3 on his arrival at the Rangoon International Airport from Thailand.

Nyan Win and Kyi Win, advocates of the Supreme Court, also teamed up to defend the Nobel Peace Laureate Aung San Suu Kyi, who was charged for violating her terms of detention and sentenced on August to 18 months of a suspended sentence.

US embassy officials, however, did not say whether Nyi Nyi Aung has been officially charged and did not talk about his health condition.

Earlier on Monday, Nyan Win, who is also handling the case of detained opposition leader Aung San Suu Kyi said that he had taken up the case for the release of Nyi Nyi Aung from Insein prison.

Nyi Nyi Aung, who was a student activist involved in the 1988 student-led pro-democracy uprising, is a naturalised US citizen and is reportedly a resident of Maryland.

Sources said he had a valid US passport and a social visit Visa to Burma, when he flew into Rangoon on a TG flight on September 3. END_OF_DOCUMENT_TOKEN_TO_BE_REPLACED