Chiang Mai (Mizzima) – The Thai military has made available more equipment to officials in border areas to check drug smuggling, even as 600,000 methamphetamine tablets and two traffickers were arrested near the border with Burma on Monday.

Gen Ratchakrit Kanchanawat, Chief of Staff of the Thai Royal Army on Wednesday presided over the ceremony providing armaments and equipments, including motorcycles, safety helmets and solar cell electricity generating sets for troops and task forces along the borders.

Gen Ratchakit said 80 per cent of the drug trafficking area is still in the northern border and some parts of the northeastern border. He said to curb illicit trafficking of drugs, it is necessary to increase the efficiency of officials working along the border with neighbouring countries like Burma, Lao and Cambodia.

“The equipment and armament back up would help soldiers reach the area easily and faster. They can have patrols more often and cover places difficult to enter. The solar cell would help in communication with the military bases,” he said.

Meanwhile, Suthep Tueksuban, Thailand’s Deputy Prime Minister on national security on Tuesday presided over a press conference in Bangkok announcing the seizure of a large cache of drugs. With him were Pol. Gen. Patheep Tanprasert and Pol. Gen. Chumpol Manmai, who are both in the running for the post of the Thai Royal Police Commander-in-Chief. END_OF_DOCUMENT_TOKEN_TO_BE_REPLACED

Offering to talk to the junta can work, but only under certain conditions.
he Obama administration recently clarified its intentions to expand direct contact with the Burmese junta, starting with a meeting with junta officials in New York this week. For her part, Aung San Suu Kyi—the democratically elected leader of Burma barred by the junta from taking power for two decades—has made some moves of her own to restart dialogue, sending a letter to junta leader Than Shwe offering to work with the military regime to ease Burma’s pariah status and help get western sanctions lifted. For both the United States and Ms. Suu Kyi, there are big risks but also potential rewards for laying their cards on the table with the junta.

Ms. Suu Kyi has mastered the skill of being tactically flexible while adhering to core principles and focusing on the long-term goals. Her offer to help ease sanctions is a vintage Suu Kyi tactic. While reiterating that the sanctions are not hers to lift or keep, she correctly acknowledges the ability to make things better or worse for the junta on this score. The letter appears conciliatory, but in reality seems designed to put the junta on the defensive. Those who are frustrated by the junta’s determined hold on power will take note of her continued willingness and ability to confront the regime. After more than 20 years in power, the junta itself has made remarkably little progress in its efforts to establish legitimacy at home or abroad. Ms. Suu Kyi’s very existence serves as a constant check on their efforts to establish legitimacy and she seems fully aware of the power this gives her.

Ms. Suu Kyi also appears to make a virtue of her current house arrest at the hands of the junta by asking for briefings on the impact of sanctions from representatives of the countries that imposed them. She also wants to discuss her findings with her fellow party members—difficult to do while under house arrest. She apparently has repeated her long-standing request for discussions with humanitarian organizations on both the problems they are seeing in Burma and ways that they can work with the democratic opposition to help resolve them. By positioning herself as objectively looking at the facts and willing to adapt her views accordingly, she contrasts her reasonableness with both the obdurate ridiculousness of the junta and the rigid image that her critics have attempted to create.

Ms. Suu Kyi has a limited ability to communicate her messages directly, due to her confinement. She thus runs a risk that her tactics will be misunderstood as compromises of the principles that give her moral authority. This has already happened to a degree, as reports by news outlets like CNN, the Independent and the Associated Press have portrayed her latest move as a complete turnabout when it is nothing of the sort. However, the bigger risk of her approach is that the western countries she relies on to give substance to her leverage over sanctions will abandon her by attempting to cut their own deals with the junta. END_OF_DOCUMENT_TOKEN_TO_BE_REPLACED

The order was issued by the Camp-in-Charge and the security personnel destroyed the houses, said Anwar from the unregistered refugee camp.

Jamal and Harban, the staff members of the MSF recorded the destruction of the houses with a video camera, he said.

But, SI Moonir arrested the two staff members of the MSF, who were recording the destruction of the refugees’ houses and took them to the office of the Camp-in-Charge office. Later, they were released, according to an unregistered refugee committee member, Kala Meah.

According to MSF officials, the recorded video tape was safe though the local authorities asked for it.

It is learnt that the Camp-in-Charge and his personnel were informed by the refugees that locals Zafor Ahmed and Kamal, son of Syed Ahmed and their sister Ms. Saylinna had quarreled with registered refugee Sabir, son of Gawsonngya, who was locked and kept in the house of Zafor. At the clashes 15 persons were wounded. Since the registered refugees are under control of the Camp-in-Charge, he was asked to intervene. He went to the spot where he saw some refugees’ houses were built near the road side and in front of the MSF and ACF office. So,he then ordered the houses be destroyed.

The SI Moonir arrested 18 persons of unregistered Rohingya refugees on said day and kept them in the camp security box and released today after taking 3000 Taka from them, Kalam , an unregistered refugee said.
http://www.kaladanpress.org/v3/index.php?option=com_content&view=frontpage&Itemid=45

10/1/2009
Dhaka: A Bangladesh court on Tuesday sentenced three Bangladeshis to life in prison for smuggling fertilizer into Burma, said a report.

A tribunal of Barisal District in Bangladesh handed down the verdict after the three confessed to smuggling the urea fertilizer into Burma.

The convictees were identified as Mohammad Nur and Mohmmad Abdul Gafur of Cox’s Bazar and Kalachan Das Boalia Village in Barisal District.

According to a police report, Bangladesh police seized 2100 bags of fertilizer from a smuggling boat on the Bishkali River on July 16, 2005, when they were attempting to smuggle the fertilizer into Burma.

Police arrested the three smugglers and filed charges against them.

Bangladesh traders have smuggled fertilizer to Burma from Bangladesh in recent years because the fertilizer prices in Burma is twice that in Bangladesh.

However, the fertilizer smuggling was stopped last year after Bangladesh authorities cracked down dramatically on it.

A fertilizer trader from Sittwe said, “Smuggling Bangladesh fertilizer to Burma is totally stopped from last year and now Arakanese farmers have used fertilizer from China for their farms.”
narinjara 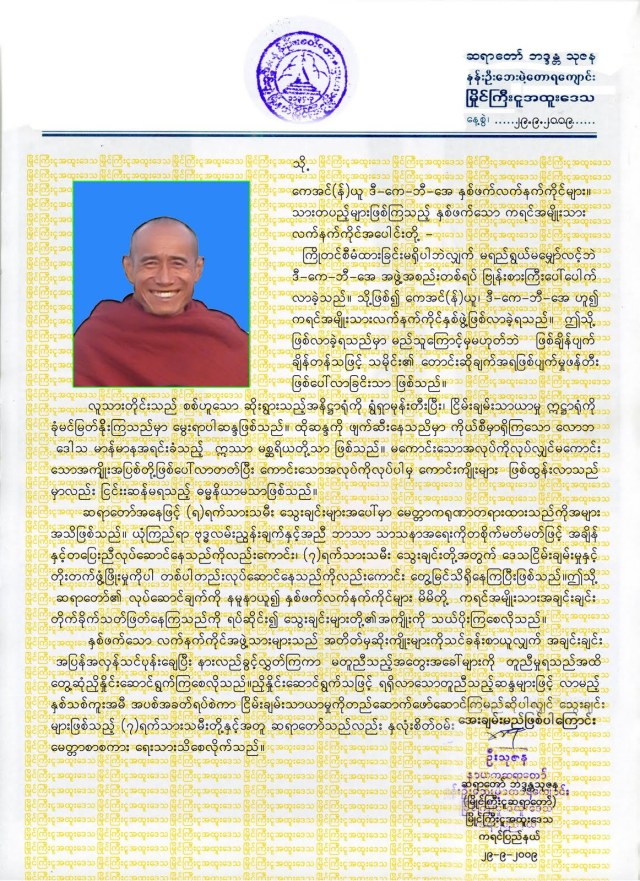