“It is important that we keep ourselves connected by engaging human rights issues around the globe and insisting that our government representatives, business leaders and institutions like the UN do something when rights are violated,” Gere said in The Co-operative’s July 9 press release.

He continued, “If we keep ourselves connected, together we can really make a difference. Tell a friend and help free the VJs and Aung San Suu Kyi.”

Gere also invited people to view Burma VJ, which, with the assistance of The Co-operative, is set to premiere at 40 cinemas across the UK on Tuesday.

“I am very happy to invite you all to 40 screenings all over Great Britain of a truly incredible, very moving and very important film.” Gere said in a video message. END_OF_DOCUMENT_TOKEN_TO_BE_REPLACED

Foreign Policy looks at the benefits for China of changing tack in its relations with Burma and supporting opposition to the military junta, a traditional ally:

Clearly, Burma is an unreliable client for China. Until now, the junta’s failing regime has survived in the cracks of the international system, notably those formed by the mutual suspicion of its giant neighbors, China and India, and by ASEAN’s hands-off culture. But the key message of U.N. Secretary-General Ban Ki-moon’s recent visit to Burma was not his call for Aung San Suu Kyi’s release but the signal his presence sent that those cracks of permissibility had narrowed. Ban would not have attempted his mission had China not signed off on it.

None of this adds up to a break with Burma’s generals. Not yet. But China appears determined to explore whether there is a viable option to them. Call this China’s “Mandela Option.”

13 July 2009 – Myanmar will gain a lot if it increases cooperation with the United Nations and the international community, Secretary-General Ban Ki-moon said today, calling on the country’s authorities to work more closely with the UN to jointly advance the causes of national reconciliation, democracy, respect for human rights and sustainable development.
Briefing Security Council members in New York following his recent two-day visit, Mr. Ban said that in his meetings with Senior General Than Shwe and other senior Government figures, he had “conveyed in the clearest terms what is expected of Myanmar’s leaders” on several issues, and now it was up to them to respond positively.

“The choice for Myanmar’s leaders in the coming days and weeks will be between meeting that responsibility in the interest of all concerned, or failing their own people and each one of you,” he told the Council.

Government pledges to ensure that national elections scheduled for next year are free, fair and inclusive must be translated into concrete action, Mr. Ban stressed, reiterating the need for the immediate release of all political prisoners, particularly opposition leader and Nobel Peace Prize laureate Aung San Suu Kyi.

“The refusal of the senior leadership to allow me to meet with Daw Aung San Suu Kyi [currently facing trial] was not only a deep disappointment, but also a major lost opportunity for Myanmar.”
END_OF_DOCUMENT_TOKEN_TO_BE_REPLACED

UNITED NATIONS, July 13 (Xinhua) — China is opposed to putting the Myanmar question on the UN Security Council agenda and is against isolating and sanctioning against the country, a senior Chinese diplomat said here on Monday, stressing the events that happened inside Myanmar were its internal affairs.

“We believe that the events happened inside Myanmar are the internal affairs of Myanmar itself, which should be handled by its own government and people in consultation,” Liu Zhenmin, China’s deputy permanent representative to the UN, said at an open Security Council meeting on Myanmar.

The situation in Myanmar has not posed any threat to international or regional peace and security, Liu said.

“China has explicitly opposed the inclusion of the Myanmar question on the Security Council agenda. And we are against the policy of isolating and sanctioning against Myanmar,” he told the 15-member Council. “That position of China has remained unchanged.”

UN Secretary-general Ban Ki-moon briefed the Security Council at the meeting on his latest visit to the southeastern Asian country earlier this month, the second in just over a year.

Liu said China supports Ban and his special representative Ibrahim Gambari in their continued good offices on the issue. END_OF_DOCUMENT_TOKEN_TO_BE_REPLACED

Burma is preparing an amnesty for political prisoners on humanitarian grounds so they can contest next year’s general elections, the country’s UN ambassador said Monday.

“At the request of the (UN) Secretary General (Ban Ki-moon), the Burma government is processing to grant amnesty on humanitarian grounds and with a view to enabling them to participate in the 2010 general elections,” Ambassador U Than Swe told the UN Security Council.

He made the remarks after Ban briefed the 15-member council on his Myanamr early visit early this month and warned the military junta to honor to ensure “inclusive, free and fair” general elections next year. 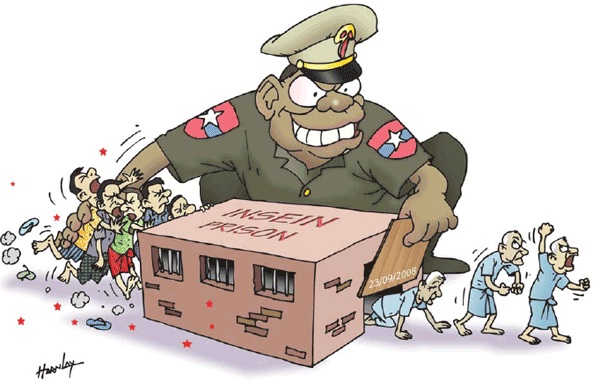 July 13, 2009 (DVB)–The United Nations should be prudent in its expectations for progress in Burma or otherwise risks “misleading” the international community, said a number of prominent politically active Burmese groups.

The UN Secretary General’s visit to Burma two weeks ago has received mixed reviews, with some claiming that his inability to gain concessions despite apparently praising the government merely handed legitimacy to the junta.
A joint statement released by The 88 Generation Students, the All Burma Monks’ Alliance (ABMA) and the All Burma Federation of Student Unions (ABFSU) acknowledged the “limit” of the UN’s mandate in Burma in the face of China and Russia’s power of veto but warned against expectations of change in the country.
“Without unanimous support from the Security Council, your mandate is not strong enough to make the ruling generals in Burma agree to your request,” the statement said.
It also warned the UN to “stop expecting” a positive response from Burma’s ruling generals in the face of 20 years of failed UN diplomacy with the regime. END_OF_DOCUMENT_TOKEN_TO_BE_REPLACED

7/13/2009
Maungdaw: Burmese authorities have temporarily stopped the border fence project in western Burma due to heavy rains, after 40 miles of the fence have been completed.

A government employee from Maungdaw said, “There was no official announcement in this regard, but people noticed it after many soldiers were returned by the army authority to their battalions from the fence project sites.”

Over 800 soldiers from several battalions based in northern Arakan had been working on the fence since the project started in February 2009.

A witness from Nga Khu Ra Village confirmed that many soldiers who had been working in the area were sent to their home bases from the construction sites in small Chinese-made army vehicles.

“It is temporarily stopped because soldiers were unable to work during the rainy season. Many soldiers were suffering from diseases including foot infections cause by sand-scratched feet,” the employee said.

In the first five month period of the project, 40 miles of embankment were constructed to provide a foundation for erecting the fence pillars.

According to an official source, 9,000 pillars were erected over the 40-mile embankment and strung with barbed wire.

Burmese military authorities have been constructing the barbed wire fence on the border with Bangladeshsince February, with the stated aim of preventing human trafficking and smuggling across the border.
Narinjara

Sources told IMNA that the Nai Palai group was ambushed near the Kwan Ping, Tavoy District, Mon State, former site of NMSP brigade 111; they were on their way to a meeting with the Monland Restoration Party (MRP) and also the Nai Chan Dein insurgent group.

Nai Pan Nyut, MRP leader, said that the three groups scheduled the meeting on June 29th to talk about future and common plans. When the NMSP began to shoot, he added, the Nai Palai group fired back.

“The Nai Palai group came to meet Nai Chan Dein and [my group] at the border for our meeting. But during the trip…they were ambushed by the NMSP…Nai Palai members had less experience in fighting, so no one died from the NMSP,” said Nai Pan Nyut.

The Monland Restoration Party split from the NMSP in 2001, and since then the Nai Chan Dein and Nai Palai insurgent groups further split from the MRP. Nevertheless, the Chan Dein group has been involved in joint offensives with the MRP before and has done an effective job of utilizing quick-strike tactics and supporting itself through taxation of villagers and other methods.

An NMSP officer said that their troops fired at the Nai Palai group because the insurgents had been kidnapping and demanding money from villagers and that they had seized NMSP weapons by force.

“We fired at this armed group because the Nai Palai group runs rampant in our territory…and, also, this group asked for a lot of money from villagers so we have to shoot at them,” he said.

Mon 13 Jul 2009, IMNA,
A new Mon splinter group has been demanding money from villages in Ye Township in southern Mon state, financial support promotion of their armed group. The group was founded last June, calling itself ‘Rehmonnya’, and has been active in the Thai-Burma border area.

Rehmonnya has requested financial support from every village in Ye Township In the letters of request, villagers are not given a specific amount to provide, rather the Rehmonnya group is depending on the good will of the people, according to Nai Khin Maung, who is the Major-General of Rehmonnya.

“That’s right, we are demanding money from Ye townships villages. However we are not putting pressure on them, and amounts are depending on their own desires. We need money to buy guns and for promoting our activities”, Nai Khin Maung said in a phone interview with IMNA.

The recent requests for money, is a different tactic compared to previous Rehmonnya funding efforts. Nai Khin Maung, who was a former New Mon State Party (NMSP) soldier and member of the Brigade No. 3 village militia, conducted a raid in June on Brigade No. 3 village kidnapping two retired village headmen.The headmen were only released after their families paid a ransom 50,000 baht. He has also demanded the village pay 100,000 bhat, and laid claim to a farm, seeking 100,000 bhat as compensation in a purported miss-sale of the property. END_OF_DOCUMENT_TOKEN_TO_BE_REPLACED