BANGKOK – The Southeast Asian Press Alliance (SEAPA) expresses grave concern over the filing of a lese majeste complaint against the board of the Foreign Correspondents Club of Thailand (FCCT), and stresses that the development once again underscores the persistent and continuing threat that lese majeste provisions in Thailand’s criminal law pose against press freedom and free expression in Thailand.

“We find this development deeply troubling. All journalists—both foreign and Thai—should be troubled by what is ultimately an attempt to harass the entire media community in Thailand,” SEAPA executive director Roby Alampay said. “We have said it before and we will say it again: Lese majeste provisions in Thai laws must be reviewed by Thailand’s legislators and leadership for the ease by which they can be used to stifle free speech and harass the media in the country.”

Media reports said the FCCT Board was accused of distributing and selling DVD copies of a speech delivered at the club in 2007 by then PM’s Office Minister Jakrapob Penkair. The said speech had been criticized as anti-monarchy, although Jakrapob himself has not been formally charged with lese majeste.

Any citizen can lodge lese majeste complaints in Thailand, but official charges can only come following police investigations into such complaints. END_OF_DOCUMENT_TOKEN_TO_BE_REPLACED

SATURDAY, 04 JULY 2009 11:53 S.H.A.N.
Two Burman civilians, one a retired Burma Army man, were taken into custody last week in Mongphen in the Wa territory, according to a source close to the Wa leadership in Panghsang.The unidentified men were arrested on 24 June after they were found visiting locals without authorized escorts. “They told the villagers they were there to see how they could help to improve their crops,” he said. “On their persons were military maps, marking coordinates of our positions.”

Mongphen is in the disputed Mongpawk area. While the Wa claim it has been under their control for more than 30 years, Naypyitaw insists it is in Mongyang township, 102 km north of Kengtung, the capital of eastern Shan State.

“We have information that the Burma Army has placed big guns in Mongkhark (south of Mongphen),” he added. “Even Chinese authorities have warned them (the Burma Army) that the guns have put the people on the Chinese side of the border at risk.”

The Wa and its allies, Kokang (to its north) and Mongla (to its south) have been on the alert since the Burma Army demanded in April that they become border security forces under the Burmese command. Their other ally National Democratic Army-Kachin (NDA-K) has already accepted the proposal, according to Mizzima and Kachin News Group.
shanland org

Excellencies, Distinguished guests and colleagues Ladies and Gentlemen, This is my second visit to Myanmar in just over a year. Both visits have been at critical times for the country’s future. My first visit was in the aftermath of Cyclone Nargis. This devastating natural disaster, which took so many lives and created so much hardship, touched hearts across the globe. In Myanmar’s moment of need, the world responded generously. I want to personally thank everyone here today for your remarkable contributions to the relief and recovery effort. You have saved lives, rejuvenated communities and made it possible for many thousands of people to reclaim their livelihoods. You have helped Myanmar to overcome adversity. It is important that this work continues. Ladies and Gentlemen, I felt the tragedy of Cyclone Nargis deeply — as a fellow Asian and as Secretary-General. I am Asia’s second Secretary-General. The first was Myanmar’s U Thant. I revere his memory. I also recall his wise words. U Thant said: “The worth of the individual human being is the most unique and precious of all our assets and must be the beginning and end of all our efforts. Governments, systems, ideologies and institutions come and go, but humanity remains.” This is why I have returned. END_OF_DOCUMENT_TOKEN_TO_BE_REPLACED

Seoul. North Korea sought payment through a bank in Malaysia for its suspected shipment of weapons to Myanmar that is being carried on a freighter tracked by the U.S. Navy, a source said Saturday, as quoted by Yonhap.The visit by a U.S. envoy to Malaysia this weekend will focus on ways to cut off the payment transaction for the cargo from the bank in Malaysia to North Korean leader Kim Jong-il, the source said.
“Kim will have a hard time collecting his money,” the high-level source said, speaking strictly on condition of anonymity. The source declined to identify the bank due to diplomatic concerns.
Philip Goldberg, the U.S. coordinator for the implementation of a U.N. Security Council resolution that punishes North Korea for its May 25 nuclear test, is scheduled to arrive in Malaysia on Sunday.The visit comes after the White House said late last month that U.S. President Barack Obama discussed North Korea and financial regulations with Malaysia’s Prime Minister Najib Razakon by phone.It also comes as North Korea’s Kang Nam freighter is apparently returning home after being tracked by a U.S. Navy destroyer that suspects it is carrying cargo banned under the resolution.Resolution 1874, which reinforced sanctions that were imposed after North Korea conducted its first nuclear test in 2006, bans Pyongyang from exporting any type of weapons — light or heavy.According to another source in Seoul, the Kang Nam is believed to be carrying small Soviet-era arms such as AK-47 rifles and RPG-7 anti-tank launchers.AK-47s and RPG-7s are two of the most widely traded Soviet-era weapon types that North Korea is capable of producing on its own.
“Kim appears to have received earnest money for the shipment, but it is a small sum compared to the payment held up in Malaysia,” the source said.
Resolution 1874 bans states from making financial transactions with North Korea that could help the communist state build its nuclear and ballistic missile programs.The U.S. slapped financial sanctions on a Macau bank in 2005 to freeze USD 25 million worth of North Korean assets, effectively cutting off Pyongyang’s access to the international financial system.Banco Delta Asia was also accused of helping North Korea launder money it had acquired by circulating sophisticated counterfeit US$100 bills called “supernotes.”Goldberg visited China ahead of his visit Malaysia.Despite the resolution banning development of weapons of mass destruction, North Korea test-fired a series of missiles Thursday and Saturday into the East Sea, where it had imposed a June 25-July 10 maritime ban for a military exercise.North Korea test-fired a barrage of short-range missiles in the days following its latest underground nuclear explosion.The U.S. believes there are “multiple” North Korean ships used to export weapons.
focus

Mr Ban was under pressure to produce results from his two-day mission to Burma, which was criticised as providing an endorsement of the Burmese leadership just as it is staging a trial of opposition leader Aung San Suu Kyi.

The high-stakes visit to Burma comes at a critical time for Mr Ban, whose low-key approach to his job has been criticised as ineffectual. He came under further fire on arrival in Naypyidaw, the regime’s headquarters, when he told junta leader Gen Than Shwe: “I appreciate your commitment to moving your country forward.”

“That is absolute nonsense,” said Brad Adams, a Burma specialist at Human Rights Watch. “It’s just what we implored him not to say, to make these diplomatic gaffes. Than Shwe has steadily moved his country backwards.” British officials were also furious at the remarks. They had urged Mr Ban not to visit Burma, and risk handing the junta a propaganda prize, without ensuring he would gain concessions in the form of the release of political prisoners and steps towards genuine democracy. Gen Than Shwe said little at his meeting with Mr Ban and did not grant his request to meet Suu Kyi in prison. Mr Ban expressed hope that a meeting could still be permitted. “I am leaving tomorrow, so logically speaking I am waiting for a reply before my departure,” he said. The secretary general added that he had called for the release of all political prisoners before the elections, but got no response.

However, Mr Adams said: “A meeting with Than Shwe is not a success. Even a meeting with Suu Kyi shouldn’t be counted as a success, if all it means is she goes from being in jail back to being under house arrest. –
irishtimes

The Shan Nationalities League for Democracy (SNLD), Burma’s second largest winning party in the 1990 elections, that had together with other registered parties met Ban Ki-moon yesterday, said he did not appear to have secured any promise to release the National League for Democracy (NLD) leader Aung San Suu Kyi and the SNLD leader Khun Htun Oo. 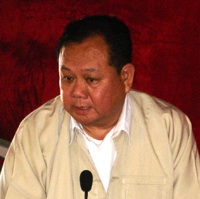 A source close to the SNLD leadership told SHAN this morning the party representatives had asked the UN chief to put “appropriate pressures upon the junta to accept and implement the imperative steps of:
a. all political prisoners be released immediately and unconditionally
b. negotiation between the junta, democratic forces led by Daw Aung San Suu Kyi and ethnic nationalities led by Khun Htun Oo”

The letter was written by the United Nationalities Alliance (UNA), the umbrella group for ethnic parties that had won seats during the 1990 elections.

“It seems Than Shwe may be releasing only non-party activists like Zagana, Venerable Gambira and such,” he said. “If he’s going to release any Shans at all, that will be (Major General) Hso Ten (leader of the ceasefire group Shan State Army “North” who was sentenced to 106 years at Khamti prison).”

Khun Htun Oo, 66, a scion of the former princely Hsipaw House, is known as the “voice (representing) not only that of the SNLD party but also the millions of Burmese people,” according to the exile National Coalition Government of the Union of Burma.

Ban Ki-moon met all the parties’ representatives, including the NLD, together at Myat Taw Win Hotel in Naypyitaw at 16:45. “Each of the parties got only 10 minutes with him,” said the source.

“He is expected to meet the Senior General again this morning,” he added.

The UN Secretary General’s mission includes securing the release of all political prisoners, dialogue among Burma’s main stakeholders and credible elections in 2010.

All winning parties in the 1990 elections are said to be in the same dilemma: “If they are going to enter the elections, they can expect all-out attempts to prevent them from winning. And if they refuse to contest, they are in danger of being dissolved,” said a political analyst in Rangoon.
http://www.shanland.org/