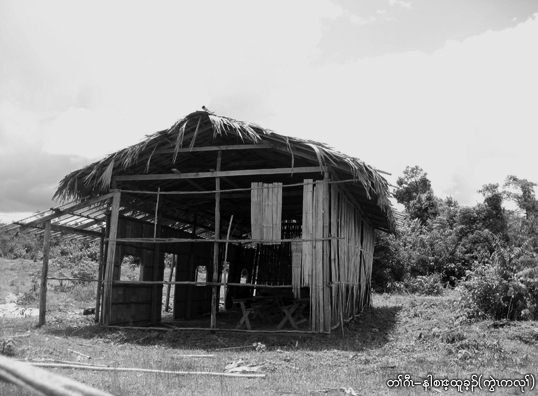 6/19/2009
Taungup: Four democracy activists were released from Buthidaung prison recently after serving their prison terms, said a colleague of them.

“They were released from Buthidaung prison recently after their sentences were completed. Now they have returned back to their home town from Buthidaung,” he said.

The released activists are Ko Than Htay, Ko Moe Kyaw, Ko Zaw Naing, and Ko Aung Naing Min. All are from Taungup in southern Arakan State.

The four were arrested by Burmese military authorities on 27 March, 2008, while they were publicly distributing a statement from the National League for Democracy and a pamphlet with the text of the Universal Declaration of Human Rights.

They were charged by police in the Taungup court under a section of Act 451, which relates to a person trespassing on property without permission from the owner.

The judge in Taungup Township sentenced them to one year in prison without allowing a defense, and sent them to the notorious prison in Buthidaung in northern Arakan.

Even though they were released after their jail term was complete, they have not dared to have contact with the media because the authority has threatened them about disclosing information about the prison to the media. END_OF_DOCUMENT_TOKEN_TO_BE_REPLACED

The meeting took place on June 8th in Naing-praing village, Mudon Township, Mon State. In attendance were about 1,000 people, many villagers coerced by the Village Peace and Development Council (VPDC).

A resident who attended the two-hour meeting dictated to an IMNA field reporter the content of Ohm Myint’s speech:

“this election will not be held as usual. It is not easy to hold elections in this country. So you all should think very carefully before you vote in the election. Do not think wrong and vote for their [opposition parties] government when the election comes.”

This was Ohm Myint’s third visit to Mon State this year. Many residents recall well the General’s SPDC troops burning down the Halockhanee refugee camp in 1994 as well as Baleh-donephai village.

According to the resident, Ohm Myint also said that Mon villages have become much more developed since he was a child. A presenter from the SPDC’s Women’s Affairs Department echoed this sentiment: when compared to the past, she said, Mon state has become developed [because of the government’s administration] and peaceful, as there is no war.

Another resident told IMNA that afterwards, apparently pleased with her presentation, “Brigadier General Ohm Myint gave 100,00 kyat to this woman.”

Officials in Burma’s capital city, Naypyidaw, put Brigadier General Ohm Myint, in charge of the Union Solidarity and Development Association (USDA) in Mon State in 2008. According to an IMNA source within the Mon State USDA, though the move has yet to be announced by the Burmese military government, he (Ohm Myint) will take responsibility for the group’s participation in the upcoming elections. 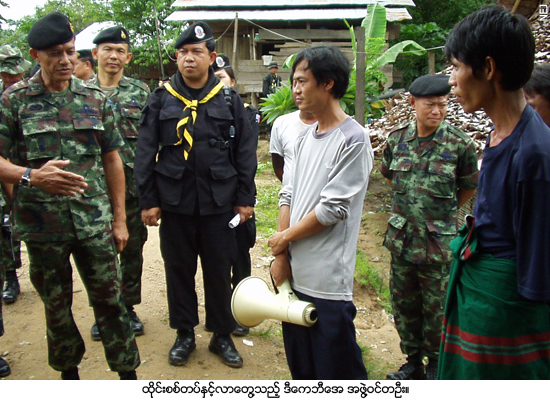 (First Verse)
There is a Lady whom we all love,
Sitting all alone….
In an awful cell inside of **”Moscow Jail,”
Our dear Lady wasting away….

She’s house-arrested for 13 years
Now there’s 5 more years
Will they release her? Will they still keep her?
Now She’s 64

(First Chorus)
In the year of ’88 she led the way to demonstrate
For Freedom for ***Our Cause.
She was almost kil—led…..
All the Ethnic groups give sup-port: Shan, Ka-ren, and More

(Second Verse)
She could have gone back to the UK
To her sons and friends.
Settle down to write a book and go reti(re)
Live in comfort, get her some rest.

But She will not, She’s in for a trial,
And She’s not a-fraid !
Who can defend Her? who can befriend Her?
Now She’s 64. END_OF_DOCUMENT_TOKEN_TO_BE_REPLACED

In the midst of heightened security in the country’s northern Kachin State, Christian prayer services were successfully held in the State’s capital Myitkyina, Waingmaw town and on the Sino-Burma border, said student organizers.

The prayer services featured three factors — lasting peace and triumph with God’s blessings on the birthday of Mrs. Suu Kyi; her release and the ouster of the ruling junta which is brutally ruling over civilians and the emergence of a democratic ruler, said Mr. Tu Awng, a student activist in Myitkyina.

Student activist Mr. Tu Awng added, that each prayer service was attended by more than a dozen people including Myitkyina University students, local people and young Baptist preachers. The services were held at a place on the Sino-Burma border between 8 a.m. to 8:30 a.m., in Waingmaw from 10 a.m. to 10:30 a.m. and in Myitkyina from noon to 12:45 p.m. Burma Standard Time.

“I see Mrs. Suu Kyi as our (ethnic Kachins) mother as well as that of the rest of the country given her commitment to the people of Burma. She needs to be released for democracy to be restored in the country. We will organize more students’ movements till she is freed.” END_OF_DOCUMENT_TOKEN_TO_BE_REPLACED

Father of sixteen-year-old girl asks her to marry friend who attempted to rape her
June 19, 2009
WCRP: On the evening of June 15th, Ma L—L—H— was in her room at her father’s house in Mahachai when she heard a man enter into her room. This man then tried to rape the 16-year-old girl, WCRP learned after speaking with her mother.
The mother added that it was at this time that Ma L—L—H—’s father came home amidst the heated situation. But instead of taking her side, he quickly told his daughter that she was to marry this man, Maung Seik, who was a friend of his.
Ma L—L—H— refused and began to cry. When she refused her father beat her.
The mother, who is divorced and lives in a separate house in Mahachai, said that her ex-husband then again told their daughter, “You have to marry him.”
Crying, Ma L—L—H— pleaded with her father: “he [Maung Seik] didn’t rape me. He is not my sweetheart, and I cannot marry him.”
In traditional Mon Culture, extra-marital sexual relations are considered undignified and oftentimes families have been known to force the victims of sexual violence to marry the transgressor as a way of saving face.
Instead of acquiescing to her father’s demand, Ma L—L—H— fled and moved to her mother’s house, a two-bus trip away, said the mother to a WCRP field reporter. Her mother is a Burmese migrant worker, like her ex-husband and her son (who lives with the father); she is employed at the Thai Union office.
Ma L—L—H— is from Karoat-pi village, Thanbyuzayat Township. She works during the day at the Garland factory in Mahachai and her father also works nights there.
The mother added that 10 people, all migrant workers from Burma, were staying at Ma L—L—H—’s father’s house before her daughter ran away.