Greetings Card Campaign 2008
The annual Greetings Card Campaign brings people across the world in touch with each other in a simple way – sending a card with a friendly greeting or message of solidarity to someone who is in danger or unjustly imprisoned. These are prisoners of conscience, people under sentence of death, human rights defenders under threat because of their work, and others at risk.
The campaign, which runs from 1 November to 31 January, offers hope and encouragement to the people who receive our cards. It can also help bring about change – the impression their international mail makes on police, prison staff or political authorities can help keep them safe.

Send a message of hope
Myanmar (Burma)
Min Ko Naing (PA W U TUN)
Peaceful protester imprisoned
Political dissident Min Ko Naing was arrested and imprisoned for a third time in August 2007 after leading an anti-government protest. A prominent leader of the pro-democracy uprising of 1988, Min Ko Naing previously spent 15 years in prison, many of them in solitary confinement, for peaceful opposition to the government. He could now face up to 20 years in prison.
DETAILED CASE DESCRIPTION
Prominent activist Min Ko Naing was arrested on 21 August 2007, two days after leading a peaceful march in Yangon (Rangoon), Myanmar’s largest city, to protest increased fuel prices. Later that month large-scale anti-government demonstrations were to erupt across Myanmar, the largest protests against the military junta since 1988.
He was arrested with 12 other members of the ‘88 Generation Students group. This group was cofounded by Min Ko Naing in 2005 to renew the pro-democracy activities of those who took part in the 1988 protests.
A veteran campaigner, Min Ko Naing is one of the best-known political dissidents in Myanmar. As chair of the All Burma Federation of Student Unions he was at the forefront of the pro-democracy mass demonstrations that took place across Myanmar 20 years ago. These demonstrations were brutally suppressed by the military junta and an estimated 3,000 people were killed and thousands more imprisoned or ‘disappeared’. For his part in the demonstrations Min Ko Naing was imprisoned for 15 years and finally released in 2004.
Since his arrest in 2007, Min Ko Naing has been detained in Yangon’s Insein prison.
The first hearing of his case took place on 28 August 2008, more than a year after his arrest. He appeared in court alongside 34 others, also detained in connection with the demonstrations. All face a range of politically-motivated charges under laws that include three pieces of security legislation routinely used to prohibit and punish peaceful criticism of the government.
Conditions in Insein prison are poor and Min Ko Naing has been held in solitary confinement for over 23 hours each day. He has been suffering from an eye infection, gout and high blood pressure for which he has received inadequate medical attention. In April 2008, a specialist finally treated Min Ko Naing’s eye infection, but only after after repeated delays. He told Min Ko Naing his eyesight has been affected by his many years in damp prisons.
In June 2008 Min Ko Naing’s health worsened but his request for further treatment was denied and it is unclear if he was subsequently given the necessary treatment. 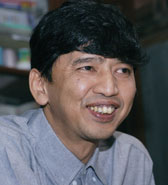 The Friends of Newin faction has been lavishly pampered by the Democrat leadership to the extent that some Democrats feel belittled or disappointed.

Fisherman Htein Lin Aung, a father of three, says a new roof is out of the question as he fixes the engine of his boat beneath the tarpaulin covering of his bamboo tent outside the town of Kungyangon.

“We have been in difficulties since Nargis. The weather is also unusual now,” said Htein Lin Aung, 37, whose house was one of hundreds of thousands destroyed by the cyclone.

The military government relented after a visit from UN Secretary General Ban Ki-moon. But rebuilding the southwestern Irrawaddy Delta, which suffered the brunt of the cyclone, is dragging on. continue http://www.bangkokpost.com/topstories/topstories.php?id=135590

Many Burmese migrant workers have been fired from an electronic products factory in Kilonsisone Moonmai, Mahar Chai area, Western Bangkok Thailand.
The ‘CD factory’, so called by it’s Burmese workers, has fired over 400 employees in two weeks.
Moe Khaing Or Wai, one of the workers who was fired last Monday said “When we arrived at the factory to work the Manager said we had all been fired. It’s not at all fair for us because every month we have paid 600 baht out of our salary for police fees, 200 baht for our bus fare and we lose about 1300 baht a month through paying for our work permit and days absent from work. We are paid 203 baht per day and 38 baht per hour for overtime, but we’ve never got over 2000 a month because they cut out so many ‘fees’ from our wages. My sisters and cousin were fired as well and they haven’t stopped firing people until now. Now there are only about 20 workers left in the factory. We have to find another job after New Year. They said the products were not selling enough and so there isn’t any work that needs doing. However we would like to get back all of the money that they cut from our wages every month”.
read more http://www.ghre.org/en/

The Time is Now

Bangkok, 25 December, (Asiantribune.com): The Thai government has initially decided to hold the Association of Southeast Asian Nations (ASEAN) summit in Bangkok February 13-16, if the dates are agreeable to the Chinese government, according to Satit Wongnongtaey, Minister to the Prime Minister’s Office.However, the exact date of the summit, originally scheduled to be held in the Thai capital this month, is still not fixed as Thailand is still awaiting confirmation of the proposed date from the Chinese government.continue http://www.asiantribune.com/?q=node/14832

Where is an ASEAN role? (from http://www.mizzima.com)