Certain judges in Burma, acting under the orders of Chief Justice U Aung Toe and Senior General Than Shwe, are
themselves criminally liable as co-conspirators to crimes against humanity for their acts in “trying” and
“convicting” 60 political activists last week. “These acts are the latest from the junta which uses the judiciary as
one of its key weapons to commit grave crimes,” says Global Justice Center President Janet Benshoof. Judges
including those listed below are criminally culpable and must be referred to the International Criminal Court.

On November 11th approximately forty pro-democracy dissidents received prison sentences of up to 65 years. On
November 13th twenty more activists were sentenced to terms ranging from 41⁄2 to 91⁄2 years. The convicted include
members of the ‘88 Generation Students, labor rights activist Su Su Nway, musician Win Maw, HIV/AIDS activist
Than Naing, blogger Nay Phone Latt, and members of Daw Aung San Sui Kyi’s party, the National League for
Democracy. Even the defendants’ lawyers were not immune from the regime’s revenge; in October defense lawyers
Nyi Nyi Htwe, Aung Thein and Khin Maung Shein were sentenced to between four and six months imprisonment
for submitting a complaint about the unfair trial conditions of eleven NLD activists.

Judges did not allow the defendants to question prosecution witnesses, many defendants did not have legal
representation and those that did were not permitted to meet with their lawyers in private. Burma Lawyers’ Council
General Secretary U Aung Htoo stated, “Rule of law in Burma cannot even be dreamt of when the judiciary has
become an instrument of political oppression, exercised by the SPDC military junta.”

United Nations Special Rapporteur on Human Rights in Burma, Tomás Ojea Quintana, said this past week in
reference to these convictions, “There is no independent and impartial judiciary system [in Burma].” However, the
judges actions go much further; these prison sentences are crimes under the Rome Statute of the International
Criminal Court, including violations of Article 7(1)(e) “Imprisonment or other severe deprivation of physical
liberty in violation of fundamental rules of international law” and 7(1)(h) “Persecution against any identifiable
group or collectivity on political, racial, ethnic, cultural, religious, gender…or other grounds”.

GJC President Benshoof noted that top judges in Hitler’s criminal regime were convicted as co-conspirators of
crimes against humanity and, more recently, in the Dujail1 decision, the Iraqi High Tribunal found Judge Awad
Hamed al-Bandar jointly criminally liable for crimes against humanity committed with Saddam Hussein because he
used the façade of “judicial authority and law” to “try” and then “execute” civilians. Burma Lawyers’ Council and
Global Justice Center urge the international community to expose the regime’s criminal partnership with members
of the judiciary and to join the call for a UN Security Council referral of all grave international crimes in Burma to
the International Criminal Court.
http://www.globaljusticecenter.net/Unlawful%20Convictions%20press%20release.pdf 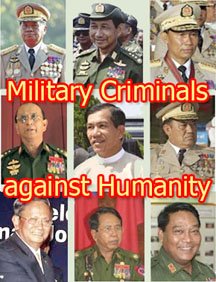 Karen State, Burma
19 December, 2008
While providing humanitarian assistance at an IDP hiding place, we were shown a new landmine that the Burma Army is using against villagers in this area. We don’t know who is making it and no one here has seen it before. It was found alongside the Kyauk Kyi – Hsaw Hta road near Muthey in Ler Doh Township. The Burma Army is placing these and other mines to block movement by the Karen people in this area. We will try to find out who is providing the Burma Army with these mines or if they are producing it themselves as none of us have seen this type either.

……After Depayin Massacre in 2003, US Congress and President enacted “Burma Freedom and Democracy Act of 2003, Public Law 108-61, 108th Congress”. It is “to sanction the ruling Burmese military junta, to strengthen Burma’s democratic forces and support and recognize the National League of (for) Democracy as the legitimate representative of the Burmese People”.

As the General Assembly has stated in numerous resolutions, the junta, State Peace and Development Council (SPDC), continues to violate international law and treaties, domestic law including election law, and their agreements with the people. read all
http://www.ncgub.net/article.php/20081210123449173

Nineteen North Korean defectors will stand trial in Myanmar on charges of illegally entering the country after they were arrested while en route to South Korea from China, Radio Free Asia said Saturday.

The defectors — 15 women and four men — had planned to disembark from their speed boat in Thailand but because of tight inspections there traveled further on to a Myanmarese region on the Thai border, where they were arrested on Dec. 2, the U.S.-based radio station said.

The North Koreans included an elderly man and a child, it said.

Myanmarese immigration authorities have transported the group from a detention center where they were being held to a prison where will await trial that is expected to open next week, it said. They could face up to a year in prison according to Myanmarese law, the report added. http://enews.mcot.net/view.php?id=7782&t=5

Friday, 19 December 2008
Having gotten off to a late start, the EarthRights Burma School is making great progress in training the next generation of grassroots human rights and environmental activists. Dr. Daniel Aguirre, one of the school coordinators, provides the most recent update. http://www.earthrights.org/content/view/594/41&lang=/